Fast and volumetric heating behavior of microwaves is attracting attention for their application in continuous flow synthesis of specialty chemicals. However, the use of tuned microwave field even in small defined reactors does not always provide the expected temperature patterns.1,2 This is majorly due to a lack of position specific information with respect to velocity profile of liquid. Additionally, the accuracy of these predictions in microwave heating is limited when no space distribution of volumetric heating source is considered.1 Understanding the space distribution of microwave heating process with detailed modeling is a prerequisite for process development and control. In this work, we take a closer look at the influence of liquid velocity profiles on the axial and radial temperature profiles in a tubular microwave integrated millireactor combined with a heat exchanger (Figure 1a).

Horizontal co-current flow of a reactant (ethanol) and a microwave transparent coolant (toluene) was established in a teflon supported quartz tube (i.d.: 3 mm, o.d.: 4 mm) and shell (i.d.: 7 mm, o.d.: 9 mm), respectively (Figure 1a). The co-current flow of coolant was assumed to avoid overheating of the reactant by inherently fast microwave heating. The reactor was inserted in a microwave cavity with a length of 47 mm. The physical model included electromagnetic interactions, fluid dynamics and heat transport (Figure 1b). The temperature and flow profiles were obtained in a 3-D domain using the COMSOL software. As the dielectric properties of the reactant were changing with temperature, it was expected that they should influence the heating rate. However, this effect was of minor importance (Figure 1c) and the remaining simulations were made in a 2-D domain. Effect of gravitation was observed due to horizontal arrangement of the reactor-heat exchanger. The effect of gravity was clearly pronounced in the coolant flow where a recirculation pattern was observed due to difference in density (Figure 2). The coolant flow rate had a minor effect on temperature profiles and energy dissipation at a high heating rate  of 180 °C/s (Figure 3, a and b). Higher temperatures were observed at the wall (stagnant liquid films), leading to drastic drop in the energy dissipation (Figure 3, c and d). The laminar flow of ethanol was disturbed by a temperature probe (Figure 4). The probe was inserted either from the outlet (Figure 4a) or inlet (Figure 4b) side of the assembly. In the former case, measured temperature was lower as compared to the latter case (Figure 5). This effect could be explained by local hydrodynamics near the tip of the probe. When the probe was inserted from the outlet, the highest velocities were found at the tip. Conversely, when the probe was inserted from the inlet, a stagnant film assured lowest velocity at the probe tip. These observations were then validated by experiments (data points, Figure 5). The temperature profiles obtained by the modeling study agreed with the experimental observations.

The stagnancy of the flow of the microwave absorbing fluid influenced the temperature distribution in a microwave integrated flow reactor. The buoyancy influence (as a result of gravitational forces) was already visible for horizontal arrangement of reactor-heat exchanger assembly at millimeter sizes. The stagnant layer formation caused by any insertion or at reactor walls yielded higher temperatures and lower energy dissipation regions. The coolant flow, unless used as a heated jacket to minimize heat losses, was found to be ineffective. Lastly, complex 3-D geometry modeling efforts can be eliminated at very early stages unless there are specific disturbances in electric field pattern. 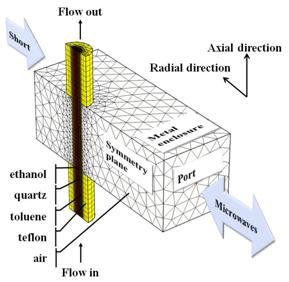 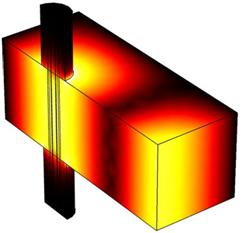 Figure 2: Effect of buoyancy in a horizontal arrangement of the microwave integrated reactor-heat exchanger assembly. Gray lines (with thickness indicating the strength) show velocity profiles of coolant. Axially sectioned colored pattern shows temperature in the reactant as well as the coolant section. 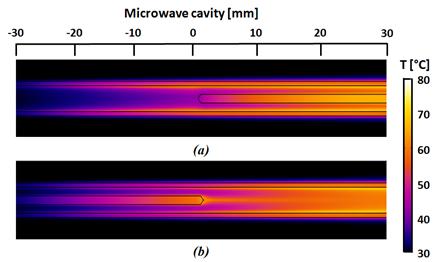 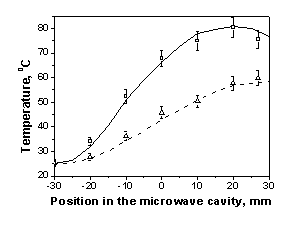