278630 A Comparative Study On Bubble Velocity in Mini Channels

A comparative study on bubble velocity in mini channels

A current trend in chemical reaction engineering are catalytic reactions in mini channels. This is based on the successful implementation of monolithic catalysts in the automotive industry as catalytic converters since the mid-1970's. The application of this structured catalysts in gas-liquid-solid-reactions is discussed in literature [1]. But this implies a deep understanding of the hydrodynamics in the channels for a better prediction of mass transfer and reaction kinetics. Additionally, scale up for large throughputs would be easier when the hydrodynamic processes are clearly understood.

Taylor Flow, an alternating liquid and gas slug flow, is the mostly preferred flow regime in mini channels. It provides a high mass transfer and a quasi periodic process. For this reason many correlations exist to predict the particular parameters of the flow like bubble length, bubble velocity or film thickness. In the following study present correlations were tested and evaluated by means of two experimental studies. Thereby, two liquids with highly differing properties were used to test the validity of the models over a wide range. Additionally, the influence of the channel material (fluid - wall contact angle) was tested.

In this work a first study was based on a single channel experiment. A high viscous medium, squalane (0.029 Pa∙s), was used as liquid phase and nitrogen as gas phase. Liquid and gas superficial velocities were varied between 0.02 - 0.3 m/s respectively 0.04 - 0.5 m/s at an absolute pressure of 1 bar and a temperature of 293 K. The experiments were conducted in downstream. Due to the transparency of the used acrylic glass channel, a high speed camera HCC 1000 combined with a computational evaluation of the images was used to determine bubble velocity. The channel had a square cross section with a hydraulic diameter of 1 mm.

A second series of downflow experiments was executed in a ceramic monolith. Here the channels had a square cross section and a hydraulic diameter of about 1 mm, too. The liquid phase consisted of deionized water and pressurized air was used as the gas phase. Since the monolith is made of an opaque material, optical measurements were not applicable in this case. Consequently, a novel technique with a single tip optical fiber probe was applied here. Bubble velocity was measured at various gas and liquid flow rates (uG: 0.009 m/s - 1.1 m/s; uL: 0.05 m/s - 0.3 m/s), whereas a uniform phase distribution all over the entrance cross section of the monolith was assumed.

In open literature various theoretical models were presented to predict bubble velocity on the basis of geometric and fluidic parameters. Four models were considered in this work and had been compared with the experimental results.

The drift flux model provided by Zuber and Findlay [2] was considered first (eq. 1). It is based on the two phase velocity uTP (composed of liquid and gas superficial velocity). The two constants, distribution coefficient C0 and drift velocity u∞, were determined at various experimental conditions. But usually, investigations were based on fluids with properties close to water and not on highly viscous mediums.

The second model was proposed by Thulasidas et al. [3]. The model is based on bubble shape and uTP (eq. 2). It includes the liquid film between bubble and channel wall. Thulasidas et al. [3] investigated different fluids and demonstrated the validity also for a wide range of viscosities (0.001 - 0.971 Pa∙s).

Abiev [4] presented a model in 2008 which is rarely confirmed by other experiments to this time. In this work a model is demonstrated based on mathematical derivations (eq. 3). The model contains empirical constants, which vary for different flow directions. This was the first time flow direction was included in considerations.

The last model which was included in the current study was published by Liu [5]. It is based on uTP and the Capillary Number Ca (eq. 4). 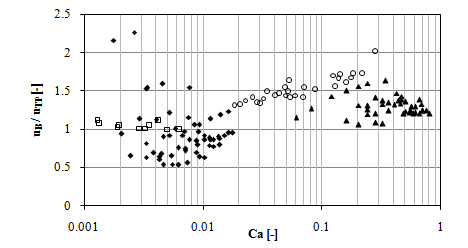 However, the measured relations in our data show a higher scatter, which could be based on the respective measurement techniques and on the different hydraulic diameter of 1 mm instead of 2 mm in Thulasidas et al. Furthermore, the curve of Thulasidas et al. should be shifted to a lower uB/uTP - relationship to fit better with the experimental results of the current work.

The experimental series based on air-water-system showed various conformances of the other described theoretical models with the experimental data. In Figure 2 an overview is presented. 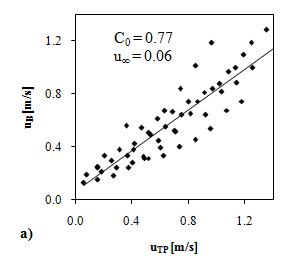 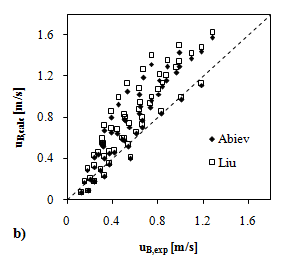 Figure 2: Experimental data in the monolith (water-air system) compared with a) drift flux model [2] b) correlations of Abiev [4] and Liu [5]

It was noticeable that the experimental results had a relatively high agreement with a linear approximation structured like the drift flux model. But compared to recent work (Figure 2 a) the distribution coefficient C0 was obtained to be much lower than in open literature, where it was determined to values between 1.1 and 1.3. Whereas, the data of Abiev [4] and Liu [5] fit for low bubble velocity, but deviation and scatter increase at velocities higher than 0.4 m/s.

The experiments with squalane in a single channel showed the following behaviors (Figure 3). 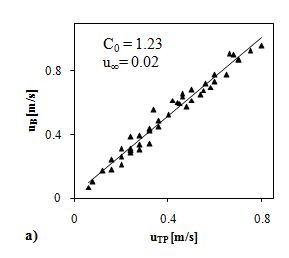 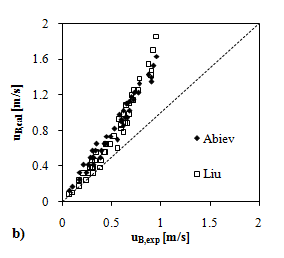 Figure 3: Experimental data in the single channel (squalane-nitrogen system) compared with a) drift flux model [2] b) correlations of Abiev [4] and Liu [5]

Also a linear behavior was observed for a highly viscous fluid. A linear approximation found C0 closer to literature values than in the monolith, but in both cases the u∞ was gained as a positive value. Comparing the squalane-nitrogen experiments with the models of Abiev [4] and Liu [5] (Figure 3 b) it is recognizable that there is a similar trend to the water-air experiments (Figure 2 b). In both cases the models overpredict the bubble velocity for higher uTP.

Principally, the measurements in single channels and in monolithic channels showed the same behavior with respect to various bubble velocity correlations. Therefore, the errors due to maldistribution or the application of various measurement techniques were negligible. Overall, the drift flux model was concluded to be the best one. The experiments showed a linear dependence of bubble velocity from uTP respectively Ca. This model was flexible enough to fit to each experimental setup. Finally, the empirical parameters C0 and u∞ were suggested to depend on geometric and fluidic parameters. This should be an important issue for future experiments. By means of different fluids and experimental parameters C0 = f(Ca) or u∞ = f(Ca, flow direction) the detailed dependencies have to be figured out to predict bubble velocity without experimental work.

The authors highly acknowledge the Ernest-Solvay-Foundation for funding the experiments with the entire monolith. Furthermore the authors acknowledge Corning Inc. for providing the monolith.