Repair of large segmental bone defects, i.e., critical-sized defects, which occur due to blunt trauma, tumor resection surgeries, pathological degeneration and congenital deformities, are challenges for orthopedic surgery [1-4]. Currently, about 5-10% of procedures applied to repair critical-sized defects result in delayed unions or non-unions [1-2]. Autografting is still the “gold standard” in clinical bone repair procedures [3,5-7]. However, up to 30% of the autografting procedures have complications associated with the donor-site morbidity, limited tissue availability, varying quality and longer hospital stays [6-8]. Other alternatives, i.e. allografts and xenografts, suffer from limited sources of supply, contamination risks, immunogenic incompatibility and inability to incorporate with the host bone [3,7,8]. Designing synthetic bone grafts offers an alternative route in treatment of critical-sized defects [1-8]. Clinical trials have demonstrated the possibility of using metallic, ceramic and polymeric bone graft substitutes [5,9-14]. It is generally understood that the bone grafts need to be (i) biocompatible, (ii) preferably bioresorbable to prevent second surgery for removal after full recovery or due to late immunologic response, wear or dislodgement, (iii) mechanically adequate and stable until functional bone tissue forms within the defected area, and (iv) most importantly osteoconductive and preferably osteoinductive [1,6-8,12].

A second approach, i.e., bone tissue engineering, attempts to utilize porous polymeric scaffolds which are typically seeded with patient's own stem cells.  Tissue constructs are formed upon the proliferation and differentiation of the cells on the scaffold within a bioreactor and implanted to defect site. Typical polymeric materials for such tissue engineering scaffolds are polyglycolide, polylactide, polycaprolactone (PCL) and their copolymers or their biocomposites with particles like hydroxyapatite and tricalcium phosphate as well as other bioagents like growth factors [6,7,9-14].

Problem statement: The designing and fabrication of bioresorbable polymeric bone graft substitutes and porous scaffolds for bone graft substitutes and tissue engineering are both challenged by the complex structural and compositional gradations found in human tissues [15,16]. For example, it would be desirable for the bone graft substitutes used in the repair of critical sized defects in long bones like femur and tibia to accommodate their changing porosities and moduli along their transverse and axial directions [17,18]. Therefore, mimicking of such complex gradations found in native tissues can require correspondingly complex gradations in bone graft substitutes and tissue engineering scaffolds which exhibit tailored three-dimensional distributions in composition, structure and properties.  Conventional methods of generating graded scaffolds include layer-by-layer casting, freeze-drying, phase separation, and rapid prototyping techniques including fused deposition modelling, 3D printing, selective laser sintering, and stereolithography [15,16]. These methods have recently been supplemented via scaffold fabrication methods that are within the arsenal of the chemical engineering profession and that rely on the twin screw extrusion process as a base, i.e., twin screw extrusion and spiral winding, twin screw extrusion and electrospinning and co-extrusion to furnish additional flexibility in design and manufacturing of tissue engineering scaffolds [19-27].

The tools of chemical engineering that have been applied to generate the new methods based on extrusion, co-extrusion and fiber spinning/electrospinning include the solution of the coupled transport equations to mathematically model and simulate the thermo-mechanical history of the biopolymers and biosuspensions in the extruder and the die (to provide mixing effectiveness, stress, velocity, temperature, and residence time distributions) in conjunction with rheological characterization of the material functions, the characterization of  microstructural distributions and mechanical properties of the scaffolds and assessments of the biocompatibility of the scaffolds graded in porosity and bioactive concentrations to determine cell proliferation and differentiation principally using histology and PCR analysis [19-27].

Examples of extrusion based methods developed and applied to generate functionally-graded bone graft substitutes and scaffolds: In twin screw extrusion and spiral winding the extrudates, the composition and porosity of which can be altered as a function of time, are wound on a simultaneously translating and rotating mandrel to generate radially and axially-graded scaffolds [21,22]. The twin screw extrusion process can also be applied concomitantly with electrospinning to generate nanofibrous meshes which can be graded with porosity, pore size and bioactive concentration distributions [19,20,23].

For example, concentration gradients of  two bioactives, ß-gloycerophosphate and insulin could be generated using TSE-electropinning. The regions that are rich in insulin were determined to give rise to chondrocytic differentiation of adipose-derived stem cells, whereas the regions that were rich in ß-gloycerophosphate were determined to furnish greater degree of mineralization [23].  Finally,  axially and radially graded scaffolds of PCL could be fabricated via the co-extrusion method to generate distributions of porosity, pore size and concentration distributions of TCP and HA in both the axial and radial directions (cage/core structures). The modulus of the co-extruded scaffolds could be manipulated systematically in both the radial and axial directions. When tissue constructs were generated by seeding bone marrow derived stem cells onto the co-extruded graded scaffolds and samples were harvested as a function of time during cell proliferation and differentiation in media, the gene expression levels and µ-CT analysis revealed the osteogenenic differentiation, bone ECM formation and mineralization as affected by the gradations of the bioactive ingredient, i.e., HA and TCP concentrations [24- 27].

Conclusion: During the last three decades the chemical engineering profession has gained specialized capabilities in rheology, mathematical modeling and simulation on various types of extrusion and fiber spinning methodologies, microstructural analysis and tailoring, and development of mechanical properties to allow the development of extrusion based technologies for the development of bone graft substitutes and tissue engineering scaffolds. The role of chemical engineering is expected to increase with greater utilization of these industrially-relevant methods upon commercial scale implementation to advance patient care by providing better graft substitutes and scaffolds which better mimic the complex elegance of native tissues. 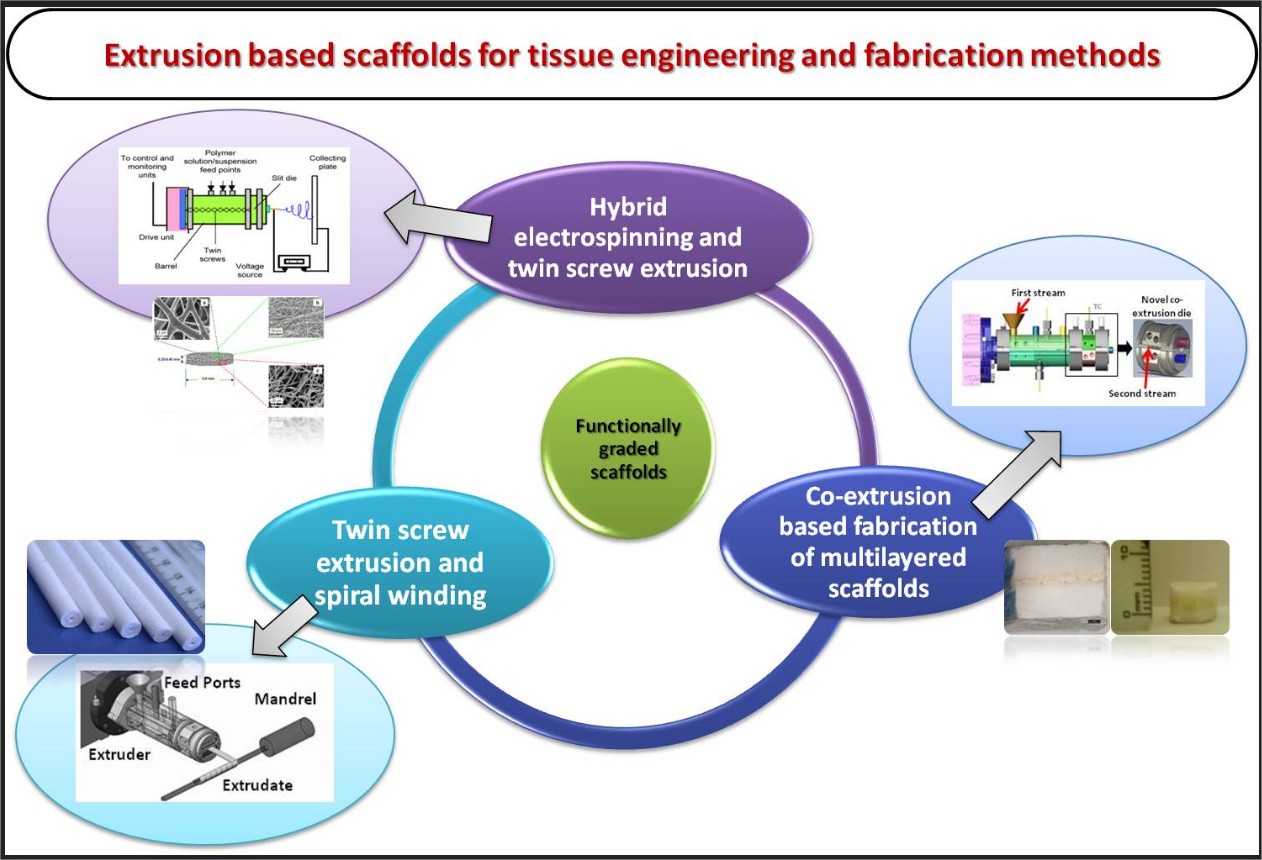