The main objectives of this study are: to develop reactivity tests for ethane oxidative dehydrogenation (ODH) on a 7.5 wt. % VOx/γ-Al2O3 catalyst under oxygen-free conditions, to elucidate the mechanistic reaction steps involved in the catalytic ODH of ethane and to establish a heterogeneous kinetic model that describes ethane ODH on the prepared catalyst.

The catalyst was prepared by wet impregnation method with Gamma form of alumina as support and vanadium III acetyl-acetonate V (AcAc)3 as precursor. Reaction experiments were developed in a novel Chemical Reactor Engineering Center (CREC) mini-fluidized bed Riser Simulator. Reaction runs were carried out in the CREC fluidized bed riser reactor at reaction temperatures between 550-600 oC and under atmospheric pressure and oxygen free atmosphere.  A number of physicochemical techniques were used to characterize the prepared catalyst.

The prepared catalyst showed very stable reduction behavior during consecutive TPR cycles with 550 oC as reduction temperature (Figure-1). Given the results obtained from experiments in oxygen-free environment, it appears that lattice oxygen is involved in the catalytic ODH reaction where prepared catalyst displayed promising ethane conversions (6.47-27.64%), ethylene selectivity (57.62-84.51%) and catalyst stability during ethane ODH at 550-600 0C (Figure-2). A rate equation is developed based on a lumped model using Langmuir-Hinshelwood kinetics. The proposed kinetic model satisfactorily predicts the ODH reaction of ethane under the selected reaction conditions. 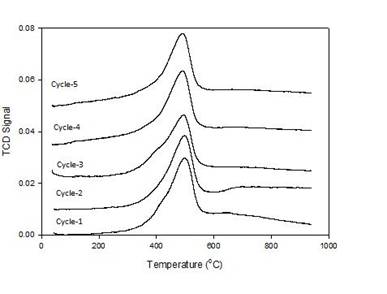 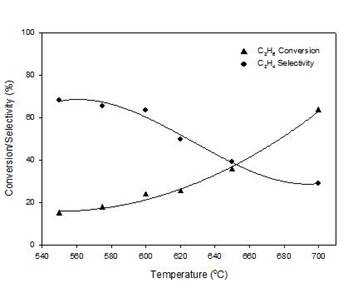 The development of a very stable and selective catalyst for ethane ODH is a major challenge that has to be overcome to have available a viable alternative and less energy demanding ODH process for olefin production. These new process will likely involve fluidized beds and as a result a selective fluidizable catalyst is the key for successful implementation of future ODH processes.