The occurrence of complete or partial solid solutions in solution crystallization is still the focus of several recent investigations. One reason is that the underlying mechanisms of the formation of mixed crystals are not clarified in every detail. On the other hand this special solid liquid equilibrium (SLE) limits the applicability of commonly used crystallization processes and complicates separation tasks. Especially for pharmaceuticals this can lead to a huge economical drawback.

Process design for crystallization from solution is mainly based on the solid-liquid equilibria (SLE) of the substances of interest [1]. For the, in case of ternary mixtures, commonly appearing simple eutectic and intermediate compound-forming systems several opportunities for crystallization based separation from a solvent are known and are well understood, e.g. processes based on applying preferential crystallization in case of two dissolved enantiomers. Besides, the tie lines of systems involving solid solutions do not lead to a corner of the pure substance in the ternary phase diagram (figure 1). Therefore it is not possible to separate these mixtures within one crystallization step and there is no option to apply the commonly used crystallization processes. For many examples such a miscibility behavior is published including inorganic systems like salts containing one common ion [1, 2] or simple organic substances like amino acids [3]. For more complex chiral molecules the occurrence of complete mixed crystal formation seems to be rare [4]. However, there are more cases reported where partial solid solutions are present at the pure enantiomer side of conglomerate and racemic compound-forming chiral systems.

Some theoretical studies suggest a separation opportunity based on fractional crystallization [5-7]. By means of repeated dissolution and crystallization it is possible to separate systems forming solid solutions. This principle can be realized by exploiting a cascade of batch crystallizers. Furthermore, it was shown that a counter-current between the solid and liquid phase in such a process would lead to optimal process performance in terms of yield and productivity. Nevertheless, realization and automation of a counter-current crystallization cascade is quite complicated. Between every crystallization stage a solid/liquid separation is required. Additionally, the automatic transport of the crystalline solid phase between the stages is difficult and would lead to huge instrumental effort. 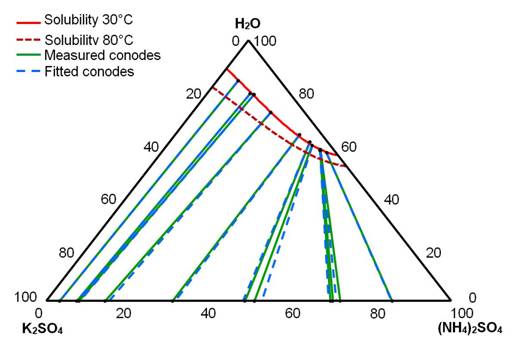 Recently an automatic counter-current crystallization cascade was developed by the HAPILA Gera GmbH [8]. In this plant exclusively liquid phases are transported. The solid phase is dissolved after the crystallization to avoid the expensive transport of the crystalline phases in the solid state. Hence, it is possible to proof this up to now only theoretically considered separation opportunity for systems involving solid solutions.

In the contribution the SLE of two different systems forming complete solid solutions will be shown. Furthermore, the mathematical description of the process of interest will be explained and verified by a manually operated counter-current crystallization in a rotary evaporator. The validated model was then used to run a semi-automatic pilot plant followed by a comparison of theoretical and experimental results. Finally a partial solid-solution forming system was theoretically investigated in a simulation study.