277166 Application of Euler-Lagrange Approach to Predict the Multiphase Flow with Simultaneous Heat and Momentum Transfer, and Solidification Predicted by A Shrinkage Unsolidified Core Model

ABSTRACT – The main objective of this work consists in the mathematical formulation of the gas-liquid system with simultaneous heat and momentum exchange and solidification phenomenon, followed by numerical simulations to predict the main phenomenological characteristics of this process. The mathematical modeling uses an Euler-Lagrange approach and the models are solved with volume finite method present in commercials CDF codes. Physical properties of discrete phase like specific heat are estimated as a function of temperature through correlations based on contribution groups. The prediction of solidification consists in applying a shrinkage unsolidified core model that determines the evolution of the solid thickness formed inside the droplets during solidification. The solidification phenomena and the physical properties needs to be numerically implemented through sub-routines, programmed in C language, and linked in the commercial CFD code. The models and the sub-routines need to be evaluated, and test cases are performed to prove physical consistency and the results can be compared to previous works. The simulation results show physical consistency of the model. Therefore, this models and sub-routines can be applied to industrial case. Finally, through the analysis of the results, seeks to consistent data and information that allows a better understanding about the multiphase flow present in granulation towers and the influence of solidification phenomena in heat transfer between phases, and the impact of this in the quality of the final product.

In granulation process, the melt is sprayed in the top of a cylindrical tower where droplets are formed and they fall downward in counter-current with ambient air, which cools and solidifies the droplets, before they are collected in the bottom of the tower. It is observed in practice that the main problem is the deficiency in the solidification process. This can cause operational problems and bad quality of the grains and, consequently, lost productivity and profits. Often, when the grains are not completely solidified, it could break either by collision between particles, but also on the walls of the tower, creating a kind of "cake". It has been believed that the incomplete solidification of some droplets is due to formation of the solid thickness inside the droplets which decrease the heat transfer between both phases because of an additional conductivity resistance inside the droplets. Thus, there is a motivation to investigate and analyze these aspects to understand these problems and solve them.

The mathematical modeling uses an Euler-Lagrange approach and takes into account some hypotheses:

·         the air is the continuous phase and its modeled in a Euler framework;

·         the droplets are the discrete phase and are modeled in a Lagrange framework;

·         the continuous phase under turbulent conditions can be represented by RANS equations;

·         phases interact only by exchanging heat and momentum;

·         the interactions between the phases are represented by a two-way coupling;

·         only heat transfer by convection and conduction (during solidification) are considered;

The thermal behavior of droplets passes through three periods:

·         cooling of droplets until solidification temperature;

·         solidification of droplets surface at a constant temperature, progressing until the center of the droplets until complete solidification, where the resistance to the heat transfer due to the formation of solid thickness cannot be neglected;

Additional equations are necessary to represent the interphase heat and momentum transfer and the turbulence. For the interphase momentum transfer it is considered only the drag force which represents the two-way coupling. The thermal exchange between the phases takes into account the convective heat transfer from the droplets surface to the gas, and the conductive heat transfer due to the formation of a solid thickness during solidification; so this term is represented by an overall heat transfer coefficient, and these terms represents the two-way coupling. An average procedure is applied to transform the conservative equations, which are instantaneous in time and space, in average equations, resulting in the Reynolds Average Navier-Stokes (RANS) equations (Wilcox, 1994). The turbulence is modeled with standard

model (Wilcox, 1994). The discretization method used is the Finite Volume Method (FVM) (Maliska, 1995) present in the software FLUENT 13.0 from ANSYS® (ANSYS, 2010). From Figure 2 to Figure 6, it is presented the synthesis of the model, which includes the Euler-Lagrange conservative equations (Brodkey and Hershey (1988), Meier (2010)), the turbulent equations, the auxiliary equations, and the specific heat for the discrete phase as a function of temperature. 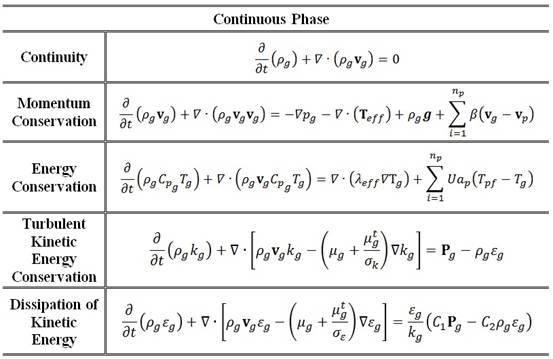 Figure 4 - Physical properties of discrete phase as a function of temperature. 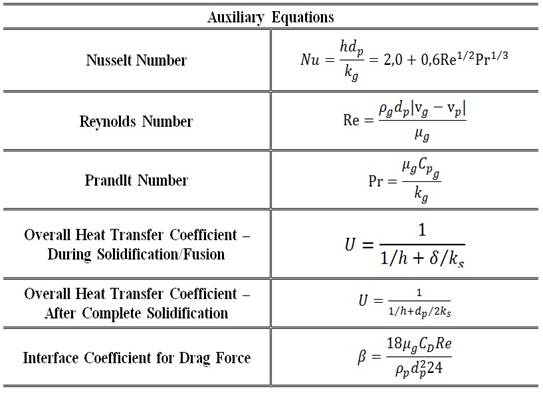 Figure 5 - Auxiliary equations for the model - 1.

Figure 6 - Auxiliary equations for the model - 2.

To analyze the performance of both the mathematical model as its physical consistency (especially during solidification) and the subroutines developed for the calculation of solidification, numerical cases are performed. One three dimensional main case is performed to validate the physical consistency of solidification and fusion. A numerical grid is made for the case (Figure 7) that have two inlets for cold and hot air and two outlets, and one injection of discrete phase (1.2 millimeters in diameter) in top of the tower, which has 60 meters in height and 2 by 2 meters in base. The case is configured so that the droplets are cooled to solidify, and then heated to fuse where cold air enters in the upper inlet of Figure 7 and directed to the top of the tower, and the lower inlet has hot air which is directed to the bottom of the tower.

In Figure 8 it can be noted that, initially, the droplet analyzed is only cooled. Then, the solidification starts, and the solid thickness starts to grow until a maximum value and then, due to the heating of the droplet, fusion starts, and solid thickness starts to decrease until zero, so the droplet it is fully liquid again at the end of the tower. The Figure 9 shows the liquid diameter inside the droplet, which starts constant during the cooling, decrease during solidification, increases during fusion, and ends constant again. 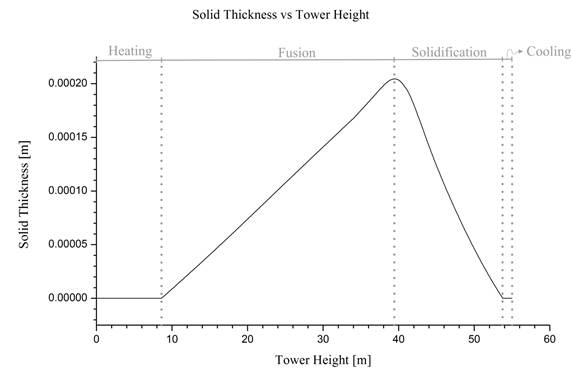 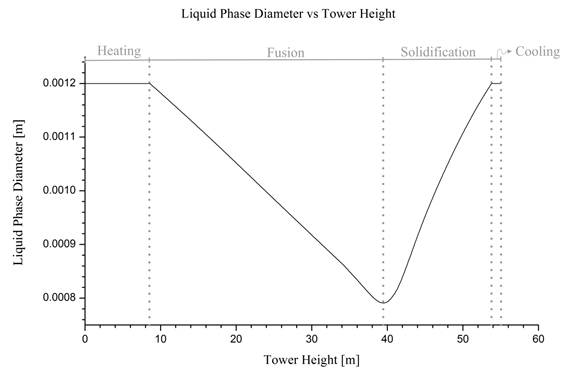 Figure 9 - Liquid diameter inside the droplet through the tower height.

In Figure 10, the coefficient initially decreases due to the velocity reduction when the droplet is injected in the tower (during cooling period). In solidification period, it decreases due to the formation of the solid thickness, which produces a conductivity resistance to the heat transfer and in fusion period, it stars to increase due to disappearance of the solid thickness. Finally it becomes constant, because in this period there is only convective resistance, which became constant because the particle has reached its terminal velocity. Figure 11 shows the temperature behavior of the droplet/particle. 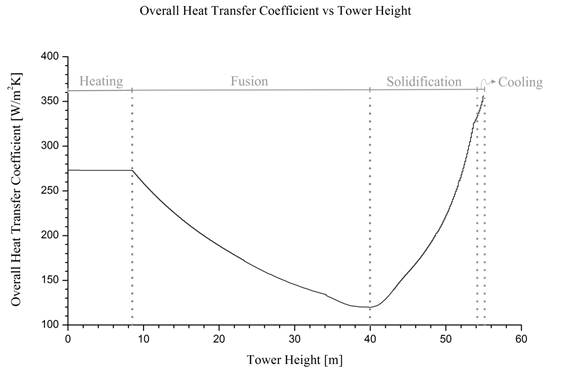 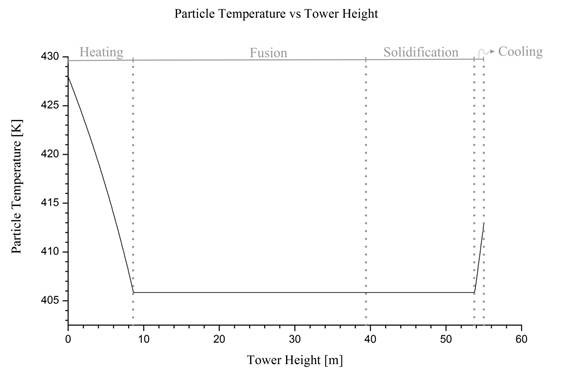 A three dimensional simulation was carried out to prove physical consistency of the model. The results showed that the model is able to predict the solidification and fusion phenomena and has physical consistency. Now the model can be applied to an industrial case and compared with experimental data and previous works.