In the last decade there has been extensive research on the mechanical properties of biological walls, using in particular atomic force microscope (AFM) and compression testing by micromanipulation. Small indentation experiments using AFM and sharp indenters consistently give an elastic modulus (E) of the yeast cell (Saccharomyces cerevisiae) wall of 0.2-1.6 MPa [1], whereas micromanipulation and other large deformation techniques generate values of 100-200 MPa [2]. No explanation has yet been reported to account for this difference of two orders of magnitude. It will be shown here using finite element modeling (FEM) that the Hertzian equation used to calculate E from AFM data is inappropriate for core-shell spheres like yeast cells. Secondly, a double-layer cell wall model is presented to explain the difference in E values obtained with the AFM and micromanipulation  techniques.

Finite element modelling (FEM) was performed using ABAQUS/Standard 6.5. Half core-shell spheres were simulated in 2D under axis-symmetrical conditions, as performed previously for the compression of microcapsules with a core-shell structure [3]. The AFM indenter and the bottom substrate were modeled as rigid materials, while the cell wall was modeled using 7100 deformable CAX4RH elements; the mesh size was more refined close to the indentation area (see Fig. 1). For a double -layer wall, a second shell was introduced under the previous external layer using 1500 CAX4RH elements. The liquid core was modelled using FAX2 elements with a density of 1 kg L-1. The wall material was modeled as isotropic and linearly elastic; a Hookean approach has been considered as it has been shown to be a good mechanical model for the yeast wall up to very large deformations [1]. Different inner pressure values common for yeast cells were also modelled.

AFM compression studies commonly calculate the mechanical properties of the cell wall using the Hertzian equation (1), assuming a spherical shape of the indenter:

where rind is the indenter radius and dind is the indentation depth. However, this equation cannot be used for core-shell spheres, a possible model for yeast cells, because of the significant inward bending of the wall, as shown in Fig. 1, regardless of the inner pressure. The displacement of the indenter tip (d) is much larger than dind. In practice, what has been calculated is a pseudo Hertzian E assuming dind = d. Considering this, the E values reported with AFM for yeast cell are underestimated by 5-10 times.

Figure 1: FEM results showing compression with a sharp indenter, for a displacement twice the wall thickness (d = 2h), yet the penetration indentation is dind ~0.18h.

The common assumption of all previous biomechanical studies is that the yeast cell wall is homogeneous, although possibly having chitin-rich bud scars. However, there are two very different layers in the yeast cell wall encapsulating the plasma membrane. The outer layer is comprised of mannoproteins, reported to control the cell porosity, while the inner layer is composed of b1,3-glucan and chitin, which is believed to impart mechanical strength to the cell wall [4].

A FEM model was constructed for a double-layer wall with different thickness and elastic modulus values, assuming a soft external layer and a stiff inner layer. Micromanipulation experiments were conducted to compress single yeast cells until rupture, which usually occurred at fractional deformations e of 0.6-0.7, defined by the ratio of displacement to initial cell diameter (2r) [1]. Figure 2 shows that using (Eh)total, defined as the sum of (Eh)out and (Eh)in, a unique relationship for the normalized  compression force versus deformation is obtained regardless of the actual elastic modulus values of the two layers within the chosen ranges. Therefore, assuming a double-layer model of the yeast cell wall, micromanipulation results provide (Eh)total, found to be in the range of 11-15 N m-1. 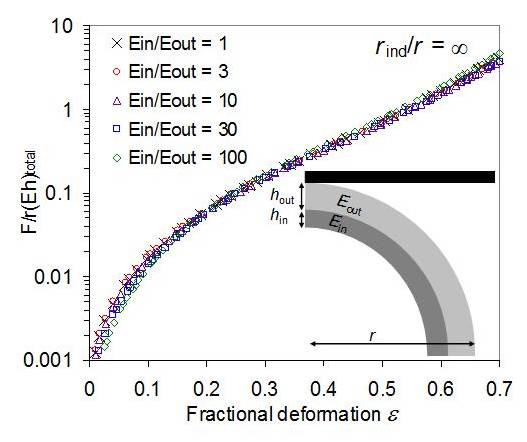 Under a double-layer model, the associated errors in using a Hertzian analysis, such as eq. (1), for the determination of E are smaller than those in the single-layer wall model due to the existence of the stiff inner layer that limits the inward bending of the cell wall. Figure 3 shows that Hertz-like curve fitting can still be performed at small deformations, as also observed for single layers, despite eq. (1) not being fully valid. In addition, the estimated E is close to that of the outer layer. Hence, AFM results using a sharp tip are reasonably correct only if a stiff inner layer is assumed.

AFM and micromanipulation results can be combined to determine the biomechanical properties of the two layers in the yeast cell wall. The external later is characterized with sharp tip indentation, Eout ~1 MPa. For a total wall thickness h of ~130 nm, the thickness of the b1,3-glucan fiber layer (hin) is estimated to be around 10-40 nm. Finally, the elastic modulus of the stiff inner layer was calculated to be Ein ~ 0.3-1.3 GPa depending on chosen value of hin. 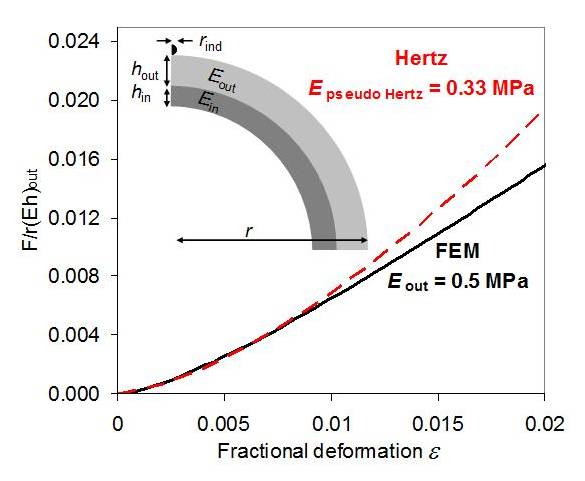 Figure 3: Normalized compression force with the outer wall stiffness using a sharp indenter for a double-layer model with hin/r = 0.8%, Ein = 100 MPa and hout/r = 4.4%. The FEM data has been fitted by Hertzian analysis.

A biomechanical double-layer cell wall model has been developed following the layered structure of the S. cerevisiae wall. Assuming an external soft layer plus an internal stiff layer, it is shown that the reported AFM elastic modulus corresponds to that of the external layer, while micromanipulation results provide the total wall stiffness. The results can be combined, using the thickness of the different layers, to estimate the elastic modulus of the stiff b1,3-glucan layer for the first time.