Most of the current wax deposition models were developed based on the mechanism of molecular diffusion, which was developed by Probjot et. al. (AIChE J. 2000, 46, 1059–1074) and was highly regarded among wax deposition studies. However, our recent analyses have shown that another mechanism might play a role in addition to molecular diffusion contributing to the deposit growth, which is overlooked in most previous studies: at low oil flow rates (i.e. low shear rates), it is expected that not only molecular deposition takes place at the oil-deposit interface, but the wax molecules at the boundary layer might crystallize to form a cross-linked network and help to further grow the deposit. This gelation phenomenon is unlikely to occur at high oil flow rates because the high shear stress tends to break up the crystal network.

The carbon number distribution of the deposit obtained from gas chromatography is a significant indicator of the role of gelation in the wax deposit growth. As the solids in the deposit consist of mostly the heavy components, a higher mass fraction of heavy components in the carbon distribution indicates a larger amount of solid formed. The difference in the carbon number distribution between the deposit and the oil (above the WAT) is that the heavy components are enriched in the deposit due to the diffusion of wax molecules (heavy alkanes). As the diffusion-driven formation represents the continuous radial transport of wax molecules depositing on the interface and diffusing into the gel, its resulting deposit is expected to contain more solids than a gelation-driven deposit. Consequently, the deposit formed mainly by diffusion-driven deposition is expected to have higher mass fractions of heavy alkanes than that formed by gelation. The overall relationship between the flow rate and carbon number distribution in GC is shown in Table 1. 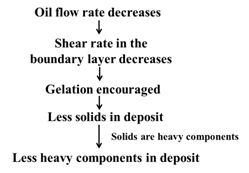 The GC analyses of the deposits obtained from flow-loop experiments have been carried out and the results are shown in Figure 1.

It is clearly seen that the carbon number distribution of the experiments can be divided by two groups of experiments that are formed by two drastically different mechanisms. The experiments carried out at relatively low flow rates and low wall temperatures (Group A) show very small amounts of heavy components (low solid fraction) in the deposit, indicating that the deposit is gelation-driven. The experiments at relatively high flow rates and high wall temperatures (Group B) show a great contents of heavy components (high solid fraction), which implies that the deposit is deposition-driven.

Therefore, a fundamental investigation of the role of wax gelation in wax deposit growth will be carried. The work will start with several rheometric experiments to investigate the effect of shear history and cooling rate on gelation temperature. The goal is to quantitatively describe the gelation phenomena and develop a theoretical model for gelation kinetics. The finally purpose would be to incorporate the gelation model into the current wax deposition models to improve the prediction quality.