Liquefied petroleum gas (LPG) is an important by-product from petroleum refining and can be converted to acetylene by plasma pyrolysis. In this work, we employed a density functional theory (DFT) to investigate the reaction pathways of propane and n-butane, the main components of LPG, for understanding the LPG pyrolysis in hydrogen plasma. Over sixty possible reactions were considered. The reaction enthalpies and activation energies of these reactions were calculated with a Gaussian method of B3LYP and basic set of 6-31G (d,p), and then analyzed. The results indicate that the main products of LPG pyrolysis are acetylene, ethylene, methane, ethane and hydrogen. Ethylene mainly comes from the decomposition of n-C3H7, n-C4H9 and C2H5 radicals. High temperature facilitates the formation of acetylene from propylene and ethylene. Methane and ethane are produced during the quenching process through the combination of methyl radicals with H radicals and themselves. There are many hydrogen abstraction reactions, and they are responsible for the production of hydrogen gas. Active H radicals in hydrogen plasma were found to play a very important role in reactions, because they can remarkably lower the energies needed for reactions. The main routes of the pyrolysis of propane and n-butane in plasma can be summarized as following: 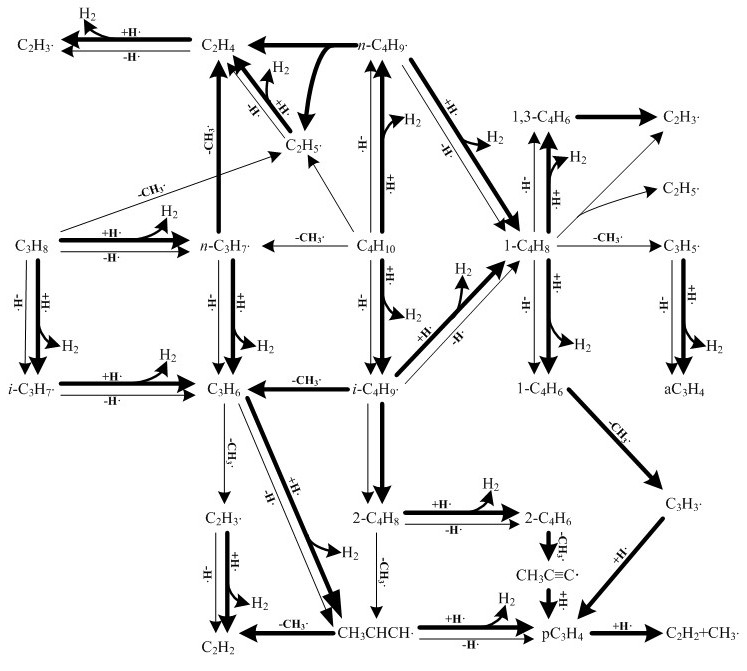