We have made a novel approach to realize liquid phase WGS reaction through sequential continuous reactions of i) catalytic carbon monoxide hydration using a homogeneous Ru-edta complex [1] and ii) heterogeneous formic acid dehydrogenation using a PtRuBixOy which was reported by our group previously [2]. The approach put forward and the process discussed here is to use carbon monoxide to produce hydrogen through a liquid phase water-gas-shift reaction. Formic acid is formed through a catalyzed reaction (2) shown above and then decomposed catalytically giving out hydrogen and carbon dioxide as the reverse of reaction (1).

Reaction (4) thus shows the possibility of a liquid phase WGS reaction. Conventional WGS reaction of (3) is catalyzed by oxides of iron and chromium occur at temperatures between 250-600 ⁰C. The hydrogen produced still contains carbon monoxide which has to be removed further removed for majority of applications. Studies on WGS reaction reported in literature suggest three dominant mechanisms through formates, carbonates, or redox reactions. There have been many reports on both homogeneous and heterogeneous catalysts for forward and backward reactions of (1). With increasing attention on the formic acid dehydrogenating catalysts, attempts are made to device processes which can lead to energy efficient, zero-carbon hydrogen production.[3]

Figure 1 is a schematic of the setup used for the liquid phase WGS reaction. Catalysts were synthesized and characterized using scanning electron microscopy and transmission electron microscopy and thermal gravimetric analysis. Qualitative analysis of formic acid intermediate was done using HPLC from Perkin Elmer with a packed Aminex column and refractive index detector (RID).The product gas was analyzed by gas chromatograph from Perkin Elmer with a thermal conductivity detector (TCD). 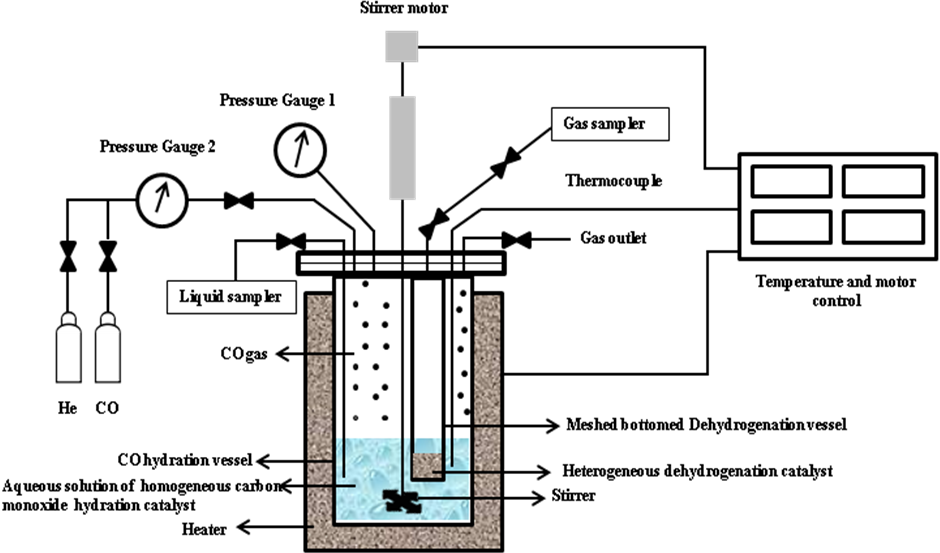 Figure 1- Schematic of the reactor

The gas chromatogram of the product gas showed presence of hydrogen and carbon dioxide only. Concentrations of hydrogen gas over time in 250 µL of product gas sampled intermittently over 5 hours of a reaction run is shown in Figure 2 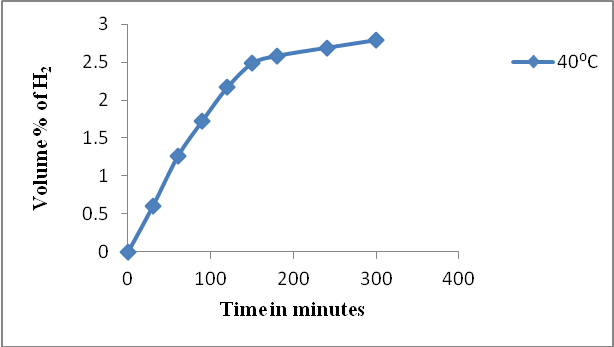 This approach caters to the need of an energy efficient process for carbon monoxide containing exhaust treatment or hydrogen production under milder and easier operating conditions. Through further modifications and scaling, this method also has the potential to turn out as a sustainable means for looping the carbon sequestration and hydrogen storage processes.