The first aftertreatment reactor for diesel engine exhaust is typically the Diesel Oxidation Catalyst (DOC). The primary function of the DOC is the efficient, complete oxidation of engine-out carbon monoxide (CO) and unburned hydrocarbons (HCs). A mixture of Pt and Pd is an effective oxidation catalyst but challenges remain during low temperature operation, which is the trend for emerging emissions regulations. The DOC operates at very high conversion once sufficient temperature has been achieved. However, during the “cold start” most of the hydrocarbons pass through the DOC unreacted and tailpipe emissions may exceed allowable limits. New diesel engines designed to produce less thermal NOx can result in lower exhaust temperatures, compounding the challenge. In addition, some newer drive cycles include periods of low engine load that can lead to the DOC falling below the light-off temperature (quenching) and subsequently higher hydrocarbon emissions.

One approach to solving the low-temperature hydrocarbon emission problem is to incorporate a zeolitic component into the DOC washcoat which serves as a trap of higher molecular weight hydrocarbons emitted at low temperatures below their ignition temperature.  This transient approach stores the hydrocarbons until the exhaust temperature increases to sufficient level to cause their release and light-off. While many commercial DOCs contain a zeolite hydrocarbon trapping component, much of the research has been proprietary. There are relatively few studies in the open literature exploring fundamental issues regarding hydrocarbon trapping and its effect on DOC operation.

In this study we conduct a systematic study of the spatiotemporal behavior of a series of model Pt/Pd/Zeolite DOC catalysts.  The catalysts contain varying precious metal (0 to 120 g/ft3 Pt/Pd) and zeolite-Beta content (0 to 1 g/in3). The objectives are to (i) utilize spatially-resolved mass spectrometry to measure the transient profiles of reacting species, (ii) elucidate the kinetic and transport coupling associated with the multi-component catalysts, and (iii) provide data for model development, and subsequent structured DOC and reactor design and optimization.

A dedicated bench-flow reactor system was developed for this study comprising mixture flow control, the reactor, and combined mass spectrometry and FTIR spectroscopy. Model hydrocarbon adsorption/desorption and light-off temperatures (T50) were examined using a temperature ramp. Experiments to determine steady-state oxidation reaction kinetics were also carried out.  Reaction rates showed negative order dependence as increased reactant concentration reduced the rate of oxidation at steady-state temperatures.  This result is also revealed through light-off temperatures, which are elevated as reactant concentration is increased. Steady-state propene oxidation conversion for the 60 g/ft3 PGM, no zeolite sample are shown in Figure 1.

Spatially resolved mass spectrometry measurements were performed with the use of a quartz capillary inserted along the channel of the monolith (Fig. 2). These local concentration measurements provide essential information about the reaction progression along the catalyst length. At lower temperatures when the reaction is kinetically limited, the negative order dependence on reactant concentration is observed, especially in the front section of the monolith. The reaction rate for the 50 ppm propene reactant feed is faster (more reactant consumed) in the front 1 cm of the monolith channel. When the 50 ppm propene feed is nearly used up, then the higher concentration feeds begin to catch up in terms of total reactant consumed (Figure 3). 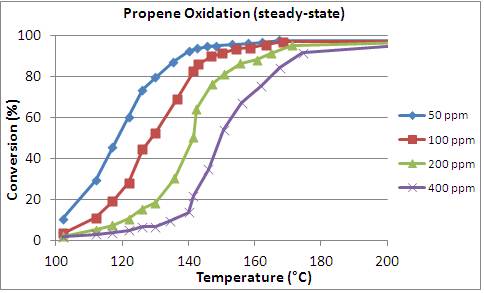 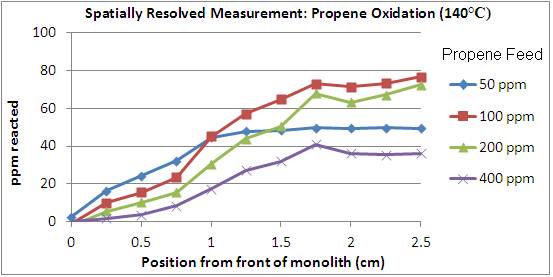