Millions of Americans sustain debilitating or devastating tissue injury or loss secondary to trauma, sepsis, cancer, or congenital defects. In most cases, current prosthetics and reconstructive surgeries fail to provide optimal results in terms of aesthetic or functional outcomes.  For those patients, composite tissue allotransplation (CTA)—encompassing transplantation of hands/limbs, face, abdominal wall, tongue, and larynx—may have the unique potential to restore the appearance, anatomy, and function of the damaged tissue. Although the problem of rejection in CTA is similar to that encountered in solid organ transplantation, CTA involves one of the most immunogenic organs in the body (the skin). For this reason, immunological complications following CTA will be exacerbated. In clinical CTA, the process of rejection is suppressed by systemic delivery of potent immunosuppressants. These drugs are associated with a host of deleterious side effects and, unfortunately, do little to delay the process of chronic rejection. An altertnaive approach to achieve this goal is to harness the innate homeostatic mechanisms intrinsic to the immune system. Physiologically, such a steady state is maintained by suppressive lymphocytes called regulatory T cells (Tregs).  In nature, some cell types utilize a strategy such as this by releasing a chemokine that recruits Tregs. We sought to mimic this strategy synthetically to promote immune hypo-responsiveness at the site of CTA.  Accordingly, our group has recently developed rationally designed controlled release microparticle (MP) systems (referred to as ChemokineMP) capable of reproducing such a Treg-recruiting chemokine gradient in vivo, leading to localization of native Tregs at the site of implantation.  Furthermore, we have developed other formulations (referred to as FactorMP) capable of inducing the differentiation and expansion of Tregs from a patient's own na•ve CD4+ T cells, which are present in considerably greater numbers than peripheral Tregs. Recruited Tregs appear to be capable of inducing local (not systemic) immune hyporesponsiveness and resolution of destructive inflammation.  Our data suggests that local recruitment of Tregs (using our mimetic controlled release chemokine formulations) may even be capable of prolonging rat hind limb CTA in the absence of long term systemic immunosuppression. Thus, we hypothesize that biomimetic, controlled release systems that release key cytokines, immunosuppressive agents, and chemokines can promote long term graft survival in a preclinical CTA model.  ChemokineMP release systems were engineered using a double emulsion-evaporation method as previously described.  A mathematical model of release was used to design the system such that linear release of the protein would mimic the gradient produced by tumors.  Following fabrication and screening, particles were tested in an allogeneic rat hind limb transplant model. Microparticles were injected subcutaneously at the time of transplantation of hind limbs from Brown-Norway to Lewis rats and again on postoperative day 18.  Treatment with ChemokineMP (one dose postoperatively and another on day 18) show enhanced survival rates when compared with blank microparticles (BlankMP) (Figures 1 and 2). Further, it was observed that ChemokineMP treated transplants maintained an intact epidermal layer with low infiltration of inflammatory cells, whereas treatment with BlankMP show a loss of the epidermal layer by postoperative day 25 with significant infiltration of inflammatory mono-nuclear cells. The outcomes of this research have the potential to dramatically impact the field of CTA and reconstructive transplantation by minimizing the need for the number, dosing and duration of systemic immunosuppression with associated long-term toxicity. Finally, these biomimetic therapies will also have broader applications unrelated to CTA such as autoimmune disorders and solid organ transplantation. 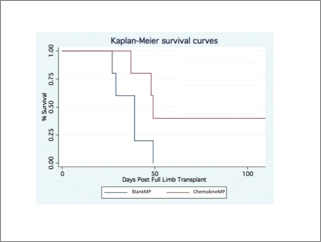 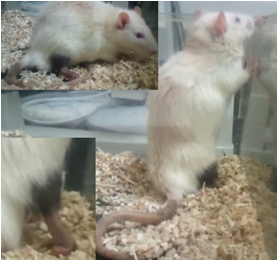