Department of Chemical, Materials and Biomolecular Engineering; University of Connecticut

Though significant advances in have been made regarding the stability of anion exchange membranes in highly alkaline environments, researchers are yet to find a high stability, high conductivity electrolyte for the hydroxide exchange membrane fuel cell (HEMFC).  To limit both chemical and mechanical degradation of commercial and state-of-the-art membranes [1], several groups have begun investigating a new type of anion exchange membrane fuel cell that operates on the carbonate anion cycle.  Utilization of carbonate anions introduces a weaker nucleophile to the electrochemical system that has been shown to significantly reduce membrane degradation rates, Figure 1, though a modest sacrifice in ionic conductivity is also realized compared to hydroxide [2]. 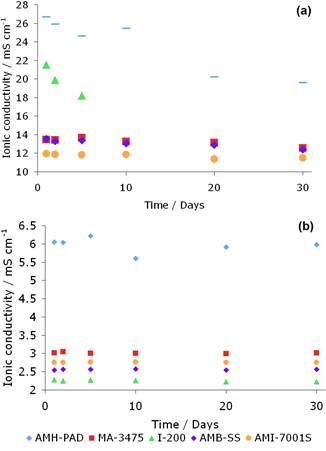 Figure 1 – Improvement in anion exchange membrane stability in the carbonate/bicarbonate form (b) compared to hydroxide (a).

Second, can carbonate anions be produced selectively through the direct electrochemical reduction of O2 and CO2 (Equation 2) under fully humidified conditions?

In this talk, the methodology in the development and performance of the first-known carbonate-selective electrocatalyst [3-4], Ca2Ru2O7, will be discussed.  The performance and selectivity of the catalyst was evaluated in both three electrode voltammetric and fuel cell experiments, while surface chemistry and adsorption of reacting species was evaluated by temperature programmed desorption.  The promises and limitations of this first-generation electrocatalyst will be discussed in detail and candidate materials for next-generation catalysts will be discussed.

Gains in the stability and conductivity of low cost, commercially available anion exchange membranes in carbonate and hydroxide media will be compared.  Stability was evaluated by three primary metrics: ionic conductivity, chemical changes (probed by ATR-FTIR) and mechanical strength.

Each of the gains discussed above will be used to show the promise of carbonate exchange membrane fuel cells as a high stability, high performance alkaline polymer electrolyte fuel cell.