274149 Quantum Yield in a Photo-CREC Reactor for Hydrogen Production

Quantum Yield in a Photo-CREC reactor for Hydrogen Production

Nowadays, photoelectrodes and photocatalysts are being developed for water splitting to produce hydrogen. The goal of this study is to demonstrate the feasibility of water splitting for hydrogen production through a Photo-CREC reactor, using a sacrificial agent and a modified Platinum loaded semiconductor of DP25 (TiO2) [1]  It is also the objective of this study determining optimum Pt loadings, as well as quantum yields [2 and 3]. 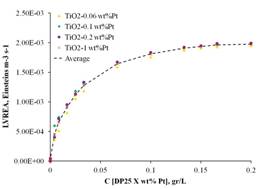 Figure 2. LVREA within the Photo-CREC reactor using a macroscopic balance

Impregnation of Pt on TiO2 leads to enhanced particle size distribution with reduction of particle agglomeration (see Figure 3), with better distribution of charges on the semiconductor. On the other hand, it is shown that Pt did not affect the anatase and rutile phases as well as the specific surface area of the DP25. Figure 4 reports hydrogen production as a function of contact time under free oxygen conditions and pH equals to 4. Runs were developed with excess of Ethanol as OH• scavenger reagent. Hydrogen free of oxygen was produced in all cases with 1wt% Pt on Degussa P25 yielding the best hydrogen production rates. Figure 5 reports quantum yields in a 6-liter Photo-CREC reactor with Ethanol at 2% v/v concentration and different Pt loads on Degussa P25 (see Table 1). It is proven that Ethanol helps averting h+ and e- recombination, with the highest 7.86% quantum yields obtained between 1-6 hours of irradiation. 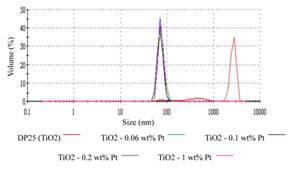 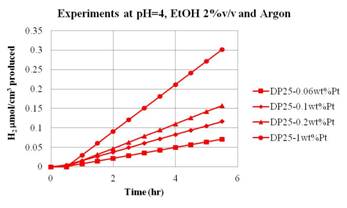 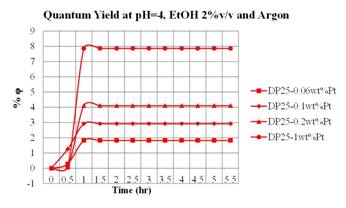