273473 Analysis of Critical Transitions in a Model of Human Endotoxemia

Outcomes from inflammation-linked diseases are determined not only by the severity of injury or the virulence of a pathogen, but also by the body's endogenous inflammatory response. An appropriate inflammatory response leads to healing and recovery, but either too strong or too weak of a response can lead to complications. This is particularly relevant in critically ill patients, whose inflammatory networks are at heightened states of activity as their bodies attempts to recover from their precarious states. A critically ill patient can undergo transitions to different states, for instance representing a return to healthy homeostasis, the development of a concomitant disease, or death, depending on the interactions between their immune response and their illness. Identification and analysis of "tipping points" between states could not only allow for more informed therapy of inflammation-linked diseases, but could also have significant diagnostic and prognostic implications (An, Nieman et al. 2012). Discrete tipping points as a stimulus is gradually increased have been observed in a variety of computational, experimental and clinical environments (An, Nieman et al. 2012). In the context of inflammation, feedforward loops between damage and inflammatory mediators can become activated in response to severe injury, leading to bistability and the potential for abrupt switching between states when a threshold is crossed. Therefore, the identification and analysis of inflammation-driven tipping points is extremely important, particularly if a forthcoming tipping point can be predicted ahead of time to allow for more focused intervention. We approached this issue based on a model of human endotoxemia (Scheff, Mavroudis et al. 2011) to investigate critical transitions within the context of inflammation and study how tipping points emerge; under what conditions the resolution of inflammation and the restoration of homeostasis are possible; how critical transitions between states can be predicted ahead of time; and how circadian homeostatic control systems factor into the transition between states. We evaluated the hypothesis that a gradually changing disturbance provokes a critical transition between steady states of the inflammatory response, and furthermore that this transition can be predicted by stability analysis and that there are underlying circadian patterns in these responses.

Human endotoxemia, an experimental model of systemic inflammation, consists of the administration of low doses of endotoxin (lipopolysaccharides, LPS) to healthy human volunteers. This provokes physiological changes that, in part, mimic those occurring in inflammation-linked diseases such as sepsis and trauma. We previously designed a mathematical model of human endotoxemia (Scheff, Mavroudis et al. 2011) which incorporates a feedforward loop in the inflammatory response that leads to bistability, with one steady state representing healthy homeostasis with low levels of inflammatory mediators, and the other steady state exhibiting heightened levels of inflammatory mediators that persist even when LPS is removed. In this work, we studied the response to chronic LPS exposure, mimicking a slowly growing bacterial infection. Under these conditions, the system initially remains in an intermediate transition state, where state variables are very gradually evolving, until there is an abrupt change and the heightened inflammatory state is reached. To assess the stability of this model as a function of time, the Jacobian matrix was numerically estimated. Given the eigenvalues of a linearizable system, it is possible to determine its stability, has been used an indicator of an impending transition in ecological models (Lade and Gross 2012). All simulations were performed multiple times throughout the day to evaluate the impact of circadian rhythms on the system.

We identified that, after the system becomes unstable, there is a delay before the trajectory begins to significantly move towards the heightened inflammatory state, as shown in Figure 1. This represents a critical time window where identification of an impeding state transition is possible, but intervention still allows the system to return to homeostasis. Additionally, there are circadian dependences on both the time of onset of this time window as well as its size, illustrating how homeostatic control systems can play a role in the response to stress. These results indicate how critical information about a system, information which may be of significant translational value, can be buried within the dynamic behavior of that system. 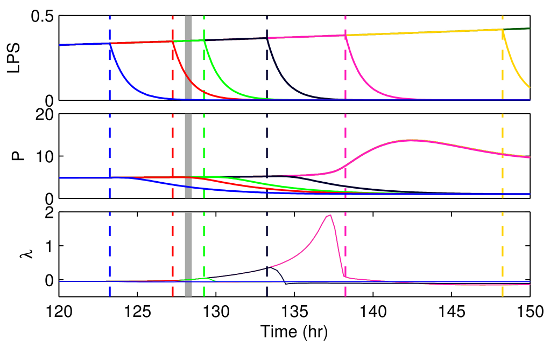 Figure 1: LPS exposure is initiated at t=0hr. The three panels respectively show two different model variables (LPS and P, pro-inflammatory signaling) and the largest eigenvalue of the Jacobian (λ) as functions of time. Each thin solid curve represents a separate simulation, each with identical beginnings, but with LPS removed at different time points, denoted by the vertical dashed lines. The thick vertical grey bars mark the time at which the maximum eigenvalue of the Jacobian matrix became positive, signaling the impending transition between steady states.

This type of analysis is a first step towards identifying how the dynamical components of the inflammatory network can be leveraged to predict forthcoming tipping points as well as to more broadly understand system stability properties. As progress is made towards addressing the issues raised here, we will grow ever-closer to the ideal of building personalizable models based on clinically available biomarkers. A model calibrated on an individual patient could provide a personalized trajectory that could be analyzed for its stability, allowing for more focused care when a critical transition is imminent.