272829 Grafted Polymeric Nanoscale Hydrogels for the Oral Delivery of Chemotherapeutics

Grafted Polymeric Nanoscale Hydrogels for the Oral Delivery of Chemotherapeutics

Materials and Methods: Synthesis of the nanoparticles was achieved using an emulsion polymerization technique by combining methacrylic acid, tert-butyl methacrylate, poly(ethylene glycol methyl ether methacrylate) (PEGMMA; MW ~2080g/mol), tetraethylene glycol dimethacrylate (TEGDMA), 4-(2-hydroxyethoxy)phenyl-(2-hydroxy-2-propyl)ketone (Irgacure 2959) and water into a small round bottom flask, followed by probe sonication, nitrogen purging and UV-initiated free radical polymerization for 2.5 h. The resulting nanoparticles were dialyzed and lyophilized. Doxorubicin, an intravenously administered drug for a wide range of cancers, was chosen to be a model hydrophobic chemotherapeutic to evaluate the loading and release capabilities of these nanoparticles.

Results: A set of polymers with varying cross-linking density and core hydrophobicity was synthesized. Nanoparticles demonstrated reversible, pH-responsive swelling with a swollen diameter in the range of 105-125 nm at pH 7.4. In addition, SEM imaging (Figure 1A &1C) was also used to determine the dry diameters of the particles which were in the range of 50-70nm. As the crosslinking density of the nanoparticles was increased, their ability to swell decreased (Figure 1B). 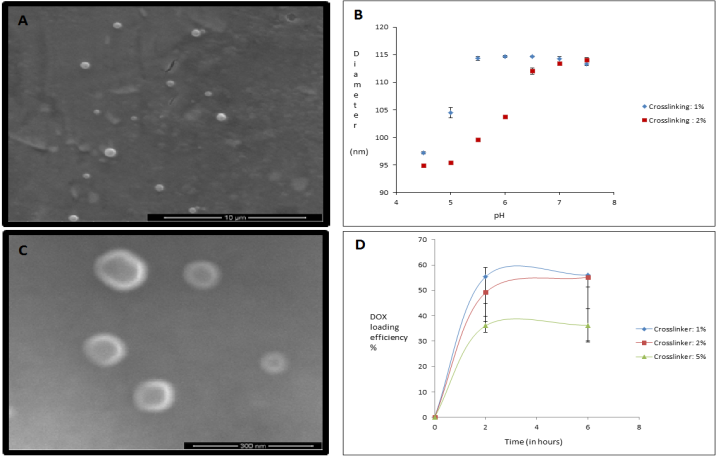 Conclusions: Our findings suggest that the P(MAA-co-tBMA-g-PEG) nanoscale hydrogels are suitable candidates as carriers that prevent release of chemotherapeutics at the low pH of the stomach during transit in the gastrointestinal tract, while still being able to preferentially load hydrophobic chemotherapeutics. Ongoing and future studies include determining the cytotoxicity of these nanoscale hydrogels against Caco-2 cell lines in addition to evaluating their mucoadhesion capacity.

Acknowledgement: This work was supported by the NIH/NCI Center for Oncophysics (CTO PSOC U54-CA-143837).