The formation of a suitable extracellular matrix (ECM) within a vascular graft is critical for graft survival post implantation over an extended period of time. Herein, we have utilized polyethylene glycol (PEG) based hydrogels in combination with a bio-inspired peptide towards developing a suitable material capable of promoting increased vascular ECM deposition. Three-dimensional (3D) hydrogel templates were engineered using a combination of PEG-DA, an elastin mimetic peptide, EM-23, and an enzymatically cleavable peptide for promoting mature vascular ECM production in the presence of smooth muscle cells (SMCs). The elastin mimetic peptide, EM-23 (AAKAAKVGVAPGRGDSAAKAAKK), was engineered to contain containing the hexapeptide sequence, VGVAPG, and the RGDS sequence which binds to the surface bound receptor elastin binding protein (EBP) and cell surface integrins, respectively. Also, a degradable sequence, (DS; AAAAAAAAAK), was also engineered to allow for ECM growth and remodeling within the hydrogel. Different hydrogels comprising of varying amounts of PEG-DA, EM-23, and DS were polymerized in the presence of SMCs and the amount of elastin deposition was quantified over a period of three weeks. Our results show that hydrogels comprised entirely of EM-23 were able to promote significant amounts of elastin over all the other hydrogel combinations after 7 and 21 days (Figure 1). Furthermore, after 21 days, a ten-fold increase in elastin production was observed within EM-23 hydrogels in comparison with previously reported values where elastin deposition was quantified within hydrogels comprised entirely of PEG-DA and RGDS1. The higher amounts of elastin production over a period of three weeks from EM-23 hydrogels indicate that this peptide contains all the beneficiaries of a suitable biomaterial capable of providing a 3D template for increased ECM deposition and can therefore be easily exploited to engineer compliant vascular grafts. 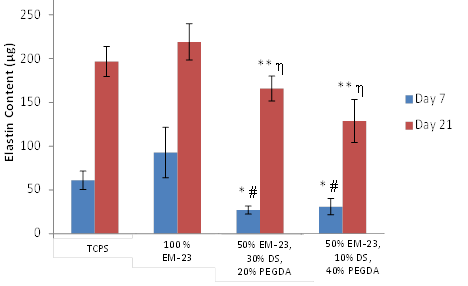