Through computer aided modeling, emergent phenomenon may be elucidated—how the interaction of a billion simple answers (forged through reductionist approaches) create a cohesive cellular/organismal response can be understood.  A first step, of course, is to investigate the isolated interaction of two simple answers.  Here, we investigate phenomenon arising from the overlap of quorum sensing (QS) and cell motion.

QS is a concentration dependent phenomenon used by bacteria to sense local diffusion conditions or local cell concentration.  Among the few known and first identified QS agents are the autoinducers (AI) AI-1 and AI-2.  AI-1 is an umbrella term for species specific AHL's secreted from Vibrio bacteria which, after achieving a sufficient concentration, trigger a positive feedback mechanism.  AI-2 is much more broadly distributed QS agent working either through LuxPQ, a two component regulatory system, or the more elaborate LuxS-regulated (Lsr) system that recompartmentalizes AI-2 to achieve quorum activation.  Because these QS agents are small molecules, the effective concentration that the cells are exposed to is highly dependent upon local convection and diffusion dynamics, which are influenced—especially stochastically—by cell transport (motility).  Here, we predict nontrivial phenomenon arising from the confluence of these transports (QS agent and cell) based on in silico experimental results.

Cells were treated as autonomous single agents that either swam or glided within a finite element environment through which AI-2 diffused.  At each time point, effective QS agent concentration was integrated across local grids, QS state (whether the genes were switched on) was evaluated, QS agent exchange between the cell and the media took place, cells divided and moved stochastically, and QS agent diffused between grids.

Firstly, we successfully recapitulated the supernova-like activity pattern of a surface attached growing colony under the influence of AI-1 QS.  Next, we used an ODE model of AI-2 activity to inform the stochastics governing Lsr behavior.  Applying the forms of the ODEs to colony growth in our finite element/single agent scheme resulted in a stable, abrupt checkered activation.  We extended this particular model by adding AI-2 synthase (LuxS) controlled by the lsr promoter, and predict that the proportion of QS+ cells is enhanced depending on the plasmid copy number and where in parameter space the system operates.  Lastly, we modeled the overlap of Lsr based QS dynamics with swimming cells that chemotax according to AI-2 gradient.  In these simulations, AI-2 and cell transport were limited by virtual boundaries.  Over the course of the experiment, cells/AI-2 coalesced in random clusters along these boundaries, especially in the corners, trapped by a positive feedback loop.  This behavior persisted until QS activation, at which point the driver of chemotaxis was swept up and bacteria within these clusters redispersed. 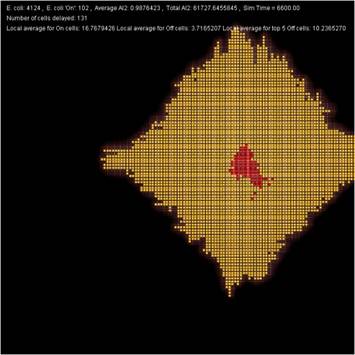 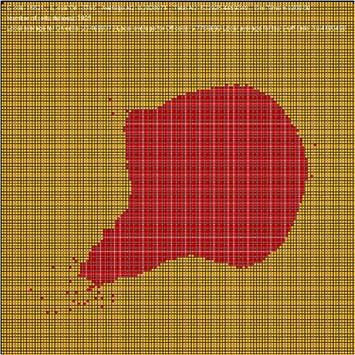 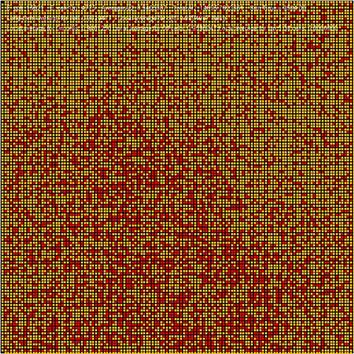 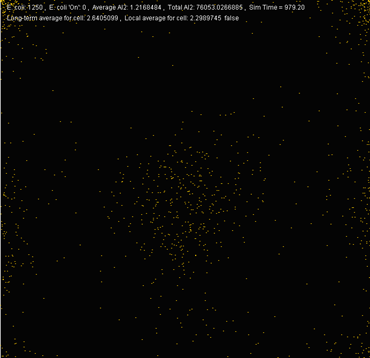