Statement of Purpose: A set of peptides from a phage display library has recently been found to bind specifically to adult human blood outgrowth endothelial cells (BOEC) but not HUVEC. We previously incorporated these peptides into terpolymer methacrylate films, obtaining materials that selectively adhered BOEC[1]. However, these polymers lost selectivity in the presence of serum proteins. In order to prepare improved functional biomaterials for in vivo applications, we have synthesized a new generation of polymers that incorporate succinimide acryl-PEG tethers. Candidate peptides, such as "TPS" and "GHM" (Table 1), have been incorporated into polymers as well as the non-fouling poly ethylene glycol (PEG) motif. Such templates are being studied for their affinity for Endothelial Progenitor Cells (EPC) with and without shear stress.

Methods: Nonfouling terpolymer is produced by free radical polymerization of methacrylate monomers, methacrylated PEG, and a succinimide- or maleimide- methacrylate. EPCs are either procured from adult human peripheral blood (HBOECs) or directly purchased from Lonza (ECFCs).

EPCs and Human Umbilical Vein Endothelial cells (HUVECs) are cultured on the polymer to assess adhesion and growth responses to the peptides. Adhesion is measured by DNA assay and actin staining for static culture experiments. In dynamic experiments, cell adhesion was carried out in a radial flow chamber allowing real time quantification of cell adhesion as a function of shear rate. The radial flow chamber was mounted on a Nikon inverted microscope, and ImagePro software was used to automatically select observation fields and count cell number[2].

Results: Phage display peptides have been synthesized and incorporated into the methacrylate terpolymer in addition to a positive control, RGD, and a negative control, RGE. Preliminary data demonstrate selective Adult BOEC adhesion from 10% serum to a scaffold linked with the promising peptides, especially GHM (Figure 1b). HUVEC and Lonza ECFC show very low adhesion to surfaces except RGD and TCPS.

A comparison of HUVEC, Adult BOEC and Lonza ECFC attachment at 10 minutes on RGD linked films under flow is shown in Figure 2. For all three cell types, the number of adhered cells increased as the flow rate decreased. The degree of Lonza ECFCs adhesion was much higher than that of HUVECs over the entire shear rate range examined. The cell density of HBOECs was similar with that of Lonza ECFCs when the shear rate is low. At high shear rates, adult BOECs are less adhesive compared with cord blood cells but still more adhesive than HUVECs.

Conclusions: . A novel methacrylate polymer has been synthesized with both a PEG component to minimize protein adhesion and nonspecific cell binding as well as a peptide binding component. Cast films of this polymer incorporating the GHM peptide significantly increased the contact adhesion of Adult BOEC in the presence of serum proteins.

The highly proliferative EPCs[3] also have higher adhesion propensity than mature EC under flow and thus may have the potential to contribute to endothelialization of a device. Ongoing work aims to demonstrate selective EPC affinity for electrospun peptide containing scaffolds under flow conditions. This would permit rapid EPC expansion directly from blood samples and support vascular graft endothelialization. 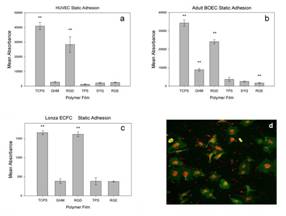 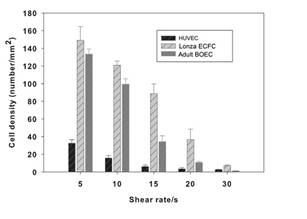 Extended Abstract: File Not Uploaded
See more of this Session: Surface Modification and Characterization of Biomaterials
See more of this Group/Topical: Materials Engineering and Sciences Division