Introduction: The mechanical properties of microtubules are important in enabling its various cellular functions during division, migration and intracellular transport. Microtubules under thermal forces have a persistence length on the order of millimeters yet in vivo microtubules exhibit bends on micron length scales. This suggests that within a living cell, microtubules are exposed to large non-thermal forces. We show with femtosecond laser ablation that microtubules are under tension due to pulling forces generated by dynein motors1. These pulling forces focus bends in microtubules to the periphery and also center the centrosome. We also answer the question: can microtubule motors cause fluctuations in the trajectories of the tips of growing microtubules?

Results and Discussions: On severing a single microtubule in a living cell using femtosecond laser ablation, we found that the minus-ended microtubule increased in bending in a dynein-dependent manner suggesting that the microtubule is under tension (not compression) along its length due to dynein motor activity(Figure 1 A). Experimental results on single microtubule severing and centrosome centering by dynein pulling forces could be explained with a computational model. We also found that microtubule growth trajectories in control cells spread out considerably at early times compared to trajectories in dynein-inhibited cells (Figure 1 B). Dynein activity thus contributes significantly to the bending of growing microtubules. We have also performed preliminary experiments on understanding the role of kinesin and myosin II in bending growing microtubule tips. 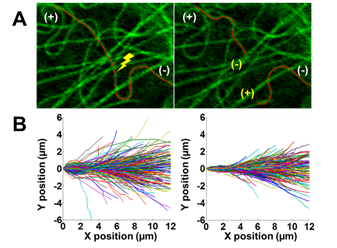 Figure 1. (A) Images highlighting changes in shape after laser-based severing of a single microtubule in a living cell. The newly generated minus end microtubule increases in bending after laser severing. The position of the cut is indicated by the flash and the severed microtubule is highlighted in red. New plus and minus ends created upon severing are indicated by the yellow symbols; the white symbols indicate the ends of the original microtubule3. (B) Trajectories of growing microtubules were reconstructed using plusTipTracker. The plots show that fluctuations in growing microtubules are smaller in dynein-inhibited cells (right) compared to control cells (left).

Conclusions: Dynein pulls along the length of microtubules in living cells and also frictionally resists any lateral motion. Compared to these forces, compressive stresses in the microtubule are negligible (except very close to the periphery). In the absence of dynein, microtubules grow straight while in the presence of dynein, there is significant variance in the growth trajectories. Collectively, our results shed new light on microtubule mechanics in living cells.