Pluripotent stem cells (PSC) hold promise for cell replacement therapy, but efficient differentiation to desired cell types remains a major obstacle.  Although most PSC research is performed in high, non-physiological O2 environments, cells during embryonic development are actually exposed to much lower O2. Here we report that variation of O2 in a controlled manner markedly enhances multi-stage differentiation of embryonic stem cells to insulin producing cells. We differentiated CyT49 human embryonic stem cells (hESC), using a modification of the 5-stage protocol published by ViaCyte, Inc (D'Amour et al., Nat Biotech 2006, Kroon et al., Nat Biotech 2008) under different sequences of well-characterized pO2 environments. We controlled cellular oxygen exposure through adhesion culture on highly O2-permeable silicone rubber membranes so that the cells in contact with the membrane were exposed to the same pO2 as in the gas phase.

Our strategy in selecting O2 patterns to investigate was based on two hypotheses: (1) cells in the developing embryo are initially exposed to low O2 levels that increase as the tissues become vascularized. (2) The effects of low O2 on the early stages of differentiation can be manifested in later stages of differentiation.  At each stage there were two steps.  We started with stage 1at six different O2 levels (1%, 3%, 5%, 8%, 10%, & 20%). Samples at the end of stage 1 were analyzed with qPCR and flow cytometry for markers of definitive endoderm (DE).  In the second step, we carried the differentiation to completion. The one to three best oxygen levels that produced the highest fraction of DE cells were then used in stage 1, and the remaining stages were carried out at 20% O2. Each set of complete differentiation experiments employed a control condition of constant 20% O2 for comparison.  The best stage 1 O2 level was selected on the basis of the fraction c-peptide+ and/or insulin+ cells in the stage 5 preparation as well as the extent of gene expression of relevant pancreatic endoderm (PE) and beta cell markers, and this O2 level was used for all subsequent experiments.  This two-step process was repeated sequentially with stage 2, 3, and 4; the condition for stage 5 was fixed at 20% O2.   Beginning with stage 3 an additional O2 condition of 40% was added to the conditions tested.  All together, 12 different sequences of O2 levels in successive stages were evaluated.

The fraction of cells containing insulin or c-peptide was similar. Results for 9 of the 12 sequences are summarized in Table 1 in terms of the pooled mean of the fractions of c-peptide+ and insulin+ cells. 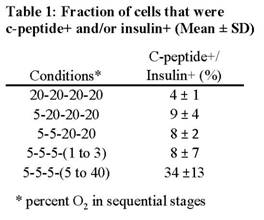 With normoxic conditions in all of the stages (designated 20-20-20-20), the fraction was about 4%.  Reduction of O2 to 5% in stage 1caused the fraction to double.  A similar additional reduction of O2 in stage 2 had no further effect.  The effect of another sequential reduction to 5% in stage 3 depended on the oxygen level in stage 4.  If O2 was further reduced below 5% in stage 4, there was no change.  However, in the range of 5 to 40% O2 for stage 4, the fraction of c-peptide+/insulin+ cells jumped by a factor of four to a mean of 34%.  At two conditions, the fraction was about 50%, but there was not a monotonic trend with O2 level.

These results demonstrated that modulation of the O2 level to which cells are exposed can have a pronounced effect on the outcome of directed differentiation protocols.  In the present example, culture at reduced oxygen for the first three stages, followed by an increase in O2 levels for the last two stages, produced an eight-fold increase in the fraction of c-peptide+/insulin+ cells.