Gas-fluidized beds of particles are widely used in industries to carry out catalytic and non-catalytic reactions, drying, and granulation. In many applications, liquid is injected at some locations within the bed, creating a system of wet particles with a potential to agglomerate. In the event that particles agglomerate, liquid is transferred from particle surfaces into capillary bridges.

Many questions remain unanswered regarding the fundamental behavior of liquid spreading in wet fluidized beds, including the steady state liquid distribution and how this distribution changes with cohesive force. To begin answering these questions, we consider a small (on the order of 1 cm3 three dimensional periodic domain in which discretely represented solid particles are coated in a thin film of liquid and fluidized by a continuous gas phase. We perform a time-driven Discrete Element Method based simulation (coupled with the average equation of motion for the gas), and consider liquid transfer1depletion of liquid on the surface of particles into pendular bridges, and the viscous and capillary forces between individual particles2,3,4.

Figure 1 shows the structure of agglomerates in a wet system (a) compared to the clustering of a dry system (b). The domain-averaged slip velocity for the wet system is approximately 70% that of the dry system. Initially all particles are assigned a random position and identical liquid contents. However, after some time, particles reach a statistical steady state in which nearly half of the liquid is on the particles and half is in bridges. The standard deviation of liquid content on the particles is 10% of the initial liquid present on a particle while the standard deviation of liquid content in bridges is 3% of the initial liquid present on a particle. We perform a sensitivity analysis with respect to the initial configuration of the particles before they are wetted and provide statistics on domain-averaged slip velocities, liquid distribution, and filtered quantities for domain-averaged volume fractions ranging from 0.05 to 0.40. Analysis of data gathered from these simulations provides quantitative insight into liquid spreading and fluidization of agglomerates within wet fluidized beds. 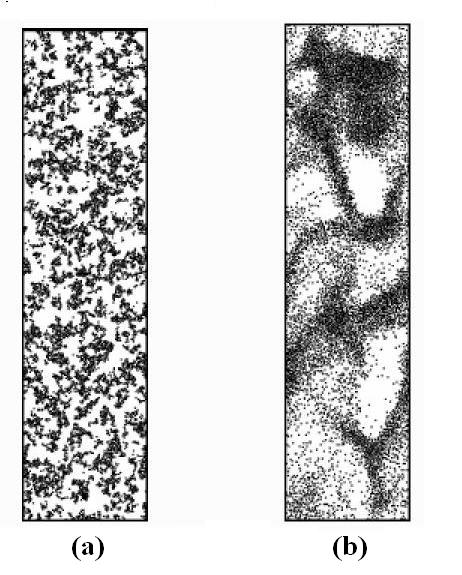 Figure 1: Cross sectional view of particle positions in the 3D domain. (a) the wet system and (b) the corresponding dry system. The system is 2 cm3, with 256,600 particles. The domain-averaged solid volume fraction is 0.2 and the liquid content in the system is 0.25 % of the solid particle mass.