270744 Design and Characterization of a Continuous Stirred Tank Crystallizer

Design and Characterisation of a Continuous Stirred Tank Crystallizer

This study presents the development of a continuous crystallization platform consisting of a single stirred tank Mixed Suspension Mixed Product Removal (MSMPR) crystallizer. A photo and schematic drawing of the MSMPR setup appear in Figures 1 and 2 respectively. A recirculation loop is incorporated such that the withdrawn product is recycled to a dissolution vessel which serves as the feed tank to the crystallizer. Two OptiMaxTM workstations (Mettler-Toledo) are used as both the feed/dissolution tank and the MSMPR crystallizer. Difficulties can often arise in the continuous removal of representative, non-classified product from lab-scale MSMPRs as a result of the relatively low volumes involved and consequently slow flowrates and removal velocities observed [1]. Intermittent withdrawal, whereby a certain percentage volume of the MSMPR is periodically removed at a high velocity so as to aid the potential for iso-kinetic removal and mitigate classification has been applied previously and is adopted in this work [2, 3]. This quasi-continuous transfer of the MSMPR product to the feed/dissolution vessel is achieved using vacuum with 7.1% of the suspension volume removed per transfer. 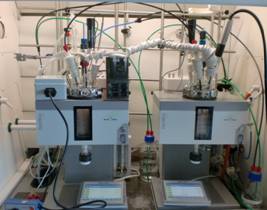 Figure 1: Image of the MSMPR setup showing feed/dissolution vessel on the left and MSMPR on the right with FBRM in-situ 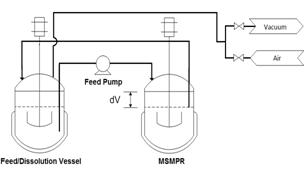 Figure 2: Schematic drawing of the MSMPR setup showing application of vacuum in recycling material from MSMPR to feed/dissolution vessel

Characterization with FBRM and Periodic Sampling

The crystallization is monitored in-situ using FBRM and PVM. This allows real time tracking of the changes in the particle size distribution and attainment of steady-state. Figure 3 shows the dynamic response in the FBRM total counts and mean chord length trends for a high-magma density crystallization proceeding to steady-state.

Figure 3: Tracking MSMPR to steady-state with FBRM for a high magma density run of 60 minute residence time. Showing regions: (A) wash-out period, (B) nucleation response and (C) attainment of steady-state

As the crystallization proceeds initially there is a wash-out period (A) where particles are withdrawn in the absence of nucleation as the supersaturation builds. Over this period crystal growth is observed which is confirmed by an increase in the FBRM size trends and in-situ PVM images (Figure 5). Supersaturation increases to a maximum just before region (B), where the kinetics of the system force a period of constant nucleation which steadily consumes some of the supersaturation and slightly shifts the CSD back towards the fine end. Eventually the rate at which new crystals are formed by nucleation balances the rate at which they are withdrawn from the MSMPR and the system tends towards a steady-state (C).

Figure 5: In-situ PVM images from a low magma density run of 15 minute residence time showing the change in particle size during MSMPR start-up. Taken at: (A) time zero after batch cooling at 1.5oC/min, (B) at 1 residence time, (C) at 2 residence times and (D) at 3 residence times

Influence of Start-Up Mode on Attainment of Steady-State

Several start-up regimes for running an MSMPR could potentially be employed. To examine whether particular choices in this area can have a significant bearing on the steady-state particle size obtained by the system, three methods of starting the MSMPR were investigated whilst keeping all other conditions the same:

(i) Batch cooling the saturated feed to the desired MSMPR operating temperature, therefore allowing continuous operation to be started with an equilibrium suspension in the MSMPR at time zero

(iii) Seeding a solution that is saturated at the MSMPR operating temperature with isolated steady-state product from a previous run, therefore creating a suspension of the final product at time zero

All start-up methodologies were assessed through high magma density benzoic acid crystallizations, where the feed to the MSMPR is saturated at 40oC and the crystallizer is operated at 18oC. The resulting steady-state chord length distributions from each start-up regime are seen to be similar in all cases (Figure 10). This suggests that the final steady-state condition attained by the system is largely unaffected by the start-up methodology adopted.

Comparison of the FBRM total counts trends during the dynamic route to steady-state suggests that starting with saturated solution that is seeded with final product material may offer the quickest route to steady-state (Figure 11). Unlike the equilibrium batch start-up, in this case the initial particle size distribution is the same as the final and as a result the system does not require periods of significant oscillation in the size distribution to develop the steady-state CSD for the continuous process. This therefore may represent an optimum start-up strategy for MSMPRs, as the time required to reach steady-state is reduced and hence wastage of material whilst the final product is potentially out of spec is minimised.

Figure 11: Comparison of the dynamic response in the FBRM total counts trends as the system proceeds to steady-state for all three start-up methodologies investigated