The selective catalytic reduction of NOx by hydrocarbons remains one of promising technologies for removing NOx under lean conditions, even though its overall deNOx performance is not yet sufficient for viable commercial implementation, especially due to its poor low-temperature performance. 1,2  Recently, the use of oxygenated hydrocarbon as a reductant (OHC-SCR) has been reported as an alternative way to improve the low-temperature deNOx activity of the HC-SCR.3,4  However, its deNOx activity in the low temperature region below 300 oC is still too low to be commercially applicable to the after-treatment of diesel engine exhausts.  Another way to enhance the low-temperature deNOx performance may be the addition of H2 to the feed stream over the Ag/Al2O3 catalyst.5,6

In the present study, we report a strong autocatalytic synergism between the conventional HC-SCR and the NH3-SCR observed during the reduction of NO by a bifunctional reductant over a Ag/Al2O3 catalyst, which has resulted in a dramatic increase of the deNOx performance compared to that by a corresponding unifunctional reductant.  To demonstrate the synergistic interaction between the HC-SCR and the NH3-SCR, we have chosen monoethanolamine (MEA) as a representative bifunctional reductant, because it contains both partially oxidized hydrocarbon with a hydroxyl group (–OH) for the OHC-SCR and an amino group (–NH2) as the precursor of NH3 for the NH3-SCR.  MEA is one of the bulk commodity chemicals widely used in industry as a gas-scrubbing agent for absorption and removal of CO2 and H2S from refinery and natural gas streams.7  Plausible reaction pathways have been proposed to elucidate the enhanced deNOx activity of Ag/Al2O3 by MEA, based on comparative catalytic activity tests and the catalyst surface analysis by an in situ FTIR.

A series of separate experiments has confirmed that NH3 can be produced during MEA oxidation, which can be subsequently oxidized to N2 and NO over the Ag/Al2O3 above 300 oC and 350 oC, respectively.  In addition, hydrogen is produced from MEA decomposition or steam reforming in the absence or presence of oxygen and water, respectively, from 200 to 500 oC.  These findings indicate that the deNOx activity of the Ag/Al2O3 catalyst is initiated with the production of hydrogen and NH3 from MEA, triggering the autocatalytic NH3-SCR reaction in addition to the conventional HC-SCR reaction over the Ag/Al2O3 catalyst.

Possible reaction intermediates during the MEA-SCR reaction were investigated by in situ FTIR as shown in Fig. 2.  A band at 1670 cm-1 when MEA was employed with or without NO can be attributed to the formation of oxime on the surface of the Ag/Al2O3 catalyst.11  Oxime has been reported to be a precursor to active reaction intermediates for the reduction of NO to N2.12,13  Both intra- and inter-molecular formation of oxime from MEA may be possible due to the strong intra- and inter-molecular H-bonding between the –OH and –NH2 groups in MEA.9,10  Another peak assigned to the isocyanate species at 2235 cm-1, widely recognized as a key reaction intermediate to convert NO to N2 by the HC-SCR reaction, was observed at 200 oC when MEA was used as the reductant with or without NO in the feed.  It reveals that the formation of both oxime and isocyanate species is mainly due to MEA in the present catalytic deNOx system.  When (ethanol + ammonia) was used as the reductant, a weak peak for the formation of the isocyanate species also appeared at 200 oC with or without NO, consistent with its weak synergy compared to that of MEA, as shown in Fig. 1.  However, with ethanol as the reductant, the isocyanate species was hardly formed at 200 oC, even when NO was present in the feed.  These findings indicate that the deNOx activity is enhanced by the reaction of NO with the reaction intermediates such as oxime and isocyanate species at low temperatures over the Ag(3.8)/Al2O3 catalyst.

Based on all the observations, possible reaction pathways for the MEA-SCR reaction over Ag/Al2O3 are proposed as shown in scheme 1.  Starting from the nominal reductant MEA for simplicity, scheme 1 shows that MEA can produce highly reactive reductants such as H2, NH3 and –NCO species in two parallel reaction pathways.  Note that both NH3-SCR and HC-SCR can proceed simultaneously on the surface of Ag/Al2O3 catalyst due to the production of highly reactive reductants by the reaction of MEA with other reactants.

In summary, a bifunctional reductant (MEA) is capable of transforming the normally single-functional Ag/Al2O3 catalyst active only for HC-SCR into a dual-functional catalyst active for both HC-SCR and NH3-SCR, resulting in a dramatic enhancement of its deNOx activity through an autocatalytic synergism. 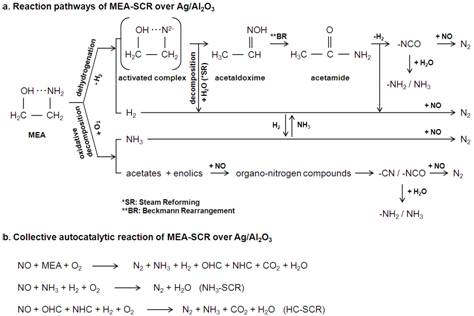