In flue gas, trace metals exist primarily in three forms, element metals, oxidized metals, and particle-associated metals, which can be removed by different methods from flue gas due to their different properties. For example, most of oxidized metals are water-soluble and can be removed by wet flue gas desulfurization (Wet-FGD). Since the content of atmospheric TM in flue gas is typically very low (smaller than 10 µg/m3), it is challenging to accurately identify different forms of TM emissions. Therefore, an accurate and reliable analytical method is highly desired for measuring and controlling different forms of TM emissions from coal-fired power plants.

The objective this study is to develop a method for the identification of different forms of TM emissions from coal-fired power plants. A new method has been developed to determine different forms TM emissions including Hg, Pb, Mn, and Cd in the flue gas based on EPA method-29 and Ontario Hydro Method, which are recommended by the United States (US) Environmental Protection Agency (EPA) to determinate of TM emissions. For the new method (as shown in Figure 1), particle-bound TM are collected in the front half of the sampling train. Eight ice-bath-chilled impingers are connected in a series with leak-free ground glass fittings for collecting gaseous emissions. Because oxidized metals such as Hg2+, Mn2+ and Cd2+ are water-soluble, the first three impingers (starting from the left) all contain 100 ml of KCl solutionfor absorbing and retaining oxidized-state metals in the gaseous phase. The fourth and fifth impingers, which contain 100 ml of 5%(v/v) HNO3/10%(v/v) H2O2, absorbs and retains elemental state of TM in the gaseous phase. The sixth and seventh impingers contain 100 ml of 4%(v/v) KMnO4/10%(v/v) H2SO4 for element Hg capture. The eighth impinger contains 200-300 g of dried and pre-weighed silica gel and is used to determine the moisture gain and to prevent moisture condensation in the pump and the metering device. Samples are recovered, digested, and finally analyzed for TM using hydride generation inductively coupled plasma atom emission spectrometry (HG-ICP-AES) or inductively coupled plasma mass spectrometry (ICP-MS). 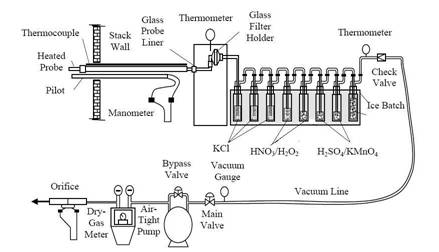 Three methods, i.e., OHM, M-29, and our proposed new method, were used to measure different forms of TM emissions from a 300 MW power plant in China. The consistence and reproducibility of raw data from three methods has been investigated, and the results clearly show that our method can accurately, reliably and reproducibly measure the different forms TMs in flue gas.