Background: The efficacy of anticancer therapy is often offset by serious side effects. This is largely due to toxicity of the chemotherapy drug and its undesirable uptake in vivo. Various attempts have been made to retain the anticancer effect while reducing toxicities, including continuous infusion and liposomal delivery of chemotherapy drugs. Since the outcome of an anticancer therapy depends strongly on the pharmacokinetics of the drug as well as the properties of tumour and its surrounding tissue, rational criteria for choosing an optimal delivery mode and dose for different types of tumours are not yet available.

Methods: In this study, a computational model is developed which incorporates real tumour geometry reconstructed from magnetic resonance (MR) images, and the key physical and biochemical processes involved. These include time-dependent plasma clearance, drug transport through the blood and lymphatic vessels, extracellular drug transport (convection and diffusion), binding with proteins, lymphatic drainage, interactions with the surrounding normal tissue and drug uptake by tumour cells. Anticancer efficacy is evaluated based on the faction of survival tumour cells by directly solving the pharmacodynamics equation using the predicted intracellular doxorubicin concentration. Comparisons are made of the predicted efficacies of different modes of drug administration and doses in a clinical relevant range. As a typical anti-tumour drug, doxorubicin is employed in the computational model. 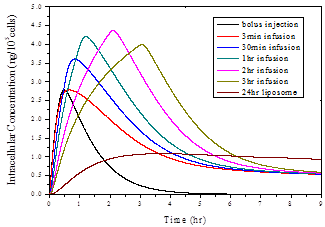 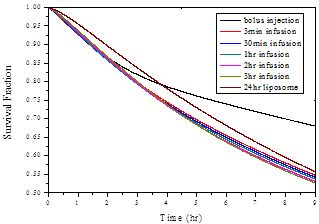