An important unit operation in the pharmaceutical industry is the coating of tablets. A common technique is drum coating, where the tablets are placed in a rotating drum and a coating liquid is sprayed onto the moving tablets. For most applications, the uniformity of coating is of great importance. This includes the even distribution of coating on single tablets, and the uniformity of coating mass between the different tablets of a batch . The demand for process understanding shows in the increasing number of investigations in recent years, both experimentally[1] and using the Discrete Element Method (DEM)[2-4].

The aim of this work is to improve the inter-tablet uniformity of a given coating process, and to predict the scale-up behaviour. To this end, exhaustive investigations based on DEM simulations are performed. Methods established in literature were applied, and new models developed. For the simulations, the real geometry of the apparatus was used. The material properties came from measurements, the operational parameters were taken from a real coating process. To capture the spray itself, two methods for the modelling of a spray in DEM simulations were implemented (Fig. 1): : a user module for the DEM software that models the spray as droplets (Fig. 1), and a ray-traced algorithm that operates on the output data of a prior DEM simulation. 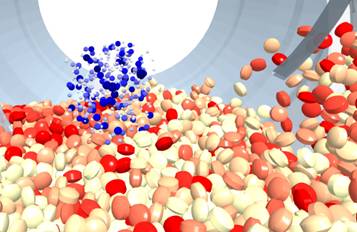 The basis for the investigation is a full factorial 23 Design of Experiments for the lab-scale coater (BFC5, L.B. Bohle, Ennigerloh, Germany). The two spray models were applied to extract detailed information on the spray process, such as coating mass distribution or Single Visit Residence Time. First, a statistical analysis of how the DoE parameters affect the product quality was done. Second, the influence of the spray setup was studied in detail. This includes the geometry of the spray zone, the number of nozzles, and the placement of them. Finally, similar investigations were done for the pilot-scale to determine the scale-up performance.

The results of the DEM simulation give a deep understanding of a realistic coating process from different angles. They point out the main influence factors, and show feasible ways to improve the coating uniformity.