Solid-polymer-electrolyte (SPE) reactors, with structures that are similar to those of proton-exchange-membrane fuel cells, have been used in several recent studies to perform chemoselective hydrogenations of multifunctional organics [1-3].  These reactions produce a number of value-added fine chemicals [4]. SPE reactors can achieve superior selectivities to the desired products compared to conventional thermocatalytic reactors [3,5]. In addition, they allow the reactions to be carried out at moderate temperatures and pressures. Furthermore, mass transport limitations for hydrogen can be significantly reduced via the use of proton-exchange membrane in these reactors. These advantages have made SPE reactors promising for the synthesis of fine chemicals.

There are limited reports in the literature of hydrogenation reactions performed in SPE reactors. This talk will examine the use of crotonaldehyde (CH3-CH=CH-CHO) as a probe molecule to study the selective hydrogenation of alpha,beta-unsaturated aldehydes, commonly used in pharmaceutical and cosmetics industries [6].

The talk will discuss the effect of applied potential on the reaction activities and selectivies at potentials from 0 to 1.0V. In these investigations, FKB (FuMA-Tech) proton-exchange membrane was used with Pt/C as the electrocatalyst.  Figure 1 shows the formation rates of the hydrogenation products, crotyl alcohol and 1-butanol. The reaction rate increased with increasing applied potential from 0 - 0.5V then remained constant for potentials higher than 0.5 V. The best result was achieved at 1.0 V (selectivity toward crotyl alcohol of up to 33%). This level of performance is comparable to the average selectivity (45%) obtained from the thermocatalytic process [7-8].  The talk will also elucidate the reaction pathways for the hydrogenation of crotonaldehyde and its intermediates. This will be accomplished by analyzing the reaction rates for each elementary step in crotonaldehyde hydrogenation as illustrated in Figure 2. 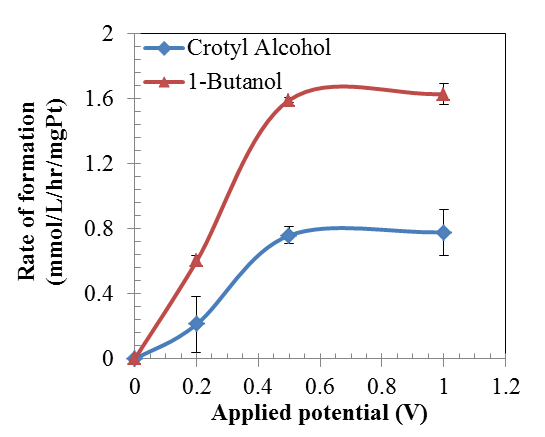