Theoretical analysis of the capillary driven transport of liquid in porous media is given for special cases of sudden expansion.  Elliptical and oblate spheroid coordinate transforms where used to find transient analytic solutions for two and three-dimensional expansions (Figures 1 and 2).  The fluid flow is simplified to potential functions, which reduces the equations to single dimensional, time dependent problems.  The asymptotic expression of the two-dimensional case is compared with the circular result of Hyvaluoma.  In three dimensions a spherical expansion is derived which is compared to the asymptotic solution of the oblate spheroid.  In both two and three dimensions, the expressions for expansion near the entrance are compared to the one-dimensional Lucas-Washburn equation and are shown to deviate from the classical result due to the sudden expansion.  The system in the two-dimensional case additionally includes the time dependent effects of a constant evaporation rate, allowing a steady state to be reached.  Two characteristic time-scales, one related to fluid capillary pressure and viscous resistance and the other to the evaporation rate, give a dimensionless evaporation number which shows the transport mechanism that dominates the time-dependent flow.

Figure 1:  Elliptic coordinates, used to describe the flow in an expanding 2D porous domain. The points –a and a are the foci of the ellipses. 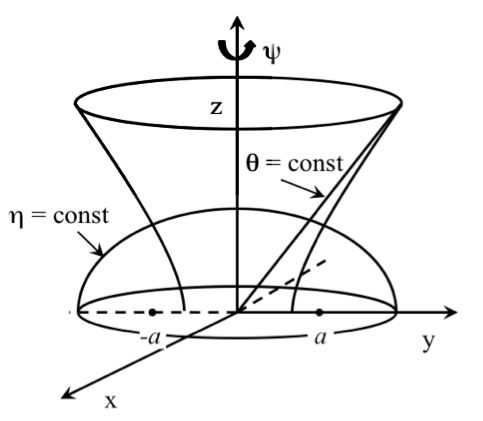 Figure 2:  Oblate spheroid coordinates, used to describe the flow in an expanding 3D porous domain. The points –a and a are the foci of the oblate surface corresponding to eta. Only systems with axial symmetry are considered.