Second generation bio-fuels are attracting interest as they are produced from non-food sources such as waste products from agriculture, forestry, or paper manufacture. These biomass sources have several advantages over conventional fossil feedstocks for their abundant availability, extremely low sulfur and nitrogen content, localized production, and reduction in greenhouse gas emissions (due to the CO2 consumption of biomass). The average composition of raw oil from pyrolysis of biomass has a high oxygen content (35-50 wt%) that results in low heating value, immiscibility with hydrocarbon fuels, high acidity, and chemical and thermal instability. The oxygen compounds can be removed through hydrodeoxygenation (HDO) reactions which entail cleavage of C-O bonds in the presence of hydrogen to form hydrocarbons and environmentally benign water. Reactions in HDO are similar to those in hydrodesulfurization (HDS) and hydrodenitrogenation (HDN) processes because they all involve the breaking of carbon-heteroatom bonds.  The similarity of HDO with HDS and HDN potentially allows integration of biomass conversion with the existing petroleum refining infrastructure for processing and transportation. Among new catalyst compositions that have been explored in hydrotreating processes, phosphides of transition metals stand out as potential substitutes for conventional sulfides. For example, nickel phosphide, cobalt phosphide, tungsten phosphide and molybdenum phosphide are highly active for HDS and HDN of petroleum feedstocks. This study has two objectives, first, to compare phosphides (Ni2P/SiO2 and WP/SiO2) prepared by the reduction of phosphate and phosphite precursors and second, to evaluate their activity in the hydrodeoxygenation of the bio-oil model compound, 2-methyltetrahydrofuran (2-MTHF). The latter is a five-atom saturated ring compound that has a methyl group which allows distinguishing between the ring-opening products and gives mechanistic information.

Hydrodeoxygenation of 2-methyltetrahydrofuran (2-MTHF) was carried out in a packed-bed reactor as a function of temperature at atmospheric pressure. Quantities of catalysts loaded into the reactor were equivalent to 30 umol of active surface metal atoms (from CO uptake measurements). The gas-phase feed contained 3.2% of 2MTHF in the H2 stream. The catalytic activities of all phosphides at different temperatures were presented as turnover frequencies (TOF) based on the same number of CO chemisorption sites. In both cases, nickel phosphide was more active with higher TOF values than tungsten phosphide. Between each method, nickel phosphide by the phosphate method had a TOF value about 1.4 times than that of the phosphite method while tungsten phosphide had practically the same TOF value for both methods.

The main HDO products of supported Ni2P were pentane and butane whereas the products of supported WP were mostly pentenes and pentadienes, suggesting different reaction pathways on these catalysts. Contact time studies were carried out to identify the intermediate products and determine reaction pathways. Quantities of catalysts loaded into the packed-bed reactor were equivalent to 5 umol of active surface metal atoms. For nickel phosphide from both methods, the phosphate method and the phosphite method, the product selectivities were similar with pentenes as primary products, 2-pentanone as a secondary product, and pentane as a final product; a reaction network involving surface intermediates was proposed in Scheme 1. In contrast, for tungsten phosphide the product selectivities depended greatly on the preparation method.  With WP/SiO2 (phosphite method) pentenes were produced prior to pentadienes indicating sequential hydrogen removal on a single site (Scheme 2). With WP/SiO2 (phosphate method) pentadienes were produced prior to pentenes, indicating a surface intermediate reacting on two active sites (Scheme 2). This result was consistent with the lower P content of the phosphate-method catalyst which would leave more open metal sites. 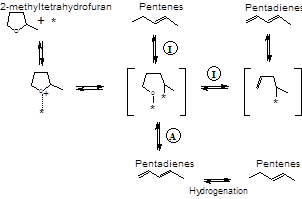