It is known that tendons are attached to bones across a specialized transitional tissue with varying structures (i.e., collagen fibers are less oriented at the insertion compared to the tendon) and compositions (i.e., the relative mineral concentration vs. distance across the insertion site shows an approximately linear increase across the interface.1 Efforts have been devoted to the development of scaffolds which could mimic the structure (i.e., collagen fiber orientation) and/or composition (i.e., mineral content) of tendon-to-bone insertions for the repair of rotator cuff injury. A number of studies demonstrated the fabrication of scaffolds with a gradient of mineral content for mimicking the composition and mechanical function of the interface between soft tissue to hard tissue (i.e., tendon-to-bone, ligament-to-bone, and cartilage-to-bone).2-4 However, few studies have centered on the creation of scaffolds capable of exhibiting the unique structural organization of collagen fibers seen at the native tendon-to-bone insertion site except that a recent study attempted to fabricate “aligned-to-random” nanofiber scaffolds by making use of a specially-designed collector during electrospinning for mimicking the structure of the tendon-to-bone insertion site.5 But some issues still remain in this study: the nanofiber scaffold has no gradual transitions from aligned portion to random portion; and there is apparent difference of the thicknesses between the two portions, which could easily cause breaking at the interface upon exerting a force. Therefore, so far no such a scaffold can fully recreate the gradients in structure found at the uninjured tendon-to-bone attachment.

In this study, we report a new and simple method for fabrication of nanofiber scaffolds with gradations in fiber organization by depositing random fibers on the uniaxially-aligned nanofiber mat in a gradient manner. These surfaces mimic the change in fiber orientation which presents at the tendon-to-bone insertion site. Tailoring the surface features in a user-specified manner can provide spatial control over cell response like cell morphology. Hence, we hypothesize that adipose-derived stem cells (ADCSs) could respond differently to different locations of such nanofiber surfaces. An adipose tissue is one of the sources of mesenchymal stem cells and ADSCs are very similar in nature to bone mesenchymal stem cells (BMSCs) in terms of multipotency.6 Adipose tissue is abundant in most individuals and can be harvested using a simple liposuction procedure which is less invasive and cause less discomfort and donor-site damage. In addition, adipose tissue has a significantly higher stem cell density than does bone marrow (5% vs 0.01%). ADSCs have been demonstrated for use in bone, cartilage, and tendon tissue engineering and are used in this study.

The uniaxially-aligned nanofibers were produced by electrospinning using an air-gap collector based on previous studies. Poly(ε-caprolactone) (PCL) (Mw=80,000 g/mol; Sigma-Aldrich, St. Louis, MO) was dissolved in a solvent mixture consisting of dichloromethane (DCM) and N, N-dimethylformamide (DMF) (Fisher Chemical, Waltham, MA) with a ratio of 4:1 (v/v) at a concentration of 10% (w/v). Polymer solution was pumped at a flow rate of 0.5 mL/h using a syringe pump. A dc high voltage of 12 kV was applied between the nozzle and a grounded air-gap collector made of aluminum foil (with an open void 2 cm × 5 cm). Subsequently, the uniaxially-aligned nanofibers were easily transferred to a glass slide. Nanofiber scaffolds were fabricated using the setup shown in Figure 1. Briefly, a glass slide covered with uniaxially-aligned nanofibers served as a collector. A movable plastic mask was connected to a second syringe pump and placed 2 mm above the collector during deposition of random fibers.

Human ADSCs were obtained from Cellular Engineering Technologies (Coralville, IA) and were cultured in α-modified Eagle's medium (α-MEM) supplemented with 10% fetal bovine serum (FBS, Invitrogen) and 1% gentalmycine/streptomycin (Invitrogen) at 37 °C in an atmosphere of  95% air / 5% CO2. Cell culture medium was changed every 2 days. Prior to cell seeding to nanofiber scaffolds, cells were trypsinized and counted. Around 1×104 cells were seeded on each nanofiber scaffold without encapsulation of coumarin 6.

Once we demonstrated successful generation of random fiber deposition, we studied whether this gradient fiber orientation can direct morphological changes following incubation with ADSCs.  Scaffolds generated using the techniques above were incubated with ADSCs for 3 and 7 days.  Live cells were detected using a fluorescein diacetate (FDA) assay (Figure 3, A-H), The response of pre-seeded ADSCs to underlying nanofiber scaffolds was quantified by measuring the orientation of individual cells relative to the long axis of the fibers (Figure 3I). The distribution of cell orientations demonstrated that ADSCs seeded on random nanofibers lacked organization and directional specificity, as the cells projected in all possible directions. In contrast, ADSCs seeded on the aligned scaffolds demonstrated orientation and alignment along the fibers in contact with the cells. In these cases, approximately 70% of the cells were oriented within 20o of the axis of nanofiber alignment. Comparison of the distributions of ADSCs orientations on the various portions of scaffolds using the Kolmogorov-Smirnov test further confirmed that the pattern of cellular orientation observed at different portions (distance > 4 mm) on the nanofiber scaffolds was significantly different  (p < 0.05).

To broaden potential biomedical applications, chemical gradients were established on this novel scaffold using nanoencapsulation. Coumarin 6-loaded random PCL nanofibers were generated in gradient fashion.  We quantified the fluorescence intensity by measuring the grey scale using Image J software. It is observed that the fluorescent intensity increased along the distance. This method could be readily extended to fabricate two-component gradients on the surface by depositing random fibers twice in two different directions. 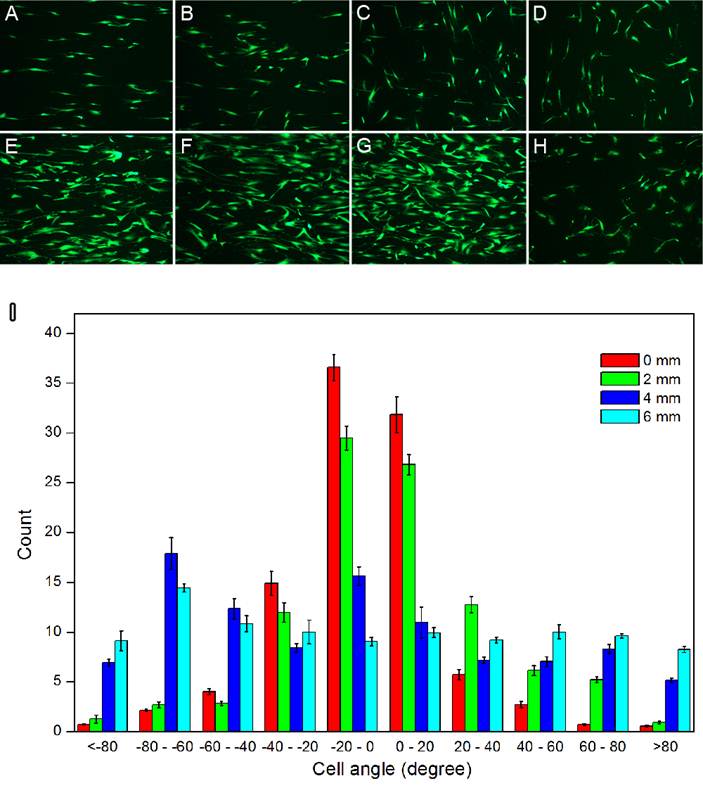 We have demonstrated a simple, robust and facile method to fabricate nanofiber scaffolds with gradations in fiber organization, which could potentially mimic the structure (i.e., collagen fiber organization) at tendon-to-bone insertion site. We also demonstrated that ADSCs seeded on such a scaffold exhibited different morphologies at different locations. In addition, we demonstrated the formation of nanofiber surfaces with chemical gradients through encapsulation of desired materials inside deposited nanofibers. By incorporating mineral gradient to this scaffold, it could be used to recapitulate both structure and composition of tendon-to-bone insertion site to a considerable degree, which may be promising for the repair of tendon-to-bone insertion.