A great advancement in development of bone scaffolds with various compositions and structures have been achieved using many techniques. Among them, electrospinning has been attracted much attention for fabrication of nanofiber scaffolds for use in bone tissue regeneration in that a non-woven mat of electrospun nanofibers can serve as an idea scaffold to mimic the extracellular matrix for cell attachment and nutrient transportation owing to its high porosity and large surface-area-to-volume ratio.1 Recent efforts have been focused on the development of composite nanofiber scaffolds which can better mimic the composition and further match the mechanical property of natural bone.2-4 There are two approaches for developing composite nanofiber scaffolds -  incorporating inorganic phase materials (e.g., hydroxyapatite, octacalcium phosphate), which are one of the compositions of natural bone and precursors, to organic phase materials (e.g., biodegradable polymeric nanofibers): i) encapsulating inorganic phase materials (e.g., hydroxyapatite nanoparticle, nanorods) inside polymeric nanofibers; ii) depositing inorganic phase materials on the surface of polymeric nanofibers. The encapsulation of inorganic materials could improve the mechanical property of fibrous materials. However, the fiber surface is not optimized being a support to maintain desirable cell-substrate interaction. Direct deposition of inorganic materials on the nanofiber surface can not only enhance its mechanical property but also provide favorable substrate for cell proliferation and osteogenic conduction.

Composite fibers were fabricated in two different ways. One was to coat mussel inspired protein on the surface of plasma-treated, electrospun fibers and subsequently perform biomineralization of polydopamine-coated fibers. Specifically, nanofiber materials were treated with plasma for 8 min and then immersed in 0.2 mg/mL dopamine·HCl  in Tris buffer (pH 8.5) for 4 h. Polydopamine-coated nanofiber materials were then washed with DI water to remove excess monomer. Subsequently, the fiber mat was immersed in a supersaturated solution of 10×SBF which was prepared from NaCl, CaCl2, and NaHPO4·H2O in the presence of different amounts of NaHCO3. The composition of 10×SBF was shown in Table 1. The ion concentrations in 10×SBF solution were 1 M of Na+, 2.5×10-2 M of Ca2+, and 1.0×10-2 M of HPO4-. The other is to directly biomineralize fibers in the mineralized solution in the presence of different amounts of dopamine and NaHCO3.

Fiber mats were cut into sections and fixed onto a paper frame. Gauge length and width was set to 10 mm and 5 mm according to the frame size and the thickness of each sample, pre-determined by light microscope. Samples were mounted on a nano tensile tester (Nano Bionix, MTS, USA) and the edge of frame was cut before testing the fiber samples. Ten samples were stretched to failure at a low strain rate of 1%/sec at room temperature while related displacement and force values were recorded.

In this work, we chose PCL as a model material because it is a biocompatible and biodegradable polymer that has been approved by FDA for certain human clinical applications. We firstly coated electrospun PCL fibers with polydopamine following our recent study. Specifically, PCL fibers were plasma treated and immersed in 0.2 mg/mL dopamine solution at pH 8.5 for 4 h. Morphology was similar between polydopamine-coated and un-coated fibers, with both fiber populations demonstrating consistent fiber diameters and limited surface roughness. Subsequently, we immersed polydopamine-coated PCL fibers in 10×SBF solutions at 37oC for 24 h in the presence of 0.01 M and 0. 04M NaHCO3. We examined the influence of NaHCO3 concentration on the mineralization of polydopamine-coated PCL fibers. At a low concentration (0.01 M), large, thin, and plate-like minerals tended to be formed and loose structure of minerals was observed on the fibers. At a high concentration (0.04 M), smaller grain size of minerals displayed on the fibers and denser coating of minerals was seen compared to the samples fabricated in a low concentration of NaHCO3. The diameter of fibers after coating for 24 h was around 1.2 µm. We also investigated the mineralization of polydopamine-coated PCL fibers at these two concentrations for longer period time (72 h). At low concentration, more plate-like minerals were seen on the surface of fibers and the fibrous morphology was still visible.  In contrast, minerals coated on the fiber surface in the presence of higher concentration of NaHCO3 were dense and smooth. The fiber diameter was around 2.8 µm after 72 h coating.

In order to examine the influence of dopamine, we explored the mineralization of PCL fibers for 24 h in the presence of 0.04 M NaHCO3 and a series of concentrations of dopamine (Figure 1). 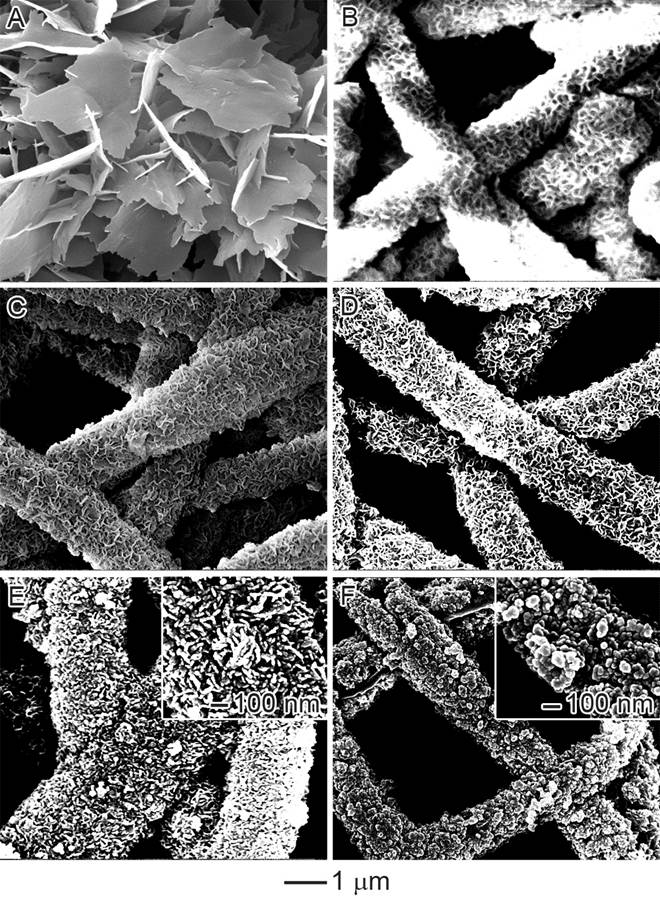 We also examined the mineralization of PCL fibers in 10×SBF solutions containing 0.04 M NaHCO3 and 0.2 mg/mL dopamine at 37oC for different times. The dense and smooth mineral coatings were observed. The fiber diameters increased with increasing the mineralization time.

We have demonstrated the biomineralization of electrospun PCL fibers by making use of polydopamine as a filler or “bioglue” to bridge the minerals and polymeric fibers. We found that the morphology, grain size, and thickness of CaP mineral coating on PCL fibers can be readily controlled by adjusting the composition of mineralized solution, surface property of fibers, and duration of mineralization. The mineral coating was found to enhance the mechanical property of fibers to large extent.

Extended Abstract: File Not Uploaded
See more of this Session: Surface Modification and Characterization of Biomaterials
See more of this Group/Topical: Materials Engineering and Sciences Division