Regenerative medine emerged in the 1980s and has continuted to evolve as an exciting and interdisciplinary filed to develop tissue constructs which can be used to restore, replace or regenerate defective tissues or organs.1 The most pormising strategy which have been adopted for the creation of tissue constructs is to use a combination of cells and materials typically in the form of scaffolds. The scaffolds provide the structural support for cell attachment and subsequent tissue development. The determination and control of cell-material interaction are very important to ensure that the materials and host are compatible and function properly.2 Previous studies demonstrated that cell behaviors could be controlled by manipulating the physical and chemical properties of the culture substrates.3-5 These studies could provide important fundamental information on how to regulate cell behaviros using these cues, however, they oversimplified the scenario of microenvionment where cells usually live. Electrospun nanofibers can be used to mimic the 3D archtecture of extracellular matric owing to its high surface-to-volume ratio and fibrous morphology.6 Comparing to other surface features, nanofibers are more physiological relevant. The aim of present study is to design electrospun nanofiber scaffolds for regulating behaviors of various cell types.

Fiber mats were firstly treated with plasma. Subsequently they were immersed in 0.2 mg/mL of dopamine.HCl of 10mM Tris buffer (pH 8.5) over 4 h and rinsed with water for later use. Fibronectin conjugation to nanofibers was performed following previous study. Specifically, the polydopamine-coated nanofibers were transferred into fibronectin solution (50 µg/mL sodium phosphate buffer, pH 7.8) for overnight. The membrane was washed three times with PBs prior to cell culture.

NIH3T3 cells were cultured at 37°C in a 95% air and 5% CO2 atmosphere. Dulbecco's modified Eagle's medium (DMEM) supplemented with 10% fetal bovine serum (FBS, Invitrogen) and 1% gentalmycine/streptomycin was used as the cell culture medium and was changed every 2 days. Prior to seeding the cells on the scaffold, cells were trypsinized and counted. Around 1×104 cells were seeded on each scaffold. At 2 h, 4 h, and 24 h, the live cells were stained with Calcein AM (Invitrogen) and F-actin was stained with Alexa Fluor 488® phalloidin (Invitrogen).

Promotion of robust cellular adhesion is critical for the chronic success of implantable biomaterials, such as nanofiber matrices.We modified electrospun nanofiber scaffolds with various surface chemistries. The thickness of polydopamine coating can be readily controlled by adjusting the concentration of dopamine and reaction time indicated by TEM images. XPS analysis further confirms the coating. Mechanical test shows the increase of stiffness after coating process. We show that biomacromolecules like fibronectin can be directly immobilized on the surface of polydopamine-coated, electrospun nanofibers, resulting in the increase of NIH3T3 cell adhesion in the order of pristine nanofibers, polydopamine-coated nanofibers, and fibronectin-immobilized, polydopamine-coated nanofibers. Figure 1 shows live cell staining on seeded nanofiber scaffolds after incubation for 2, 4, and 24 h, indicating polydopamine coating and fibronectin immobilization resulted in enhancement of NIH3T3 cell attachment, spreading and cytoskeletal development. 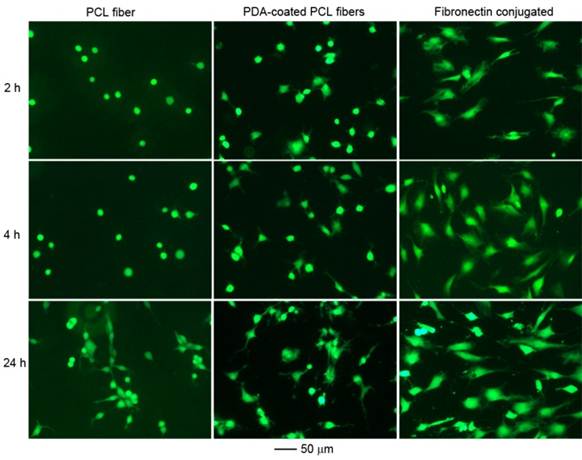 By utilizing a unique collector composed of a central point electrode and a peripheral ring electrode during electrospinning prcess, we sucessfully fabricated scaffolds consisint of radially-aligned nanofibers. This novel class of scaffolds was able to present nanoscale topographic cues to cultured fibroblasts, directing and enhancing their migration from the periphery to the center.

By varying nanofiber densities, surface properties, and culture supporters, we were able to control the direction of neurite outgrowth projected from dorsal root ganlia, embryoid bodies, or dissociated embryonic stem cells which were seeded on scaffolds made of uniaxially-aligned nanofibers. In addition, we were capable of control the differentiation of embryonic stem (ES) cells by utilizing nanofibers as a culture substrate. We found that seeding a low density of dissociated ES cells onto uniaxially aligned PCL nanofiber scaffolds could make ES cells differentiate into neurons instead of astrocytes.

In summary, we have demonstrated the control over the cell adhesion, cell migration, cell differentition, and neurite outgrowth using designed electrospun nanofiber scaffolds. These scaffolds could be promising for use in various tissue engineering applications.