268054 Towards Ex Vivo Platelet Manufacturing: The Importance of Matrix Elasticity and Shear Force On Megakaryocytic Differentiation

Matrix elasticity (Engler et al., Cell 126: 677 (2006)) and biomechanical (shear) force (Baruch et al., Blood 114:1975 (2009)) have been identified as important differentiation cues for stem cells. In this study, we investigated how these biomechanical/biophysical signals affect megakaryocytic (Mk) differentiation from hematopoietic stem and progenitor cells (HSPCs), aiming to uncover signaling mechanisms behind these effects, and establish better culture environment for Mk differentiation and platelet biogenesis. Application of shear stress (2.5 dyne/cm2; physiological range: 1.3~4.1 dyne/cm2) to CHRF cells, a well-established Mk cell line, adherent to fibronectin-coated surface for two hours resulted in retraction, shedding and formation of cytoplasmic extensions (proplatelet-like structures), whereas there were no morphological changes in static culture. Primary human Mks derived from HSPCs in vitro also deformed their cell shape and formed proplatelet structures in response to flow application (1 dyne/cm2). In addition, shear force accelerated endomitosis as assessed by flow-cytometry based analysis of BrdU incorporation: CHRF cells exposed for two hours to shear flow had 16% more BrdU positive cells compared to cells under static conditions. The stress responsive p53 is a regulator in both cell-cycle arrest by laminar flow (Zeng et al., JBC 278: 24594 (2003)) and Mk differentiation (Fuhrken et al., JBC 283: 15589 (2008)). To determine if p53 is involved in the response of CHRF cells to shear stress, Western analysis was used to show that two hours of exposure to shear (2.5 dyne/cm2) increased the ratio of K382-acetylated p53 to total p53 by more than 188% (n=3, p<0.05) while total p53 protein expression did not change significantly. These data suggest that p53 acetylation is mediating, partially at least, the response of Mk cells to biomechanical forces. In order to examine the effect of matrix elasticity on Mk differentiation, polyacrylamide gels were used to control elasticity. We coated the gel surface with fibronectin to provide holding points for CHRF cells to sense gel elasticity. As matrix elasticity increased, the % of CHRF cells with cytoplasmic extensions increased first and decreased later (Fig. 1, n=3, Error bar: SEM). The highest percentage (17%) of CHRF cells displaying cytoplasmic extensions was observed on a gel with elasticity (ca. 8.2 kPa) mimicking the in vivo vascular niche. Non-muscle myosin IIA (NMMIIA) has been shown to serve as elasticity sensor in mesenchymal stem cells. Thus, we aimed to investigate the role of NMMIIA in the response of CHRF cells to matrix elasticity. Blebbistatin, an inhibitor of NMMIIA, minimized the differences of the percentage of cells with cytoplasmic extensions between gels with different elasticity (Fig. 2), thus suggesting that NMMIIA is involved in the response of CHRF cells to matrix elasticity and may also serve as a biological elasticity sensor. As shown by fluorescent microscopy, the cellular distribution of NMMIIA was directed by matrix elasticity (Fig. 3). On soft gels (75 Pa; n=3), NMMIIA was concentrated in the center of the cytoplasm. On a moderately stiff gel (5.6 kPa; n=3), NMMIIA was distributed across the whole cell, while on glass (the stiffest condition tested; n=3), NMMIIA moved into the nucleus and the tips of cytoplasmic extensions. Others have shown NMMIIA is involved in regulation of gene expression when it moves into the nucleus, so our observation is that NMMIIA translocates into the nucleus as gel elasticity increases, thus strongly suggesting that NMMIIA may regulate gene transcription during proplatelet formation and platelet biogenesis. We are working to further investigate and prove this hypothesis. Our data shed light on the largely unexplored role of biomechanical and biophysical parameters (of physiological significance) on Mk differentiation.  The impact of these parameters is both of physiological and practical significance in the context of platelet biogenesis and ex vivo platelet generation. 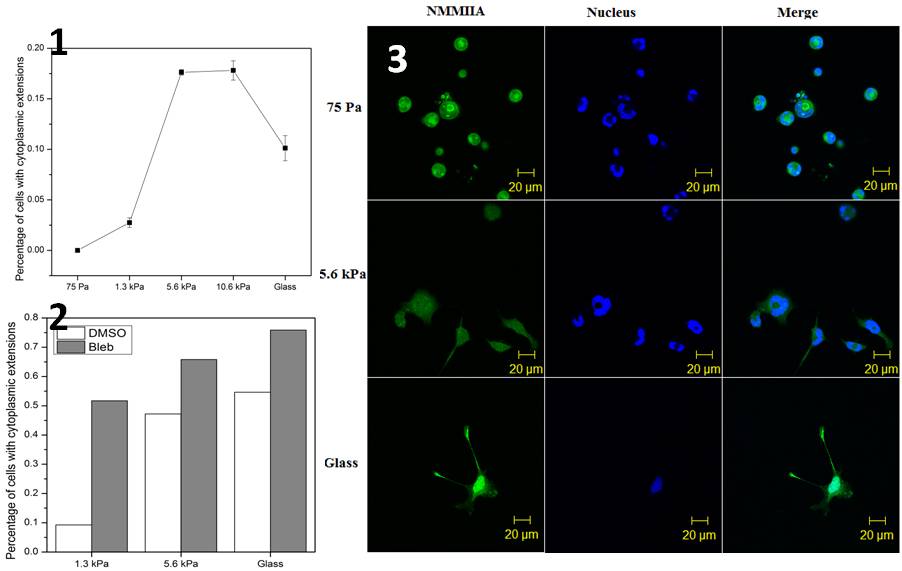