A Novel MILP Approach to the Synthesis of Thermally Coupled Distillation Sequences.

The distillation is still the most widely used separation technique in the chemical industry. It handles more than 90% of separations and purifications and this trend seems unlikely to change in the near future. The capital investment for these distillation systems was estimated in 8x109 US$ [1]. Using data by Mix et al [2], Soave & Feliu [3] calculated that distillation accounts about the 3% of the total US energy consumption which is equivalent to 2.87x1018 J (2.87 million TJ) a year or to a power consumption of 91 GW or 54 million tons of crude oil.

A renew interest in Thermally Coupled Distillation (TCD) appeared in, say the last 15-20 years, due the important potential savings in energy: typical values around 10% to 40% (in some cases even larger) has been reported [4-9] when compared with conventional distillation sequences. An although the TCD can only be implemented in mixtures involving the separation of at least three components the reader can have an idea of the impact just looking at the numbers presented in the first paragraph.

The design of TCD sequences is much more complex than conventional distillation (each column with a condenser and a reboiler) by at least two reasons. First, the number of alternatives is much larger and second when we introduce a thermal couple we are introducing also two thermodynamically equivalent configurations (TEC) [10-12],. Therefore, the number of alternatives rapidly increases (i.e. in a five component mixture there are 203 basic configurations, more than 8000 if we consider internal heat exchangers and more than 2·105 if we take into account TEC). In order to avoid the degeneracy created by TEC it is convenient to use a task based approach instead of a column based approach. –All TEC shares the same sequence of separation tasks-.

As noted by Andrecovich and Westerberg [13] in the 80's of last century, when we consider conventional separation sequences, we can, a priori, optimize each possible column of the sequence, and then use a MILP approach to extract the optimal sequence. But, when we deal with non-sharp separations we cannot know a priori the distribution of no-key components and therefore we must simultaneously optimize the columns and the sequence which produces a non-convex MINLP even with shortcut methods [4, 5, 14]. However, taking into account the following two facts, it is possible to develop a strategy that allows decoupling the column and sequence optimization in TCD systems.

2.     In TCD sequences the flows of some column sections are not in the optimal operation conditions because they must be modified in order to accomplish with the mass balance. But, the introduction of heat exchangers allows decoupling these sections and avoids the necessity of a simultaneous optimization.

It is possible then generating a tree of possible separation tasks as follows:

1.     First we consider, and optimize, all the initial separation tasks (those that have the initial mixture as feed).

2.     For each of the products (distillate and bottoms of each column) we generate all the possible separations. At this point we consider that mixtures of the same components with different concentrations or different thermal states are different -explicitly takes into account the possibility of a heat exchanger or a thermal couple-.

The number of possible separation tasks is large, but much smaller than the number of sequences. Using the Underwood-Fenske shortcut method the complete tree for a 5 component mixture can be generated in around 4-5 seconds of CPU time.

The final step consists of extracting the optimal separation sequence. However this is not straightforward. The simple connectivity, like in conventional columns, does not assure a feasible basic sequence:

b)    For some internal mixtures, there are more than one possible separation task that depends on their origin (which separation task generate it) and the thermal state (include or not a heat exchanger or a thermal couple). Therefore it is necessary to include a set of logical relationships to assure the feasibility and relates the tree of separations with the feasible alternatives.

c)     Divided Wall Columns (DWC) are explicitly included. A DWC is generated by a subsystem of three fully thermally coupled tasks [15] and some logical relationships added to avoid only feasible configurations.

As all the data of all the separation tasks is calculated when each of the individual columns are calculated, the resulting problem is a MILP in where we select the best feasible sequence of tasks (i.e. the sequence with minimum Total Annualized Cost). Calculate the excess of defect of heat (or vapor flows) in the connectivity of each individual task and estimate the extra cost (energy).

As an example considers a mixture of 5 hydrocarbons (all relevant data and main results are showed in Table 1).

The optimal solution includes a DWC and a set of small heat exchangers in the final products that appears as a consequence of the differences in the flows in the different column sections –See Figure 1-. Alternatively it is possible to remove all these heat exchangers by adjusting the flows in the implied column sections. The net result will be an increase in the heats of reboiler (associated with product E) and condenser (product A) approximately in the same quantity of the heat removed in the intermediate products. This could have two opposite effects. In one side we remove three heat exchangers, but at the same time we lose the possibility of using utilities at intermediate temperatures. 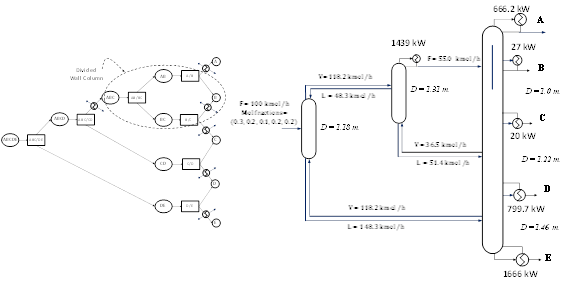 Figure 1. Sequence of separation tasks and a possible arrangement in actual columns.

Table 1. Data and results for example 1.

The authors wish to acknowledge support from the Spanish Ministry of Science and Innovation under project (CTQ2009-14420-C02).