In addition to surface area, pore size and pore interconnectivity, surface chemistry can play a significant role in electrochemical double layer capacitance [1]. Introduction of surface oxygen groups has been shown to improve capacitance of carbon materials by increasing wettability and adding sites for pseudocapacitance [1]. On the other hand, oxygenated groups also promote carbon corrosion, leading to an increase in series resistance and decrease in capacitance over time [2]. Nitrogen functional groups are a suitable alternative to oxygen functionals as N-doped carbons have been shown to be highly stable and have pseudocapacitive properties similar to oxygen groups in electrochemical systems [3, 4]. However, the effect of nitrogen surface groups on capacitance is not well understood.

Ordered mesoporous carbon (OMC) synthesized by hard-templating methods has well connected mesoporous system with a very narrow pore size distribution [5]. Furthermore, by using a nitrogen-containing carbon precursor, nitrogen surface groups can be readily introduced onto the surface of the OMC while possessing a nearly identical structure to its N-free and oxygen-containing analogs.  Hence, nitrogen doped ordered mesoporous carbon (NOMC) is an ideal system to study the effects of both the pore structure and surface chemistry on capacitance.

In this study, the hard template, SBA-15, was prepared by self-assembly of the triblock copolymer Pluronic® P123 (E20PO70EO20, BASF) and tetraethyl orthosilicate (TEOS), whose hydrolysis and polycondensation was catalyzed by 2 M HCl.  Pyrrole was then vacuum infiltrated into the template, polymerized to polypyrrole, and carbonized at high temperature for 3 h in inert atmosphere. Finally, the template was removed in hot 10 M KOH. The NOMC obtained was divided into four batches and heated to 800, 1000, 1200 and 1400 °C. The carbons were characterized using TEM, BET and XPS. Electrochemical measurements were performed in a three electrode cell in 0.5 M H2SO4 at room temperature. 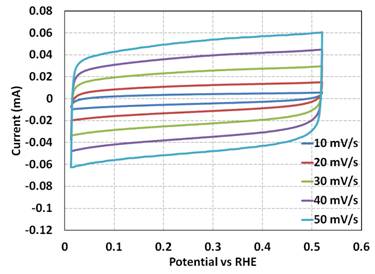