Batch distillation is widely used in fine chemical and pharmaceutical industries for the purification or recovery of high value-added products. The transient nature of the batch distillation process provides great flexibilities in both various operating policies and alternative complex configurations. Such unique characteristics can help further explore the economic potential and process efficiency through the optimal synthesis of batch distillation process. However, the dynamic behavior and complicated economical trade-offs make a huge challenge for the synthesis problem.

Over the past decades, the optimal design and operation of batch distillation have received significant attentions (Logsdon, Diwekar and Biegler, 1990; Mujtaba and Macchietto, 1996; Sharif, Shah and Pantelides, 1998; Low and Sørensen, 2003).  The previous works have provided some general insights on the comparative performances of various batch distillation systems and indicated that the interdependent design and operating control variables should be optimized simultaneously. Furthermore, different configuration of batch distillation column was also taken into account as an optimization parameter with the method of a disjunctive model consisting a given set of equipment modules and the corresponding logical relationships provided by the design context (Oldenburg, Marquardt and Leineweber, 2004; Low and Sørensen, 2005). With the development of manufacture and control in chemical industry, more efficient and energy saving techniques are applied in batch distillation process. As a result, the number of possible batch distillation column configurations and complex operating strategies proposed in the literature continue to increase, such as the side withdrawals, thermally linked streams or other complex designs. So there is an urgent need to propose a completed superstructure of batch distillation system that encompasses all possible configurations and operating strategies to reduce the energy consumption and capital investment, and eventually achieve the profit maximization. The incompletion of the superstructure may preclude a series of design alternatives, where the optimal solution may actually lies.

In this work, an improved superstructure based on state space representation (Bagajewicz and Manousiouthakis, 1992), a framework that takes all streams splitting and mixing possibilities into consideration, is proposed for the synthesis of batch distillation process. The state space based superstructure has been successfully used for the synthesis of continuous distillation process to reduce both the utility and capital costs (Zou et al., 2012), and we take the unique characteristics of batch distillation process (dynamic behavior and tray-vessel configuration) into account to develop the superstructure. To be specific, the superstructure of batch distillation system is viewed as a system of two interconnected parts (see Figure 1). One is referred to as the distribution network (DN), in which all mixers, splitters and the connections between them are embedded. The other is the so-called process operator (PO), which is further divided into two kinds of equilibrium stages, i.e. the vessels and the trays, with intermediate condenser and/or reboiler. From the superstructure we can see that the initial feed stream can be charged into arbitrary number of vessels according to its property, such as the number of components and each composition in the feed stream. Then the streams out of the vessel(s) are delivered to DN for distribution to arbitrary trays for further mass and heat exchanges, and similarly, the trays are fully connected to each other and also have opportunities to distribute streams to arbitrary vessels through DN. Finally, when the required purities are satisfied, each product can be collected in certain vessel or withdrawn from certain tray.

Based on the analysis above, all possible configurations of batch distillation, not only three typical structures (regular, inverse, multivessel columns), but also more complex designs (like thermal links, side withdrawals, etc) are merged into the superstructure. Considering the Mass balance, Equilibrium relation, Summation check and Heat balances (MESH) for each of equilibrium stage, all mixers and splitters, the overall synthesis problem can be formulated as a mixed integer dynamic optimization (MIDO), where the sales revenue, operating costs (including costs of cold and hot utilities) and equipment cost (including costs of distillation columns and heat exchangers) can be all considered to maximize the overall profitability. Therefore under this framework, the design variables (the number and the connecting relations of vessels and trays) and the operating control variables (the flow rate of each stream) are optimized simultaneously, and then an optimal batch distillation process for a given separation duty is achieved.

In summary, since (1) with the mechanism of arbitrary split and/or mix of any streams, as well as the arbitrary connections between any vessels and trays, all possible operating strategies and batch distillation column configurations are embedded in the completed superstructure, and (2) both operating strategy and column configuration can be simultaneously optimized in each time interval. So it is reasonable to expect that a more efficient batch distillation process can be achieved for the specific separation duty. From the comparison analysis of the example results, not only dramatic energy savings but also significant capital investment reduction has been brought in our novel conceptual designs. Both binary and multicomponent separation case studies are presented to illustrate the validity and advantages of the proposed approach. 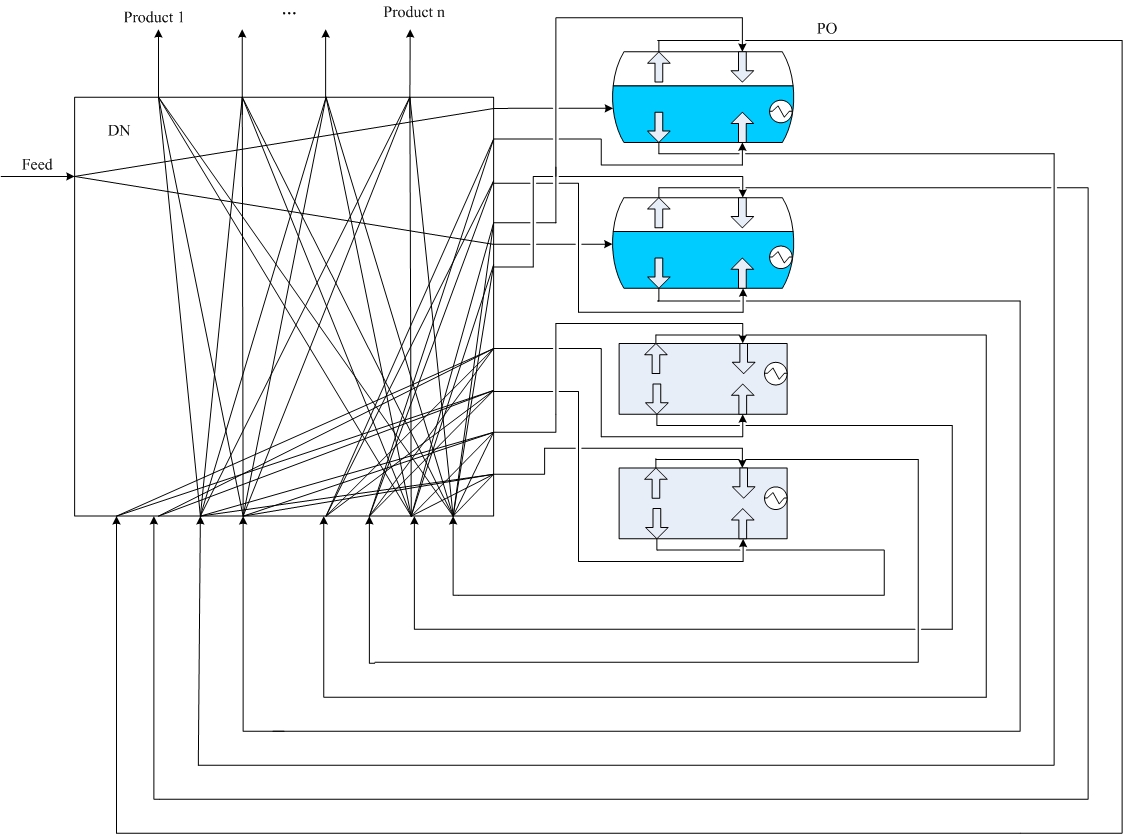