Solid-liquid flows are widely encountered in various industrial processes like dispersion and classification. Accurate numerical simulations would be helpful both for the design and investigation of operational conditions in these processes. For these simulations, modeling of the free surface and the solid-liquid coupling is important. Because the Lagrangian approaches do not need complicated techniques like adaptive mesh required by Eulerian approaches, they may handle these problems effectively. As far as the Lagrangian approaches for fluids are concerned, smoothed particle hydrodynamics (SPH) (Monaghan, 1988) and moving particle semi-implicit (MPS) method (Koshizuka & Oka, 1996) have been thoroughly studied. These Lagrangian methods have advantages in that they are not affected by the numerical diffusion and can simulate a large deformation of the free surface flows relatively easily.

Two types of approaches have been used to simulate solid-liquid flows. One is direct numerical simulation (DNS) and the other is the local volume average technique (Anderson & Jackson, 1967). For the DNS-based method, the disadvantage is that too fine a discretization is required for the precise computation. On the other hand, although experimental equations are needed, the local volume average technique can reduce the computational load significantly for practical systems.

In the present study, we developed a new approach with the local volume average technique namely the DEM-SPH method, by coupling the discrete element method (DEM) (Cundall & Strack, 1979) with the SPH method. The DEM is also a Lagrangian method which has been widely applied in powder systems. With the DEM-SPH method we perform three-dimensional simulations of solid-liquid flows inside a cylindrical tank and conduct validation experiments. The angles of repose and solid particle distributions obtained from simulations and experiments were compared, where a good agreement was shown. Consequently, the DEM-SPH method can accurately simulate a 3D solid-liquid flow.

On simulating a multi-phase flow, the interaction model must be constituted properly to describe momentum exchanges between phases. The void fraction (the volume fraction of fluid phase in the context of solid-liquid flows) determines the liquid-solid interaction force (the drag force) as

where ε denotes the void fraction. For the value of β, a combination of (Ergun, 1952) and (Wen & Yu, 1966) is employed and a void fraction of 0.8 has been adopted as the boundary between these two regimes.

In this study, the forces of drag, pressure gradient, gravitation and contact were taken into consideration. The contact force acting on a solid particle is estimated by the DEM, where the inter-particle forces are determined using a Voigt model as shown in Figure 1. 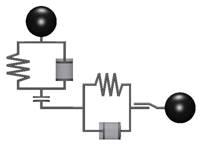 In the SPH method, the continuous material is divided into assemblies of particles. These SPH particles carry physical quantities and move according to the Lagrangian material velocity. The SPH particles are totally mess-free, which allowed more flexibility in modeling fluid motions. An SPH particle interacts with its vicinity according to a kernel function W(r, h), where r is the relative position vector and h defines the influence domain of the kernel estimation. In this study we deployed the commonly used cubic spline kernel proposed by (Monaghan & Lattanzio, 1985).

Incorporating the void fraction and drag force, the momentum conservation equation in SPH formulation can be written as

where σ is the stress tensor and Π is an artificial viscosity term. To solve the above equation, the "equation of state" for liquid is used to estimate the pressure under a weak compressibility assumption (Monaghan, 1994),

where c is the speed of sound in the fluid, ρ0 is the reference density, and γ is set to 7.0.

The DEM-SPH method was applied to the solid-liquid flow in a cylindrical tank. The results were herein compared with validation experiments.

Figure 2 shows a schematic diagram of the domain of interest. It was a cylinder with inner diameter and depth of 100 mm. The water level was set to be half the height of the tank. The tank was rotated at 102 rpm. The properties of the solid and liquid phases are given in Table 1.

Two different calculations were performed in the current study. The number of solid particles simulated was consistent with the bed height in the validation experiments, and was set to be 7755 in Case 1 and 5304 in Case 2.

The experimental device is of the same dimension as the simulated system. Glass beads with an average diameter of 3.0 mm were used as solid particles. The fluid was water. Photographs of the rotating cylinder were taken to obtain the results. Figure 3 shows the initial configuration of Case 1. 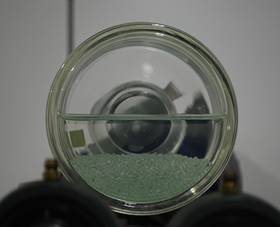 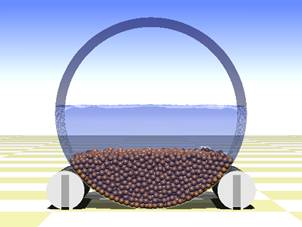 Figure 3 Initial configurations of the experiment and simulation (Case 1)

In this study, we concentrate on the behavior at a quasi-steady state. A set of snapshots from Case 1 is shown in Figure 4 to help understand transient changes in the rotating tank. 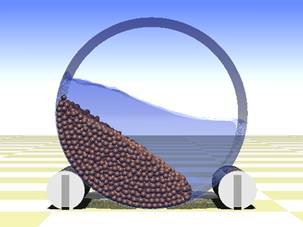 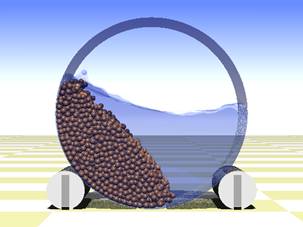 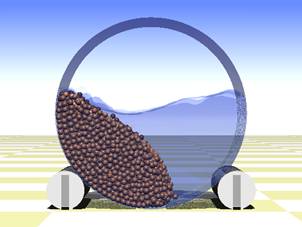 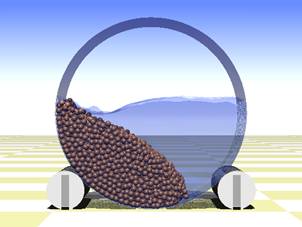 The results for Case 1 are described below. Representative snapshots were shown in Figure 5. The simulation results were in agreement with the experimental results: the bed slope was bilinear (as shown by red lines in Figure 5); the angle of repose at the upper side, the solid bed height and width were of similar values, as shown in Table 2. The close correspondence shows the accuracy of the DEM-SPH method. 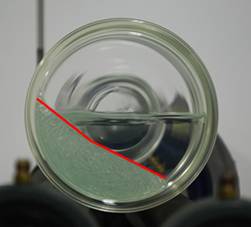 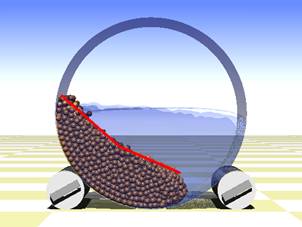 Figure 5 Comparison of the experimental and simulation results (Case 1)

Table 2 Comparison between the simulation and experimental results (Case 1)

The results of Case 2 at quasi-steady state are shown in Figure 6. Again, a bilinear shape of the bed slope as found for both the experiment and simulation was observed. Numerical comparisons of the angles of repose, the solid bed height and width are measured and presented in Table 3. Note that there is a larger discrepancy between simulated and experimental results in this case than in Case 1. However, these results are still close and reasonable. 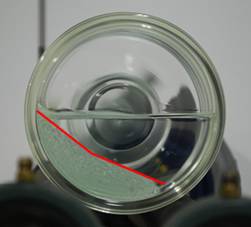 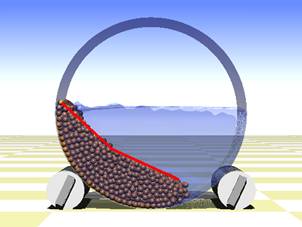 Figure 6 Comparison of the experimental and simulation results (Case 2)

Table 3 Comparison between the simulation and experimental results (Case 2)

These comparisons showed good agreements in macroscopic respects. This implies that the DEM-SPH method has successfully modeled free surfaces of fluids, solid-fluid coupling and solid-solid interaction.

However, two factors may have contributed to the observed differences between the simulations and experiments. Firstly, in modeling the drag force, it was assumed that the solid particles would be distributed evenly over the solid-liquid boundary. Deviations from this assumption would perturb estimating the drag force. Secondly, some interaction effects such as lubrication were not taken into consideration in the present model.

The DEM-SPH method was developed to perform a three-dimensional simulation of a solid-liquid flow involving free surfaces. It was validated with the two phase flow in a rotating cylindrical tank. Hence, we have shown that the DEM-SPH method is effective in simulating solid-liquid flows involving free surfaces. Experiments using a Particle Image Velocimetry are planned in the near future.

This study was financially supported by a Grant (22760579) from the Ministry of Education, Culture, Sports, Science and Technology (MEXT), Japan.