266712 Microfluidic Cell Deformation As a Robust, Vector-Free Method for Cytosolic Delivery of Macromolecules

Intracellular delivery of macromolecules is a critical step in therapeutic and research applications. Nanoparticle mediated delivery of DNA and RNA, for example, is being explored for gene therapy1, while protein delivery is a promising means of affecting cellular function in both clinical2 and laboratory3 settings. Other materials, such as small molecules, quantum dots, or gold nanoparticles, are of interest for cancer therapies4,  intracellular labeling5, and single molecule tracking6.

The cell membrane is largely impermeable to macromolecules. Many existing techniques utilize polymeric nanoparticles7, or chemical modifications of the target molecule, such as cell penetrating peptides (CPPs) 8, to facilitate membrane poration or endocytotic delivery. In these methods, the delivery vehicle's efficacy is often dependent on the structure of the target molecule and the cell type. These methods are thus efficient in the delivery of structurally uniform materials, such as nucleic acids, but often ill-suited for the delivery of more structurally diverse materials, such as proteins9 and some nanomaterials10. Moreover, the endosome escape mechanism that most of these methods rely on is often inefficient; hence, much material remains trapped in endosomal and lysosomal vesicles.

In this presentation, we detail a method for cytosolic delivery based on rapid mechanical deformation of the cell to produce transient membrane disruptions that facilitate the passive diffusion of material into the cell cytosol.  This method was developed with the aim of delivering almost any macromolecule of interest to almost any cell type, at high throughput. Although shear based delivery methods have been demonstrated previously, they are unsuitable for some applications due to low viability and/or delivery efficiency11. The proposed technique, however, is distinct because it uses a physical constriction to deform and shear the cells in a controlled, reproducible manner. Unlike most current methods, this approach does not rely on electric fields, exogenous materials, endocytosis or chemical modification of the target molecule. Our data indicate that this method could be particularly advantageous for applications involving nanomaterials, proteins, or difficult-to-transfect cell types, such as immune cells and stem cells - all of which are often underserved by current methods.

We hypothesize that the rapid mechanical deformation of a cell, as it passes through a constriction with a minimum dimension smaller than the cell diameter, results in the formation of transient membrane disruptions or pores (Fig. 1a). The size and frequency of these pores would be a function of the shear and compressive forces experienced by the cell during its passage through the constriction.  Material from the surrounding medium may then diffuse directly into the cell cytosol throughout the lifespan of these pores. Such an approach could theoretically enable the diffusive delivery of any macromolecule small enough to fit through the pores. To implement this approach, we generated a family of microfluidic devices with different constriction dimensions and numbers of constrictions in series.

Each device consists of 45 identical, parallel microfluidic channels, containing one or more constrictions, etched onto a silicon chip and sealed by a Pyrex layer. The width and length of each constriction range from 4-8um and 10-40um respectively. The current design is typically operated at a throughput rate of 20,000 cells/s, yielding close to one million treated cells per device prior to failure, due to clogging. The parallel channel design was chosen to increase throughput, while insuring uniform treatment of cells, because any clogging or defects in one channel cannot affect the flow speed in neighboring channels (the device is operated at constant pressure). Prior to use, the device is first connected to a steel interface that connects the inlet and outlet reservoirs to the silicon device. A mixture of cells and the desired delivery material is then placed into the inlet reservoir and Teflon tubing is attached at the inlet (not shown). A pressure regulator is then used to adjust the pressure at the inlet reservoir and drive the cells through the device. Treated cells are collected from the outlet reservoir.

In order to illustrate our method's potential in addressing current delivery challenges, we conducted a number of proof-of-concept experiments using various nanomaterials and proteins of interest. Antibodies to tubulin, for example, were delivered (Fig. 1b) using this technique, yielding a diffuse distribution throughout the cell that would be consistent with cytosolic delivery. PEG1000 coated, 15nm gold nanoparticles were also delivered as measured by tunneling electron microscopy (TEM) of fixed cells (Fig. 1c). These nanoparticles appear to be mostly un-aggregated and are not visibly sequestered into endosomes. We were also able to verify the successful delivery of carbon nanotubes12 (encapsulated by a DNA oligonucleotide) by flow cytometry and Raman spectroscopy. The aforementioned materials are currently difficult to deliver to the cell cytosol and each material often requires a specialized modification to facilitate delivery. In our work, all four materials were delivered to HeLa cells using the same set of conditions on a 10um-6umx5 device. In addition, this method has demonstrated the potential to accommodate a diverse range of cell types, including embryonic stem cells and primary lymphocytes (Fig. 1d,e), thereby signaling its potential for use across a range of research and perhaps clinical applications. 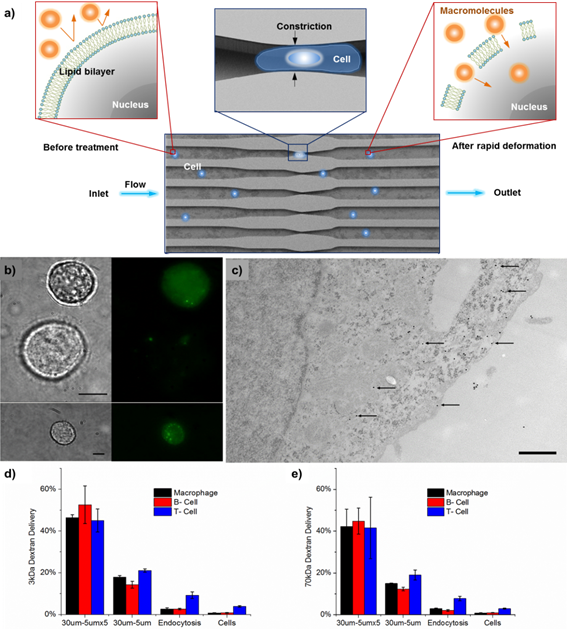 Figure 1. An overview of the delivery system and its capabilities. a) Illustration of delivery hypothesis whereby the rapid deformation of a cell, as it passes through a microfluidic constriction, generates transient membrane pores. Includes an electron micrograph of current parallel channel design with blue cells as an illustration. b) Fluorescent micrographs of HeLa cells immediately after delivery of antibodies to tubulin with an Alexa Fluor 488 tag. Scale bars at 5um. c) Tunneling electron microscopy (TEM) images of gold nanoparticles (some indicated by arrows) in a cell fixed ~1s after treatment. Scale bar at 500nm. d) Delivery of pacific blue labeled 3kDa dextran and e) fluorescein labeled 70kDa dextran to Macrophages (CD11b+), B lymphocytes (CD19+) and T lymphocytes (TCR+) derived from the blood of BL6 mice. The 30um-5umx5 and 30um-5um conditions denote two different device designs.

We have detailed a new method for cytosolic delivery that relies on the rapid mechanical deformation of a cell to induce transient membrane poration. This technique has demonstrated the potential to deliver a broad range of materials, some of which are challenging to use with current methods, to a variety of difficult-to-transfect cell types, including stem cells and immune cells. By providing such flexibility in application and obviating the need for exogenous materials or electrical fields, this method could potentially enable new avenues of disease research and treatment. Indeed our work has demonstrated this systems ability to deliver carbon nanotubes and antibodies to live cells – applications that could enable new sensing and imaging modalities.