Froth flotation is normally used to separate the valuable particles from the worthless gangue by taking advantage of the differences in physical properties such as hydrophobicity and hydrophilicity. Although it is a remarkably effective technology for recovering and concentrating hydrophobic particles, there remains a considerable scope for significant improvement. The recovery of fine hydrophobic particles in conventional flotation is very low compared to coarser particle recovery, though due to gravitational forces recovery decreases when the particles become too large. The exceedingly fine hydrophobic particles do not have sufficient momentum to collide with the air bubbles. These particles tend to follow the streamlines, avoiding collision (Figure 1(a)). Even when these particles deviate from the streamlines and collide, they may still have insufficient kinetic energy to rupture the air-liquid interface around the air bubble. These problems arise because of the viscous drag of water. Furthermore, fine hydrophilic particles, which contaminate the product, are difficult to remove because the liquid drains slowly from the froth. The hydrophobic product also retains significant moisture even after filtration.

This paper, which builds upon the previous work, is concerned with a new approach for selectively separating particles on the basis of their wetting properties. Here, a dry particle dispersion interacts with falling water drops (Figure 1(b)). The paper also outlines the basic laboratory systems used to test this concept. Hydrophilic particles pass directly through the gas-liquid interface of the falling drops, while hydrophobic particles choose to remain with the gas phase or adhere to the outer surface of the water drops. The underflow collection efficiency achieved for a range of particles interacting with a given flux of falling drops was determined experimentally.

The central process of selective collection is the wetting and particle adhesion. Thomas Young (1804) and Gibbs (1873) provided the foundation used today to describe the interfacial phenomena involved in wetting and adhesion. The basic thermodynamic criterion for the drop-particle attachment involves a finite contact angle at the line formed by the intersection of three phases. The contact angle is a quantitative measure of the wetting of a solid by a liquid (Chau, 2009) and indicates the affinity between the water and the solid (Nicol, 1992). If the contact angle has a higher value (measured through the water), the solid is described as hydrophobic and if a relatively small angle, is described as hydrophilic.

Figure 1: Comparison between particles interacting with bubbles in water and drops in air (a) Conventional Flotation (b) Proposed Selective Collection.

Two experimental approaches have been used to test this concept. Preliminary tests have been conducted using single water drops to test the validity of the phenomena at the drop level. Secondly, a laboratory scale experimental system has been designed and developed for detailed investigations of the concept at the multiple drop level.

Figure 2:  (a) Pendent drop of water saturated with glass ballotini.  (b) Pendent drop covered with coal while ballotini filled the inside of the drop

An experimental system was then designed and fabricated to test this novel concept at the multi-drop level in the laboratory. A schematic diagram of the initial prototype is shown in Figure 3. The system consists of a feed column, water distribution chamber mounted on a collision chamber and an air suction pump. Falling drops are surrounded by gas with a viscosity 100 times lower than the viscosity of water. The capture efficiency of the hydrophilic particles by the water drops should increase significantly due to the low viscosity of the air. In other words, inertial forces should dominate, hence ultrafine particles should engage with the gas-liquid interface. Hydrophilic particles covering a broad size range should pass through the interface with little or no resistance. Hydrophobic particles should fail to pass through the interface, and hence should remain with the gas phase or attach to the outside of the drops. Thus the proposed approach should result in improved separation kinetics. 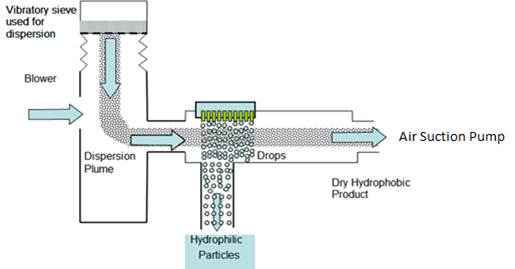 The feed was projected into the collision chamber horizontally while water drops were released from the water distribution chamber vertically. The particles were fed to the system in multiple 10g portions within a time period of 30 seconds between each portion, while maintaining a constant water drop size and flux.

The dispersion then collided with the water drops, with the hydrophilic particles (silica) engulfed. Water collected at the base of the chamber, and then drained into the underflow collection tank. The recovery of the particles in the underflow was calculated relative to the total feed that passed through the experimental system. In all of these experiments the velocity of the air stream and hence the velocity of the particles was kept constant.

The results from these experiments produced a linear correlation between the recovery of the particles in the underflow and the water flux. The underflow recovery for two types of particles provided a measure of the selectivity of the process. The selectivity of different samples of glass ballotini (glass ballotini as received from the commercial pack and glass ballotini treated with ExtranÛ to clean the surface) were tested initially. The results were found to be reproducible, hence the experimental system was found to be reliable. Interestingly the experimental data indicated some selectivity between the ballotini samples, as received, versus those that were cleaned, though the difference was slight (Figure 4). 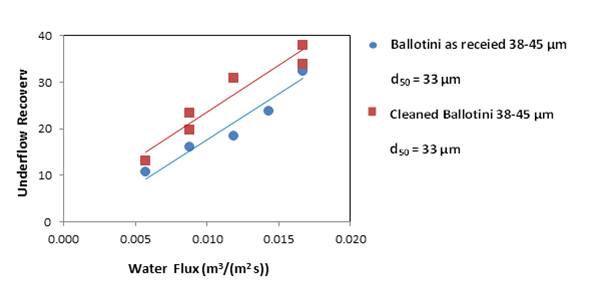 One key advantage of the technique described in this paper is that the hydrophobic product obtained is dry. Overall, there was clear selectivity measured, dependent on the particle size and other surface properties of the material. Further work is needed to study other variables such as the air flow velocity, and water chemistry, as well as mixtures of hydrophobic and hydrophilic particles. Given the limited selectivity observed, however, it is unlikely that this concept will develop into a new technology competitive with conventional froth flotation.

The authors thank the Australian Coal Association Research Program (ACARP) for financial support for this work.

Chau, T.T., 2008. A review of techniques for measurement of contact angles and their applicability on mineral surfaces, Minerals Engineering 22 (2009) 213-219