The genotypic and phenotypic diversity among organisms, or even cells in the same population, often undermines the function of synthetic genetic devices. In addition, advances in genetic engineering, such as recombineering or in vivo evolution, enable fast modification of dozens and possibly hundreds of genes at once in bacteria. The efficient manipulation of the host genome can potentially have a strong impact on global gene expression and regulation, and affect the output of genetic circuits designed for engineering cellular functions.

We are investigating how the genotype of the host, through phenotypical and regulatory factors, affects the output of genetic circuits in the bacterium E. coli. Synthetic genetic circuits comprising three bright, fast-folding reporters, expressed from constitutive promoters, are used as model. By using a comprehensive library of single-gene deletions (the KEIO collection), we measured the impact of each gene on global and sequence-specific levels of activity of our model circuits (Fig. 1A). We use high-throughput strain handling and data acquisition to measure circuit output and cell-cell variability (noise) in each strain of this collection of knockouts, and mathematical models to fit measures of fluorescence and OD (Fig. 1B).

We first analyzed several parent strains of E. coli and found that the output of all expression units on our model circuit strongly depends on the specific host in which they function (Fig. 2A). We have measured several cellular physiological factors, such as the rate of growth or the ribosome content, and found good correlation between expression levels and these for all but the DH1 parent strain of E. coli (Fig. 2B).

We continued our investigation starting with a group of 90 KEIO strains and found that the activity of our model circuits is not invariant to even single-gene differences in the host genetic make-up. We identified various genes that, although have no known function in gene expression regulation, significantly affect circuit activity (Fig. 3). In particular, knockout of several two-component signal transduction pathways, such as the genes qseB, creC, zraS and atoS, significantly decreased circuit performance at least 2-fold. Alternatively, circuit output in deletion backgrounds for some metabolic enzymes, such as tktA, or the global transcriptional regulator narL was increased 2-fold or more (Fig. 3).

By using different circuit configurations, and their correlation, we are in the process of identifying sequence-specific and global effects in these initial 90 knockout backgrounds. In addition, we are expanding our analysis to include all ~3800 strains of the KEIO collection, which is elucidating the role of each gene of the E. coli genome in cellular homeostasis from the view-point of synthetic genetic circuit functionality.

We believe that our systematic analysis of host-circuit contextual effects will help elucidate novel epistatic interactions in E. coli, better understand the genotype-to-phenotype association and improve predictability of forward engineering with synthetic devices in synthetic biology. 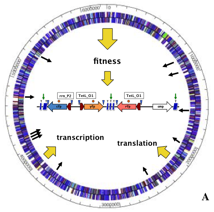 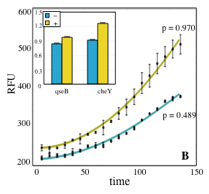 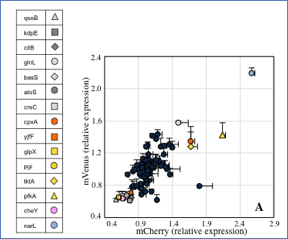 Fig. 3.  Single-gene deletions in the host genome could impact the level of gene expression.