Various processes in chemical and biochemical industries involve dispersion of gas into liquid in stirred tank reactors. The complexity within the reactors are extremely high due to turbulent flow induced by impeller, interactions between the dispersed-gas and liquid phase, and interactions within the dispersed-gas phase. A simulation method that provides realistic description of the multiphase flow within the reactors is a valuable tool for design, optimization, and scale-up of such processes.

We present a novel simulation method for gas-liquid stirred reactors including bubble breakage and coalescence [1]. The filtered conservation equations for the liquid phase are discretized using a lattice-Boltzmann scheme. A Lagrangian approach with a bubble parcel concept is used to represent the dispersed-gas phase. Bubble breakage and coalescence are modeled as stochastic events. The momentum coupling between phases is realized through the  source term in the conservation equations resulting in the so-called four-way coupling. The action of the reactor's components on the dispersed-gas and liquid phases is described using an immersed boundary condition.

The present method was used to simulate gas-liquid flow in a stirred reactor following the experiments of Montante et al. [2]. The predicted number-based mean diameter and long-term averaged liquid velocity components agreed qualitatively well with the experimental data (Fig. 1). Effects of the presence of the dispersed-gas phase and the gas flow rate on the hydrodynamics were numerically studied. 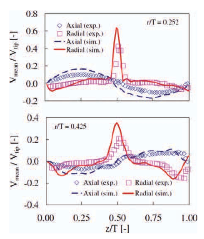