The worldwide energy crisis intensifies, and more people pay their attention to the field of new energy technology. Batteries, as an important branch of the new energy technology, have been brought out frequently. With technology being evolved steadily, ion exchange membrane has been widely applied in the batteries. Indeed, it has become a core component of Direct Methanol Fuel Cell(DMFC), and so on.

In this work, a novel fluorinated poly(aryl ether oxadiazole)s ionomer with diallyl ammonium groups (FPAEO-DA-x) were synthesized via copolymerization of 2,5-bis(2,3,4,5,6-pentafluorophenyl)- 1,3,4-oxadiazole (FPOx) and diallyl bisphenol A (DABPA) bromination of the allyl and imidazolidation with N£methylimidazole (NMI). The anion exchange membranes were obtained by solution casting method and followed by hydroxide exchanging in sodium hydroxide solution. The chemical structures and properties of the FPAEO-DA-x membranes were studied. The highest ionic conductivity of the FPAEO-DA-2 membrane was achieved at 2.12°Á10-2 S cm-1 in deionized water at 80 °ć. The swelling ratio and TGA properties of the FPAEO-DA-x membranes revealed their good mechanical and thermal stability. Moreover, the FPAEO-DA-x membranes showed excellent solubility in low boiling point water-soluble solvents such as methanol, which would be helpful for membrane electrode assembly preparation. The FPAEO-DA-x membranes showed great potential for alkaline electrolyte membrane fuel cells (AEMFCs) applications 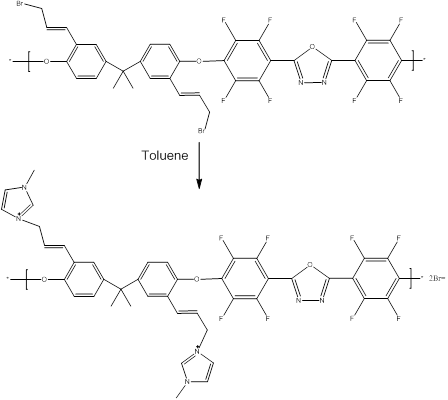