265119 Production of Hydrogen From Dimethyl Ether Over Promoted Bifunctional Catalysts

Hydrogen fuel cells generating electricity from hydrogen and oxygen show higher energy efficiency than Carnot cycle, which the byproduct is only water. Its main fuel is hydrogen or hydrogen-rich gas. Dimethyl ether (DME) is an ideal liquid fuel as hydrogen carrier due to its high H/C ratio, high energy density and ease storage and transportation. Furthermore, DME is inert, non-carcinogenic, non-mutagenic, non-corrosive, and virtually non-toxic. It can also be conveniently stored and handled because its physical properties are very similar to those of LPG. DME will, therefore, play an important role in the future's energy supply system.

According to the SEM images, the copper particles in the Cu/¦Ă-Al2O3 prepared with impregnation coupling with intermittent microwave heating method were finer and more uniform distributed than that in the Cu/¦Ă-Al2O3 prepared with impregnation method. Cu/¦Ă-Al2O3 (imp) consisted of large particles (about 5 µm and above) with a platelike morphology. In addition, it also could be found that the surface of carriers ¦Ă-Al2O3 prepared by the imp-IMH method was less smooth, which may be attributed to that the frequency of microwave radiation ranging from 0.3 to 300 GHz could make the ions migrate and the dipolar molecules rotate. Therefore, microwave heating is more interesting method to prepare catalyst as compared to conventional heating. The catalysts made by imp-IMH had the higher hydrogen yield and DME conversion, and the better stability.

Fig.1 DME steam reforming over Cu/¦Ă-Al2O3 (a) the hydrogen yield and DME conversion, and 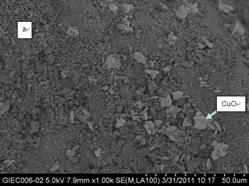 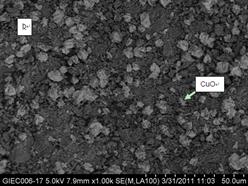 Fig.2 SEM images of the catalysts 12wt% Cu/¦Ă-Al2O3 prepared with (a) impregnation method, and (b) impregnation coupling with intermittent microwave heating method.