Simulated moving bed (SMB) chromatography is a powerful continuous separation technique that is being used for more and more applications in the food, petrochemical, and pharmaceutical industries. In practice the SMB operation is difficult to optimize, especially in cases where the adsorbing components of a mixture have nonlinear isotherms. Due to the complex dynamics SMB operators commonly use heuristic approaches and manual tuning to find operating conditions that satisfy high purity constraints with some safety margins. These operating conditions may be conservative and achieve suboptimal productivity or desorbent consumption.

We propose the prediction-correction method which uses model-based optimization, SMB experimentation, and parameter estimation to optimize the SMB operation in a systematic manner. The prediction-correction (PC) algorithm (Figure 1) is designed to improve the process development stage of SMB operation by rapidly finding the optimal operating conditions that achieve design objectives. We use an iterative scheme where the optimal operating conditions are predicted by solving a model-based optimization problem and these are implemented in the SMB. Then the model parameters are refined by fitting our model to the SMB experimental results. The refined parameter set is used to again predict the optimal operating conditions and these are successively implemented until the termination criteria are satisfied. Thus, the PC method reduces the task of SMB process development into solving a sequence of computational problems.

We show that the PC method was successfully used to optimize the separations of linear and nonlinear isotherm systems. For the linear isotherm system we used uridine and guanosine, and for the nonlinear system we used cyclopentanone and cyclohexanone. For both systems the PC method was successfully used to find optimal operating conditions where greater than 96% purity is achieved in each product stream while maximizing productivity. The SMB experiments can be terminated before reaching the cyclic steady state, and the operating conditions can be updated online. In Figure 2 we show an example from the linear system results of how the optimal operating conditions are achieved, and the PC algorithm converges in only three iterations.

The PC algorithm can also be used to identify a sufficient adsorption isotherm model for SMB optimization. We show in a case study with cycloketones that a single-component Langmuir isotherm was updated to a competitive Langmuir isotherm, which led to better fitting.  This isotherm model update allows the PC algorithm to find the optimal operating point quickly with greatly increased productivity, while it may result in suboptimal productivity without the isotherm update. 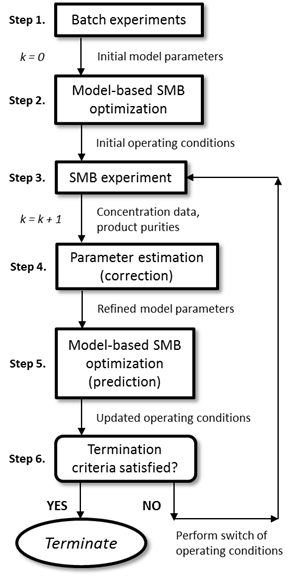 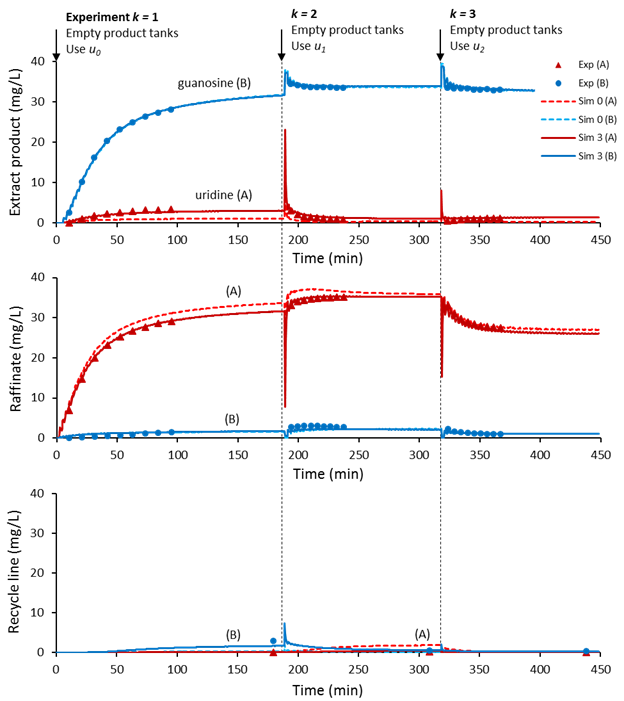 Figure 2. SMB experimental concentration data and simulated concentration profiles using our model. The product purities are improved by implementing optimal operating conditions, ui once the model parameters are refined by fitting the previous experimental data set in each iteration k.