Portable fuel cells are very attractive power generation sources due to their potential for high energy density and high efficiency. Particularly, portable hydrogen fuel cells have received significant attention in the transportation industry, since they offer opportunities for zero-emission power generation. However, the difficulty associated with compact storage of hydrogen gas has been a major obstacle to achieving high energy density in this technology. To this end, we are developing a new class of catalytic microreactors which utilize the high volumetric energy density of liquid hydrocarbon fuels (conventional or renewable) and serve as fuel reformers to produce hydrogen on-demand.

The direct droplet impingement reactor (DDIR) is a catalytic reformer of liquid hydrocarbon fuels. DDIR has been developed as a novel method for portable catalytic reforming of liquid fuels by atomizing the liquid with precise control over droplet characteristics, having the droplets impinge in a well-controlled manner on a heated catalyst to react and produce hydrogen.[1,2] Compared to other portable liquid fuel reforming technologies, which are commonly designed as scaled down versions of large reactor systems but utilizing miniaturized components for process intensification, DDIR design focuses on maximizing the power density of the reactor by understanding the fundamental physics and chemistry of transport-reaction interactions and optimizing the components in the system-level framework.

In order to achieve the goal of the maximum power density, the fundamental concept of DDIR is embodied into various configurations which offer some unique advantages for different modes of operation. The two types of DDIR-based reactors that have been analyzed in this study are (i) an ideal continuous-flow membrane reactor for steady-state operation and (ii) a batch membrane reactor with a variable volume for transient operation. The latter concept is based on adaptation of a hybrid configuration in which the DDIR is coupled to the CHAMP (CO2/H2 Active Membrane Piston) reactor pioneered by our research group[3]. The most unique feature of the CHAMP reactor is an active piston that enables precise control of reactor volume (Figure 1). This attribute allows dynamic control of residence time and reactor conditions to achieve optimal reaction and separation processes [4].

The CHAMP-DDIR is developed to combine the advantages of two reactor design concepts:

Figure 1 summarizes activities in the development of various DDIR family reactors in this study. The first activity is a comparison study between an ideal CF-DDIR that represents the steady-state continuous-flow operation of the reactor and the baseline CHAMP-DDIR for transient, variable volume operation. This first study revealed that the power density of both reactors increases monotonically with pressure, and, that for a given pressure, the CHAMP-DDIR power density at its optimal temperature is always higher than that of the CF-DDIR at its own (different) optimal temperature. The fundamental reasons for the superiority of the CHAMP-DDIR is its ability to maintain an elevated pressure in the reaction chamber due to an active volume control, irrespective of the rate of fuel conversion and hydrogen permeation, along with relatively minimal power penalty associated with active compression of reactants.

Based on insights gained from the initial study, two new types of CHAMP-DDIR, which exploit a dual-chamber design, were considered, and the models describing their behavior were formulated and implemented. The key attractive characteristic of the dual-chamber CHAMP-DDIR is a zero-dead-volume reaction chamber, and the two reactors differ in terms of piston control: one has a free-piston, and the other posses an actively controlled piston. To understand and quantitatively assess if the reduction in dead volume translates to an increased power density, a comparison study was performed for the three types of CHAMP-DDIR (the baseline single-chamber/active-piston, a free-piston/dual-chamber, and an active-piston/dual-chamber configurations). Finally, a new hybrid CHAMP-DDIR is proposed to integrate the key insights and findings form this study. 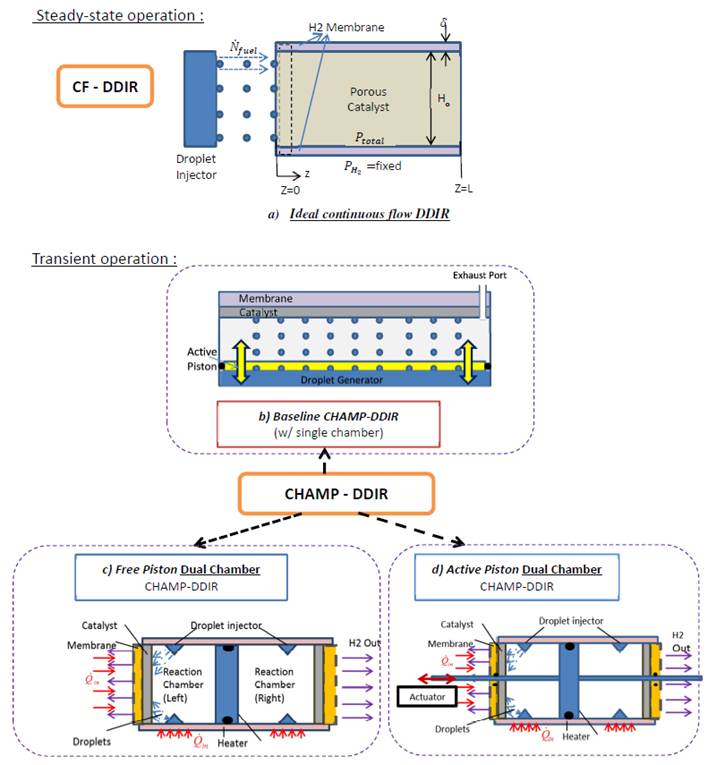 For the baseline comparison of CF-DDIR and CHAMP-DDIR, ideal conditions for each reactor operation were assumed, and two models were developed.  For the ideal CF-DDIR, an isothermal plug flow reactor model is developed for advection-reaction phenomena, including effects of hydrogen permeation (Figure 1. a).  For the CHAMP-DDIR, an isothermal variable volume batch model is developed and the effects of hydrogen permeation were included (Figure 1. b). Other important assumptions for both models are (1) Transport limitations are not included within the reactor volume; (2) Catalytic reactions proceed at their intrinsic rates as predicted by the detailed kinetics model from the literature; (3) Separation of hydrogen is limited by the intrinsic membrane permeability, which is a function of temperature and partial pressures of all species present (4) Uniform pressure exists in reactor due to fast equilibration (on the time scale dictated by the reaction kinetics).

A parametric comparison study was performed with the developed models to achieve the level of understanding and to develop insights necessary to identify the design trade-offs for reactor optimization.  Focusing on portable/mobile power applications, the primary performance metric was chosen to be a volumetric power density of the reactor. Pressure, temperature, steam-to-fuel ratio at the inlet, residence time and geometry of the reactor are selected as independent parameters to find optimal conditions resulting in the highest power density. The important findings from the study are:

·         Tradeoff exists between power density and hydrogen yield, which can exploited depending on the specific target application;

·         Power density of CHAMP-DDIR is always higher than that of the CF-DDIR, for the same pressures and operating each at its optimal temperature;

·         Power density increases monotonically with the pressure increase in the reactor, so the reactor operation at elevated pressures is favorable from the performance point of view; and

·         For a given geometry of reactors (Figure 1), maximum power density is achieved when the volume (distance) separating the point of reactant injection and the catalyst is the smallest.

The concept of dual-chamber CHAMP-DDIR was developed to improve performance of a baseline ideal CHAMP- DDIR. The main motivation for the dual-chamber variable volume design is to eliminate volume by designing a reactor in which the reforming reaction occurs on both sides of the piston. Two types of dual-chamber CHAMP-DDIRs are conceptualized based on the piston movements – free piston and active piston. Figure 1.c and  Figure 1.d show the simplified configurations for both arrangements, respectively. The key operational characteristics of the both dual-chamber CHAMP-DDIR is that each chamber runs in different (lagging in time relative to one another) sequences linked by the motion of piston, which affects each chamber's volume and pressure. In both chambers, reaction occurs in a cycle with the same profile (i.e., time evolution of pressure and volume), but a half-period phase lag exists between cycles in two chambers.

Figure 2 shows the power density comparison for all types of DDIR family reactors, including steady-state continuous flow (CF) operation and different embodiments of CHAMP-DDIR. The results are shown for simulations with maximum pressure at 8 bar, 88% hydrogen yield and optimal temperature for each reactor. The baseline CHAMP and the active-piston/dual-chamber CHAMP performances were nearly identical, and the possessed the highest power density of all reactors under investigation. Considering practical aspects of reactor design and operation, we conclude that a baseline CHAMP-DDIR is not only the best performing reactor in power density, but it also simple in design and operation, as compared to its dual-chamber versions with active and passive pistons.

The authors acknowledge financial support of this work through NSF CBET Grant 0928716, which was funded under the American Recovery and Reinvestment Act of 2009 (Public Law 111-5). Any opinions, findings, and conclusions or recommendations expressed in this publication are those of the authors and do not necessarily reflect the views of the National Science Foundation.