263628 Frame Invariance in the Simulation of Single Screw Extruder

With a production volume of 280 million tons per year the polymer industry is one of the major fields in chemical industry. Polymer extrusion is probably the most important operation in polymer-processing being used for example for reactions and forming processes. Understanding and predicting the flow in an extruder is therefore an important task in view of defining and improving the final product quality.

Often the kinematics are created by keeping the screw stationary and rotating the barrel instead of rotating the screw, which is done mainly because this results in a more simplified modeling approach. The question of whether this simplification can be made and the obtained results are identical is still under examination, see for example Campbell et al. [1] and Rauwendaal et al. [2]. The conclusions are commonly drawn for simplifying geometries and conditions such as unwrapped channels, in which the curvature is neglected [1]. In this work we aim at clarifying this issue by doing a rigorous CFD-modeling and showing whether the results can be transferred into each other both in two and three dimensions. We therefore developed a technique, which rotates the whole mesh and subsequently corrects all variables according to the given rotation.

Transport of a passive scalar

The kneading and mixing behavior of the extruder is of major interest. The behavior can be determined by examining the transport of a passive scalar according to:

Fig. 2 shows streamline plots for both cases. When rotating the extruder, the primary velocity field is obtained, wherefore if the barrel is rotated, the secondary flow field is revealed. Fig. 2 clearly proves that the velocity fields can be transferred into each other by vre = vrb – ω x r (cf. the two figures on the right hand side).

We extended the simulations towards three dimensional simulations using a mesh of over 3,000,000 cells as being shown in Fig. 3a. The results shown in Fig. 3b prove that the results can be interchanged into each other even in three dimensions. The red line shows the velocity profile in the centerline when rotating the barrel. When doing the transformation vre = vrb – ω x r the resulting velocity profile (red marks) almost perfectly matches the profile when rotating the extruder (back line) and almost no deviation can be perceived. 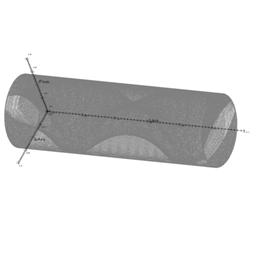 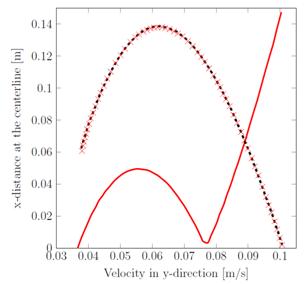