263586 CFD Simulation of Non-Isothermal Flows of Viscoelastic Fluids in 4:1 Contractions

Non-isothermal viscoelastic fluid flows can be found in a wide range of industrial applications such as injection molding, polymer blending and extrusion processing. It is of course of major importance to understand and predict such type of flows. Fortunately, numerical simulation evolved as an important tool to guide the engineer in the task of developing and improving such processes. However, there is still a gap between the engineer's needs and the current state-of-the-art, especially in complex flows such as is the case for non-isothermal viscoelastic fluids flows.

We therefore focus our research on developing a comprehensive CFD method to simulate such type of flows. In this work, focus is set on the thermo-rheological modeling and the numerical method. Furthermore, we apply the developed model to simulation of non-isothermal viscoelastic contraction flows.

In viscous fluids, mechanical energy is fully dissipated as heat, whereas in solids the mechanical energy is stored and can be released into mechanical energy again [1]. The behavior is known as pure entropy elasticity and energy elasticity, respectively. Viscoelastic fluids behave in between those of fluids and solids. As a result, viscoelastic fluids do show both of the aforementioned behaviors, which severely complicates the thermo-rheological modeling. One of the present approaches uses an a-priori defined split factor [2], which is being adopted in this work. 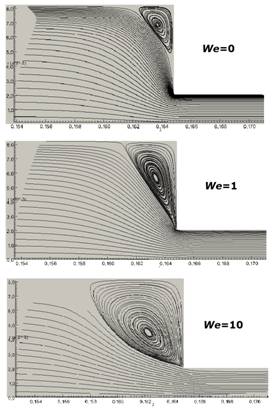 Fig. 1: Streamlines for different Weissenberg numbers in an axisymmetric contraction.

The Oldroyd-B model is used to model viscoelasticity [3]. Temperature dependence of the viscosity and the relaxation time is modeled with the Williams-Landel-Ferry model (WLF) [4].

The finite volume method is used for discretization. Special attention has to be paid to the convection scheme, which has a major influence on the accuracy and stability of the numerical method. We therefore evaluated several state-of-the-art differencing schemes in a stagnation point flow. The DEVSS technique is used to explicitly stabilize the solution method by introducing an elliptic operator into the momentum equation [5].

Contraction flows are extensively studied in literature. Especially for viscoelastic fluid flows, this is an important test case, aiming at the stability of numerical algorithms due to the singularity at the reentrant corner. The failure in obtaining converged solutions at high Weissenberg numbers is probably the central problem in literature, which is known as the High-Weissenberg-Number-Problem (HWNP).

In this work, we were able to obtain converged solutions up to Weissenberg numbers of We = 10 for an axisymmetric contraction, see Fig. 1. As expected, the recirculating flow length increases with increasing Weissenberg numbers and the vortex area becoming more bulgy, see also Fig. 1. Initially the vortex is solely at the salient corner, but from We = 1 the vortex connects with the re-entrant corner.

When imposing a temperature jump at the walls in the area of the contraction, we find the vortex length to increase with increasing temperature jump, see Fig. 2. Herein, pure entropy elasticity was assumed. 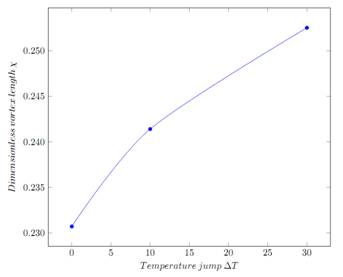 Fig. 2: Dimensionless vortex length as a function of the temperature jump at the contraction for We = 1.

In this work we developed a general finite volume model capable of simulating non-isothermal viscoelastic fluid flows. The model was used to simulate axisymmetric 4:1 contraction flows and results were obtained up to a Weissenberg number of We = 10. The recirculating flow length was found to increase both with increasing Weissenberg number and temperature jump.