The American Cancer Society 2012 estimate is that 22,910 malignant tumors of the brain or spinal cord will be diagnosed in the United Sates. Approximately 59.8% will be fatal. Despite current treatments, survival remains low with a median survival of approximately one year despite maximal therapy. Complete tumor removal cannot always be achieved because of the potential for brain damage, leading to cancerous regrowth and ultimately, patient death. In addition, these tumors can develop drug resistance, rendering chemotherapy ineffectual. We believe that the development of a topical, slow release, multi-drug delivery system (M-DDS) that is applied post-surgically directly in the tumor cavity could significantly increase life expectancy. Our M-DDS consists of multi-drug loaded poly(lactic acid) (PLA), poly(lactic-co-glycolic acid) (PLGA), and poly(ε-caprolactone) (PCL) microspheres suspended in an aqueous solution of  a degradable, thermoresponsive poly(N-isopropylacrylamide) (PNIPAM) synthesized in our laboratory. At room temperature, PNIPAM suspends drug encapsulated microspheres that can be directly “sprayed on” the post-surgical site. The 37°C temperature of the brain would pass PNIPAM through its lower critical solution temperature, causing the polymer matrix to solidify and form an adherent gel layer with entrapped drug loaded microspheres on the surface of the brain. This would provide intimate contact with the remaining tumor cells, conforming to the convoluted morphology of the brain surface. Over time PNIPAM would degrade along with PLGA, PLA, and then PCL microspheres, releasing multiple chemotherapeutics at different rates directly to the tumor remnants to inhibit cancerous re-growth. This work focuses on microsphere characterization, model drug (rhodamine B (RB)) and chemotherapeutic encapsulation, and RB release from microspheres and microspheres entrapped in PNIPAM.

Both double and single emulsions have been applied to form PLA, PCL, and PLGA microspheres. Smooth, nonporous microspheres were produced with an adjustable size dependent on impeller speed during the emulsification process. RB, a hydrophilic dye and the model drug, was successfully encapsulated within PLA, PCL, and PLGA based microspheres and microsphere morphology remained unaffected. The encapsulation efficiency was polymer dependent; PLGA was most efficient at RB incorporation (84.6 ± 4.8%) due to its hydrophilic nature. An in vitro release from PLGA microspheres alone and PLGA microspheres entrapped in degradable PNIPAM was characterized in PBS at 37 °C. A biphasic release profile was seen for both conditions, with an initial, moderate, continuous release (passive diffusion) followed by a significant increase in the release curve slope (polymer degradation) before plateauing. Microspheres entrapped in PNIPAM had a two day delay of release compared to microspheres alone, with the release plateau occurring at day 22 versus day 20. In both instances, smaller microspheres (22.5 ± 7.8 µm) released faster than the larger microspheres (42.2 ± 15.4 µm) during the diffusion period due to a higher surface area to volume ratio, showing release profile tunability.

Our M-DDS has also been tested to visualize local and topical delivery on brain tissue. RB encapsulated PLGA microspheres suspended in degradable PNIPAM were “sprayed on” a rat brain that was preserved at 37 °C. The PNIPAM solution underwent a phase transition on the rat brain, showing stable adhesion to the tissue and efficient entrapment of drug loaded microspheres to a localized site (Figure 1). 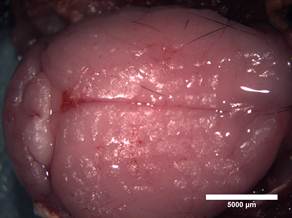 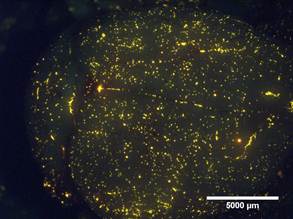 Figure 1: Sprayed RB encapsulated PLGA microspheres entrapped in degradable PNIPAM on a rat brain at 37 °C viewed with a) bright field and b) fluorescent microscopy 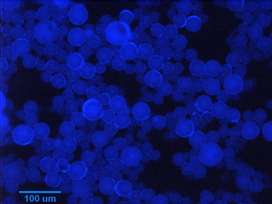 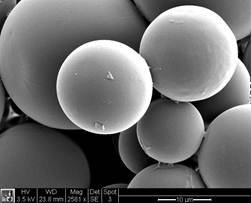