Hydraulic fracturing is a process used to recover natural gas from deep shale formations.  Large amounts of water, sand and chemical additives are pumped, under high pressure, to create fractures, allowing the released gas to travel to the surface.  While fracking increases access to natural gas, the water is contaminated with a variety of chemicals, some carcinogenic.

In this study, we developed a biomaterial to be used for biodegradation of chemicals found in fracking water.  We have shown active degradation of several of these chemicals by Pseudomonas putida NCIB 9816 and Mycyobacterium vanbaalenii PYR-1 encapsulated in a silica/polymer matrix.  The porous matrix allows for diffusion of nutrients into the cells for continued long-term viability and degradation activity, while providing controlled isolation from the environment and enhanced stability.

The porous matrix was comprised of silica nanoparticles Ludox TM40 (40%w/w) and the precursor Tetramethyl orthosilicate (TMOS, 98%), along with polyethylene glycol (PEG, Mw = 600Da).  Porous gels were formed by diluting silica nanoparticles in ultra-pure water.  PEG was added at a volume ratio of 1:4 and the solution was vortexed for 10min.  Separately, TMOS was hydrolyzed by sonication in water and 0.01M HCl in a volume ratio of 1:1:0.1, respectively.  The hydrolyzed solution was mixed with the TM40-PEG solution at a volume ratio of 1:2.  Finally a cell suspension (0.2g/ml) was added to the mixture at a ratio of 1:1.  Using emulsion, the solution was transferred to a syringe and added drop wise to mineral oil to form beads.  Beads were rinsed thrice in PBS prior to assaying and storage.  Encapsulated cells were stored at 4° C in 10 mL scintillation vials containing 1.0 mL minimal medium (Stanier's medium or PBM) and 1.0 mL of silica-encapsulated cells.

Naphthalene degradation pathway gene activity was assayed using biphenyl as a substrate and determining the formation of the yellow ring cleavage product 2-hydroxy-6-oxo-6-phenylhexa-2,4-dienoate  at 435 nm.  5 µL of saturated biphenyl in ethanol was added per mL of sample before incubation at room temperature with shaking at 200 rpm.  1mL of bead material was submerged in 5 mL of PBS prior to the addition of biphenyl, but due to the very low aqueous solubility of biphenyl much of the material precipitates out of solution.  Despite this low solubility, biphenyl is available to the encapsulated cells and linear degradation curves can be observed (Fig. 1).

Aromatic ring dioxygenase activity in M. vanbaalenii PYR-1 encapsulated and free cell samples was determined using dibenzothiophene as susbstrate (3). A 5.0 µL aliquot of a dibenzothiophene solution in dimethylsulfoxide (33 mg/mL) was added per mL of sample.  Samples were incubated at room temperature, with shaking at 200 rpm, and absorbance was measured at 474 nm to detect the formation of the orange colored product trans-4-[2-(3-hydroxy)-thianaphthenyl]-2-oxo-3-butenoate described by Kodama, et al. (4). To increase activity in samples stored for long periods, samples were induced with 8 mM sodium benzoate and incubated at room temperature, with shaking at 200 rpm for 60 min. Samples were then washed and resuspended in fresh medium prior to assay.

Metabolically active cells are required for these complex biodegradation pathways to be functional.  Silica gel-encapsulated P. putida NCIB 9816 maintained approximately 60% of the original naphthalene degradation activity after being stored for 7 days (Fig. 1) and 20% of original activity after 42 days of storage, at which point stability experiments were stopped (Fig 1.).  There was not a significant difference in activity for encapsulated NCIB 9816 when naphthalene was added to the media for storage (data not shown).

In encapsulation experiments with M. vanbaalenii PYR-1, cells maintained approximately 50% of their original activity after being stored for 4 weeks at 4° C (Fig. 2). In comparison, free cell samples maintained approximately 35% of original activity after 4 weeks (data not shown). The data suggests that silica encapsulation may play a role in increasing the longevity of metabolic activity in M. vanbaalenii PYR-1 cells. 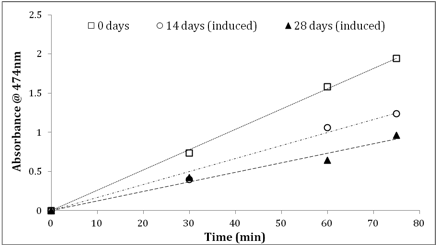 Fracking fluid water is contaminated with potentially harmful chemicals.  The biomaterial described here demonstrated that PAH degradation pathways can be active for up to 42 days.  The silica/polymer matrix creates a confined environment while still allowing nutrient delivery for continued activity of degradation pathways. We propose further development for the use of degrading harmful fracking fluid chemicals.